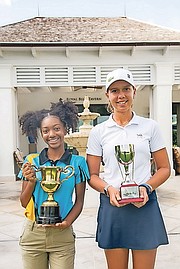 NINE rounds of intense golf competition culminated over the weekend as the Sands Beer Cup rolled into New Providence for two days of championship play. The event held at Baha Mar’s Royal Blue Golf Course saw some of golf’s best and brightest talents tee off for the coveted title of the Sands Cup champion.

The proposal to host the annual golf competition was immediately supported by Sands Beer CEO James ‘Jimmy’ Sands, who is an avid golfer himself, and began as a way to celebrate the sport he loved. Over the past three years, the games played on Grand Bahama, Exuma and New Providence have given scores of professional and amateur players around the country the opportunity to hone their skills and improve their games and standings.

The start of the competition began this past April at the Grand Bahama Open held at Lucayan Reef Course, with a second cup game in May at the National Amateur Golf Championships.

Similar events were also held on the island of Exuma before returning to New Providence for the Lyford Cay Classic in August.

Headed into the finals, three players - Nyah Singh, Heathcliff Kane and Jenna Bayles - were tied for the lead with 188 points each.

“This year our top three finalists were all junior competitors,” explained Lynford Miller, the president of the Bahamas Golf Association “It’s not only a testament to the growing popularity of the game here in the Bahamas but also the natural ability that exists particularly among our youth players.”

Though the game day was marred by continuous rain, the championships continued with golfers playing 12 holes instead of the standard 18. “This year we, unfortunately, experienced quite a bit of rainfall,” said Miller. “Both days of competition were wet, which made the last six holes become unplayable and were therefore closed by course officials.”

As a result, this year’s winners were chosen based on the best five of nine rounds instead of the usual best five of 10. Nyah Singh emerged as the winner of the 3rd Sands Beer Cup, having accumulated a blistering 31 points over 12 holes even in wet and windy conditions.

Singh, who joins the ranks of previous winners Ural Pratt Jr and Stephen Johnson, was in 3rd place going into the 9th round, 7 points behind the leaders Heathcliff Kane and Jenna Bayles. She, however, put on an impressive show, playing extremely well in the final two days to claim the Cup. Bayles finished 2nd and Kane was 3rd, with 23 and 20pts respectively, in the final round.

“We’re very excited to see the growth that the Sands Beer Cup has experienced over the past three years,” said Wellington Seymour, executive sales and marketing manager.

“Each year, I’m more and more impressed by the quality of the players we see and with junior athletes claiming the top spots. It’s clear that the future of golf in the Bahamas is bright. Bahamian Brewery is proud to be a part of the continued development of the sport, and will continue to support the game while we complete the restoration of our brewery of facilities.”