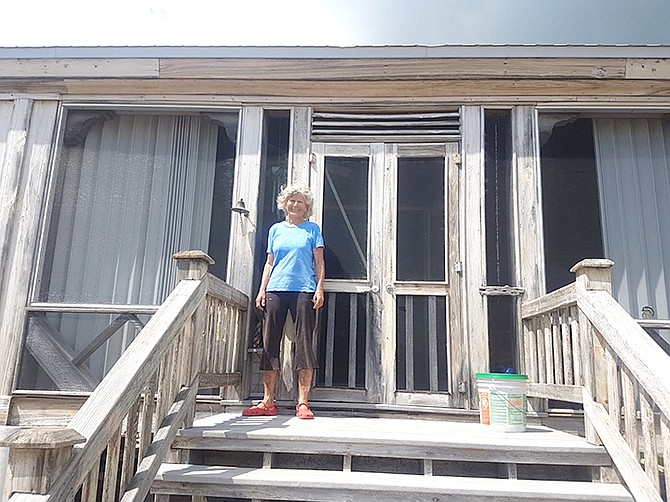 Mary Thaysen outside her home in East End.

WHEN Mary Thaysen built her “Category Five” house in East End, everyone “teased” her about it.

But homes were destroyed and swept from their foundations in East Grand Bahama during Hurricane Dorian, hers remained intact, withstanding the wrath of the monster storm as it sat over the island for two days with more than 155 mph winds and 20ft storm surge.

She was not on the island when Dorian came on September 2 but had seen pictures of the devastation on Grand Bahama and had expected to see some damage to her house, which is near the beach.

Shockingly, when she returned, the house was in near perfect condition. Only one wood panel on the outside had been split or chipped when something struck it during the storm. There was no flooding inside and no roof damage, and not one shingle was blown off or out of place.

When The Tribune visited the area recently, Ms Thaysen and her son, Matthew, spoke about their resilient house near the beach.

“I call it my Category Five house and they all teased me about it,” she said. The elevation of the land is 17-ft above the sea level, and the house is built on five-feet concrete columns.

Being raised in Miami and having been through a lot of hurricanes, Ms Thaysen did a lot of research before building her house in Grand Bahama. Her son and Vance Roberts were the builders.

Instead of the usual concrete blocks, it was built of cypress wood. Instead of tiles or regular shingles, aluminum interlocking roof shingles were placed on the roof. She had a cupola built on top of the roof to keep the house cool, and has installed some expensive vents on it that prevent rainwater from getting inside.

Ms Thaysen stayed in her home during Hurricane Matthew in October 2016, and said the experience was very scary.

“This year I had to go to the doctor, but I wouldn’t have wanted to be here for (Dorian). Matthew scared the hell out of me with all the tornadoes,” she said.

“The house is all bolted together with big cypress wood; I had no flooding in the house, and my solar panel is still outside attached to the roof.”

“The termites are not supposed to like it. And I did not have much money because I was retired. I had this lot since my brother was on the US Missile Base, and my dream was to be here on a big porch,” she said.

All of the concrete houses in Gambier Point, East End, had sustained severe damage and flooding. Some residents reported having eight feet of water in their homes. One house in the area was also completely submerged by the surge.

Resident Terrence Laing had flooding almost to his ceiling. He and four members of his family were able to survive by wearing life vests. They had to put his niece, who is unable to walk or talk, on a mattress.

That was the scenario for most of the homes in East End - Gold Rock, Freetown, High Rock, Rocky Creek, Pelican Point, and McLean’s Town on the mainland, and in Sweeting’s Cay.

“I saw pictures someone sent me and I expected something like (Hurricane) Andrew. I built a home in South Dade where Andrew hit, but you have to build based on the terrain – and not such much looks. I did all my research on the beaches and I took pictures - you don’t want (to have) overhang,” Ms Thaysen said.

Her next door neighbour’s house, which is built of concrete blocks, had some flooding, roof damage, and a couple of the hurricane windows had blown out.

Ms Thaysen put wood shutters on her regular-pane windows, and installed louvers that could open and close on the inside of her screened-in porch. She put a strap across the middle to keep it secure.

“I can’t guarantee those would have stayed if it (the storm) came from the south with direct winds like that. But by the elevation of the land, I did not get water and that is a God sent,” she said.

The American retiree joked that she also got a “ragging on” the aluminum shingles she put her roof.

“They cost a little more, but these shingles were the ones from the old homes in Key West, and I had to order them out of Houston,” she recalled. “But each panel, each little piece is interlocked with each other, plus you have to screw it down and caulk it.”

She also explained that “by my getting rough cut cypress, because it’s duty free, we had to plane (shape) every piece. But when you get rough cut and if it calls for 2x4, you are getting a straight 2x4 – you’re getting strong lumber. I am so proud of my house.”

The homeowner also took extra steps to ensure that the steel bars were zinc-coated and sealed so that the salt from the seawater would not rust them and cause the concrete column to break away.

Building on columns, according to Ms Thaysen, allowed the water to flow through and not put pressure on the structure.  Another characteristic of cypress, she said, is that it has a tough string-like thickness inside that is dried like a coconut. “When you put a nail in it you can’t get it back out,” she said.

The only disappointment for Ms Thaysen is that her trees and plants, and her stoned walkway to the beach, and the beach itself, were destroyed by Dorian.

Looking at a portrait hanging in her living-room that an artist had painted of her two grandchildren on the beach near her home, she said: “This is how our beach was, and now it is no more. He (Dorian) has taken our beach. It was a big beautiful beach,” she said.

Ms Thaysen said that she and her son are “so fortunate” when many of her neighbours and other homeowners in the East End were severely impacted.

I love this story. Thanks for finding something to talk about that's uplifting and not inflamatory, Tribune!

This is one smart lady. And she was fortunate to have the financial means to build as she did.

DUTY FREE; must have saved a good sum of money. No concrete foundation and no expensive concrete blocks.........maybe cheaper than we think.

The plans and building style for this house should be used as a case study and modeled and reproduced all over Grand Bahama and Abaco. She says she didn't have much money, so it shouldn't be too costly either. The knowledge offered by this house's category 5 resistant construction is a gift from God. Let's use it!

Who would have known that rough cypress was duty free. Most builders is not aware. The Government should implement a website just for builders and owners alike to view before they build since we are building now for a cat 5 . Not only that we need the best materials but the most effective and efficient. Wonderful story.

HER IDEA OF A LOT OF MONEY AND OTHERS MIGHT NOT BE THE SAME. EVER WATCH HGTV... A COUPLE COMES- THE WIFE BAKES COOKIES FOR A LIVING AND THE HUSBAND IS A PART TIME NEWSPAPER WRITER- THEY HAVE 1.2 MILLION TO SPEND ON A HOUSE.

BUT IT IS GREAT THAT SHE WAS ABLE TO BUILD AND KEEP HER HOUSE IN SUCH CATASTROPHIC CONDITIONS.

As a working nurse (not RN) she took eight years to build including fare back and forth to Freeport from Miami.