Victim, 22, Shot Dead Outside His Home 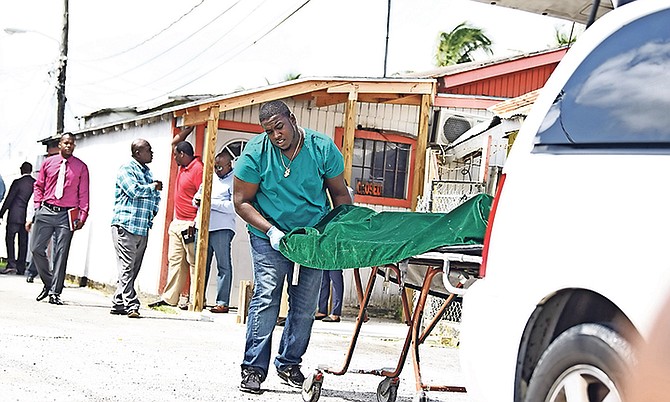 The body is removed from the scene on Tuesday. Photo: Shawn Hanna/Tribune staff

POLICE are investigating the country’s latest homicide after a man was shot in broad daylight sitting near his Wilson Track home yesterday afternoon.

The incident took place shortly after noon at Spence Court off Wilson Track.

According to Superintendent Shanta Knowles, a man was sitting on a log when a small grey vehicle drew up and the occupants, all armed, opened fire in his direction, fatally wounding him before speeding away.

The Tribune understands the deceased is Shawquan Johnson, 22, however, his identity was not released by police. This latest killing pushes the murder count to 82 for the year, according to The Tribune’s records.

Distraught relatives and members of the community flooded the scene, however they did not speak to reporters.

At the scene, Supt Knowles said: “(The victim) appears to be in his early twenties. He was known to the police but of course we will not release his identification until we have officially completed that process. And it is too early to determine (if this incident was gang related). That is as much (information) that we have at this time.

“We are appealing to members of the public, the members of this community Wilson Track, Spence Court, who may have information or who may have seen what may have happened here this afternoon to give us a call so we can take these people into custody and put them before the courts.

“We are pleading with members of the public to give us information that can assist us in solving this matter as quickly as possible.”

When asked if police would identify Wilson Track as a crime hot spot, Supt Knowles said: “I don’t want to say a hot spot.

“I believe that the people in the community may have information on incidents that are brewing. We want to encourage people that know of accidents to let us know so we can intervene and save the lives of our young men. We are committed to working these communities and making them safe for everyone.

“I believe that our communities are still safe, there is some stuff going on that people know and again we are begging them to give us the information so we can make it safe for all of them and save the lives of the young men in our communities.”

“That also speaks to the partnership that we have with members of the community and we want to say thank you to those who understand the importance of partnering with the police and making our communities safe.”