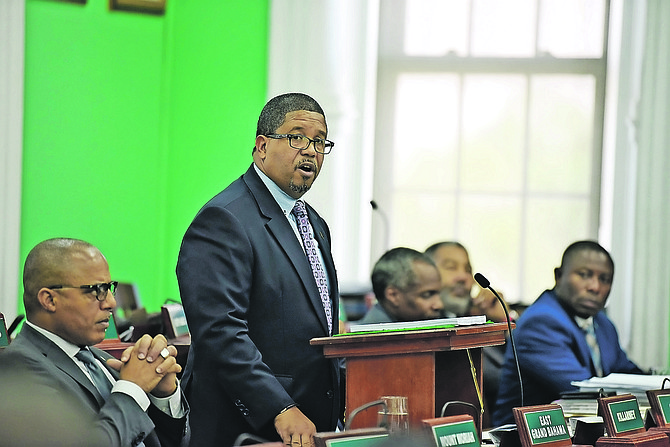 THE deficit for the fiscal year will balloon by more than $430m because of Hurricane Dorian, with the government expecting to spend nearly $230m to recover from the storm while anticipating a revenue hit of about $215m, according to Deputy Prime Minister and Minister of Finance Peter Turnquest.

He stressed in the House of Assembly yesterday evening that his figures are preliminary. He expects a more substantial assessment of the storm’s impact when the United Nation’s Economic Committee for Latin American and the Caribbean (ECLAC) and the Inter-American Development Bank (IDB) completes their full damage and loss assessment of Abaco and Grand Bahama.

The East Grand Bahama MP revealed that the National Emergency Management Agency has received $5.8 million in donations from various private, corporate, foreign government, intergovernmental and non-profit organisations since the storm.

“So far, $1.9 million is being spent on the purchase of recreational vehicles which housed relief workers and volunteers and $2.8 million was spent on the mobilisation of dome structures to provide the mentioned temporary housing for displaced persons,” he said.

He did not say how much the government will borrow, noting that discussions are ongoing over this with leaders of local commercial banks.

The government is using the $12.9 million from the Caribbean Catastrophe Risk Insurance Facility (CCRIF) and will deploy $20 million from the extinguished dormant account funds for disaster recover activities. Mr Turnquest said $10 million of this will be earmarked to help small and medium sized enterprises as part of the $10 million loan guarantee and equity financing programme which will let eligible SMEs secure up to $500,000 in financing.

“When it comes to spending, initial estimates show we will need to spend an additional $222.4 million, with a split of $80.9 million for recurrent spending and $141.5 million for capital,” he said. “These funds will primarily be used for rebuilding critical infrastructure on Abaco and Grand Bahama, including electricity and water serves, the reconstruction of affected medical facilities, the construction of temporary housing and the delivery of targeted government services and assistance to affected populations.”

Five million dollars to fund the new Ministry of Disaster Preparedness, Management and Reconstruction will come from the dormant account funds, he said.

Because the projected $573 million deficit exceeds the $137 million fiscal target identified in the Fiscal Responsibility Act, Mr Turnquest said “the government is required to devise and present a fiscal adjustment plan outlining three components: the reasons for the departure from the fiscal target, the measures the government intends to take to get back on track and an estimate of how long it will take to do it.”

He added: “As required by the act, we intend to provide such a plan to both the Parliament and the Fiscal Responsibility Council in November as part of the upcoming 2019 fiscal strategy report. We will also present a supplementary Hurricane Dorian budget that will outline the adjusted revenue and spending positions, alongside a request for the additional borrowing authorisations.”

Drawing implicit contrasts with the previous administration, Mr Turnquest said the Minnis administration put the government in a better position to respond to hurricanes of the magnitude of Dorian through several measures: by putting in place the “IDB contingent line of credit, the legal provisions to provide access to the use of extinguished dormant account proceeds, the decision to reinstate its insurance cover with the CCRIF and the enhanced revenue measures approved in 2018.”

Although the administration’s fiscal consolidation efforts have taken a hit from the storm, he said “this is not and will not be a licence to return to the days of reckless and feckless fiscal management.”

“This combination of substantially reduced revenue and critically required expenditure will create a substantially different budgetary trajectory over the upcoming budgetary periods,” he said. The Ministry of Finance will work with agencies to implement a ten percent budget cut across government agencies, he said, adding that this will not affect plans related to critical initiatives for Abaco and Grand Bahama.

why don't we just close up shop and call it a day because this isn't making sense.How about increasing all current taxes and public cost ?

Wow! What a bunch of gobbledygook.

1) No mention of significant belt-tightening by cutting recurring government expenditures wherever possible.

2) No mention of amounts needed to protect our southern borders from the ongoing invasion or for a sustained program of rounding up and deporting of the many thousands of illegal Haitian aliens.

3) No mention of the very significant savings our country could achieve on a long-term basis by vigorously and rigorously policing our southern borders and adopting an aggressive sustained program of rounding up and deporting the many thousands of illegal Haitian aliens.

4) No mention of the whopping increases in taxes and fees of every kind coming down the pike which will forever shutter and close the doors of most small and medium size businesses that are already struggling to stay open. [Note that the words tax, taxation and fees are not mentioned once anywhere in the above article. Absolutely laughable - seems Turnquest may finally realize there's no blood that can be had from a stone!]

5) Plenty mention of more willy-nilly borrowing, as if somehow we can borrow our way out the financial hole our corrupt politicians long ago dug for our country, well before the arrival of Dorian.

Turnquest and Minnis have thus far shown they only know how to govern by increasing taxes and fees combined with plenty more unsustainable national debt. But it should now be clear to even them that our country is financially doomed if serious austerity (belt-tightening) measures are not immediately implemented, no matter how politically painful, together with addressing as quickly as possible the very costly burden imposed on our small country and the Bahamian people by the invasion force of many thousands of illegal Haitian aliens.

The government cannot even create a strategy to clear roads, provide security and get food and water to the people who need it most and I should trust these funds will be spent cost effectively? Sounds like a big kitty with plenty hands in it with more government borrowing to me. Some folk are going to have very good Christmas!

Hard times ahead for The Bahamas. My advice: get prepped and bunker down.

This pompous man will be forced to eat humble pie.

So is this Peter Turnquest essentially saying our government can come up with its own estimate of the costs, and so they are to rely upon outside opinion?

In global perceptions, the bad-blood under the bridge factor

All adds up, & the absolutely WORST kind of shyte?

That's always the shyte you slung yourself

While those Gaels of that Black '47 mph be still busy sweeping-up; blowing it all right back onto your face a massief turd pie, smack bang in your face. Come from out of your own bum.

The absolutely WORST thing about national, nationwide, massief outbreak of the 28-Day Rage brought down upon an entire Peoples' Heads by large scale catastrophe

It's the instinctive kicking-in of the Reptilian Brain, or Truine Brain, primordial brain response: fight, or flight.

In situations where mental breakdown throws up all manner of mentally deranged situations, the entire society behaves like overheated nitroglycerin; totally volatile.

Often, an uncontrolled, not-carefully-managed First 28-Days post Mass Shocktrauma Event, can run away and bolt like a young clap of stallions all nervous and fired up.

When that happens, all the old Raggedy Island shower of utterly traumatized Silverbacks and Craggy Auld Biddies will literally disappear out of society with one spark.

When the youth, silent traumatized youths, soon to be tomorrow's men, eventually snap under the never ending armchair shouting their mouths off, d-day and night, week after week, from the same ancient old Testament Lard Ass, fat, grey, half-smashed oldtimers

Those very same people are the LEAST EQUIPPED to put out the kinds of large scale rioting and violence that sweeps through neighbourhoods.

once those silent, wide-eyed, sponge-like brains, finally snap under the sheer weight of hate.

And the HATE'nems entire shtick, is relative, transferable, and always snowballs, ie. that icy snowball, what you throw up upon the mountainside in a moment of anger, ALWAYS returns back down much, much, larger mass of snow.

Cascading back down to earth, totally and completely BURYING YOU UNTIL THE SPRING THAW,

just like a certain irish descendant of your primary tourism dollars bread and butter Big, Globally-Circulated publication landed down atop all of you this morning.

a cupla tonnes of ice, right down aTop Professor Turns of Key quest's big, round, fat, meaty MULLET.

LET THAT SNAP YOU THE &#$@% out of it, Professor Mellonhead, may as well throw another billion onto the fire for good measure.... which you can ad to the millions and millions wasted on horrid Open For Business (no undertakers!) 6 weeks of pure heathen, Juju-Tree pagan inhumanity on Live TV Screens worldwide, like some manner of antichrist diabolical Soap Opera. https://nyti.ms/2peMu20">https://nyti.ms/2peMu20.