DIANE PHILLIPS: When it’s simply a matter of helping our neighbours 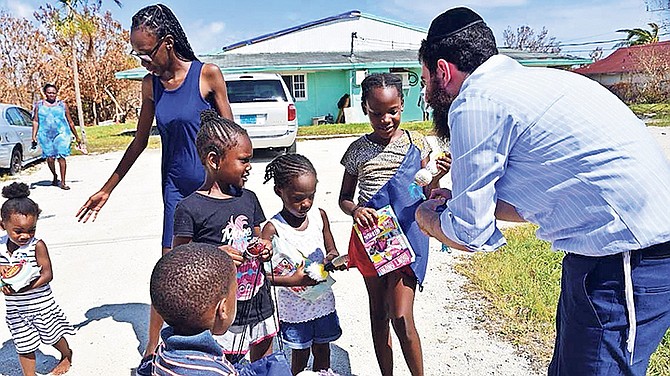 Rabbi Sholom Bluming handing a toy to a child after Hurricane Dorian.

When the Miami Herald ran a front-page story on the aftermath of Hurricane Dorian on September 27, instead of mountains of debris, homes without roofs and lives torn asunder, the image it showed was a bearded man, bent over at the waist, handing a child a toy.

The man was Rabbi Sholom Bluming, a familiar sight among the small Jewish population in The Bahamas for whom he has served as an inspiration and spiritual leader for the past several years. What few outside that population knew until the Herald story ran was how powerful the reach of the Jewish community was in times of crisis, thanks in part to the young rabbi’s leadership and in part to the history of a people who have spent an eternity finding a way to triumph over tragedy. 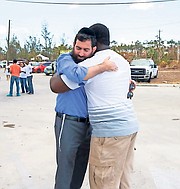 The rabbi does not have a public relations machine to tell the story of all the Jewish community has done or how he personally walked through the rubble in Grand Bahama talking to strangers, shaking hands with the men, hugging when hugging was needed. Many of the people he saw as he tried to figure out the best way to appeared to be in shock.

“I saw so many people whose eyes seemed empty,” he said. “When I walked around the shelters what struck me most was that despite the numbers, the children looked lonely. They were scared, they had lost everything that was familiar to them and they had nothing left.”

He decided to focus on toys and on creating a safe space for young ones to heal.

“I gave a little girl a doll and she turned to her mother and said, ‘Look mommy, it’s just like the doll I left on my bed before the storm took our house away.’ It was heartbreaking,” he said.

The outpouring of support from Jewish communities from South Florida to New York, from overseas and all the way from Israel, was overwhelming, the rabbi said.

“Just today, we had four containers with cleaning materials. We’ve gotten in containers of food, water, hygiene products. Now we are getting building materials.” So many supplies that they’ve had to rent warehouse space. The Israeli government donated a water treatment system. Cash donations continue to pour in.

Throughout the process, the rabbi has worked with 17 churches in Grand Bahama, each serving as a distribution centre for food, water and supplies collected, and the Grand Bahama Disaster Relief Foundation. He praises Rupert Hayward, Henry St. George and others who have risen to the cause with hands-on help day after day even after he returned to Nassau to help his congregation celebrate the most religious holidays of the Jewish calendar year, the week of Rosh Hashana and Yom Kippur.

Before Rabbi Bluming left Grand Bahama, with Jewel Major and Grace Community Church, the slim and wiry rabbi who brought smiles to the faces of children with something so small as a doll or a game made sure the children had a safe space to heal. That is now in Jewel Major’s hands.

“There were a few people outside the religion who asked, ‘How did you get so much for Grand Bahama? There isn’t really a Jewish population there.’ And I explained, it’s not about Jews or non-Jews. These are our neighbours. In times of need, we need to be there for each other. That is the true meaning of love.”

What is it about small cars?

Maybe it’s just me, but then again, others have said the same thing.

Why do small cars think they can barge in, create a third lane on a two-lane straightaway, sneak out and around to run a light or in general terms, act like they own the road?

The only reason I could think of is because they are a lot like small dogs who think they own the place.

They have no fear or at least act like they have no fear of the big dog they growl at, forcing an animal four times their size and easily capable of knocking them for a loop to cower in a corner and hope the moment will pass.

Under the assumption that not all small cars are created alike and some of them are actually polite as well as law-abiding, please accept my apology to those who do not take advantage of small size fits anywhere habits.

And, of course, I realise it is not the car but the driver but some things don’t need stating.

While we are on the subject of traffic, congratulations to those who fought for legislation to forbid texting, talking and other device usage that is not hands-free and for finally allowing us to make left turns on red where appropriate.

Now we need proper signage about where left turns on red are allowed, more info online and elsewhere about penalties for illegal texting and strict enforcement of the new rules.

It didn’t take long for Bahamians who once resisted putting on seat belts to change their ways once they knew the police were getting serious about the law.