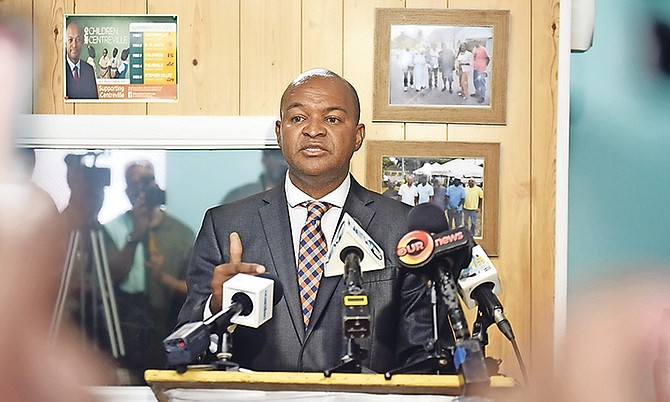 MEMBER of Parliament for Centreville Reece Chipman had been contemplating severing ties with the governing Free National Movement to represent the constituency as an independent since January.

Grappling with what he described as “fake democracy” and “dictatorial cognizance”, the MP’s decision to leave the party came yesterday, ten months later.

The MP told reporters he was further compelled to resign because of partisan politics and the administration’s handling of post-Hurricane Dorian efforts. These issues were what largely solidified his decision to leave the FNM.

Although he could not say exactly how many constituents supported the move, Mr Chipman was adamant this was not the beginning of the end of his career in politics.

At 10am yesterday, Mr Chipman sent letters to the party’s Chairman Carl Culmer and House Speaker Halson Moultrie outlining his grievances, largely based on a “huge disconnect between the Parliament and the people” that he was no longer able to sit back and allow.

He also suggested that the administration’s leadership was “insecure” and did not mesh well with an increasingly educated society.

Mr Chipman beat former Prime Minister Perry Christie in the constituency race during the May 2017 general election. It was a seat held by Mr Christie for more than 40 years.

“It has been since January, once I had left the Public Accounts Committee, the thought process had began and basically giving my party an opportunity to show that the direction they were heading in was in the best interest of the people,” Mr Chipman said when asked by The Tribune how long he had contemplated resigning from the party.

“…It was a big thing for me,” he said, in relation to whether government’s handling of Dorian influenced the decision.

“When Bahamian lives are lost and the way you would have seen lives on the street, definitely there is some accountability that needs to take place from the government. We have a Disaster Preparedness and Response Act that should have been followed.

“The act was in place since 2008. Had we done the annual review and the annual planning from 2008 - I’m not saying we would have saved all of the lives - but at the very least we would have done what we were supposed to do to ensure that lives were not lost.”

However, Mr Chipman never got the chance to share his concerns with Prime Minister Dr Hubert Minnis, suggesting he was ignored.

“At the resignation and at various times I would make calls to have a meeting with him because I really wanted to let him understand because sometimes we look at these things and we don’t understand why we do what we do.

“So I wanted to speak to him with regards to that, but of course I never got an audience with the prime minister and that’s fine.

“The goal is to move forward and maybe at some point we will show him how it’s done.”

The intention, Mr Chipman insisted yesterday, was to show the country that Centreville will flourish without party affiliation.

He maintained yesterday that his family’s unresolved land matters had no bearing on this decision.

“When I campaigned for the FNM it’s so different than what you see now. I am on the ground saying this and saying that just giving talking points, just to get people to vote for persons who are going to go in the House of Assembly and not represent them.

“I didn’t understand that at that time because I was only on the ground, having been in the house of Parliament and seeing the impact of partisan politics on our people, you’re passing laws that are hurting your brothers and sisters, and for what? A couple of dollars?

“Well Centreville will show that we don’t need your money. We will make it happen and as an independent I will work with my private companies and my private persons to make sure that this community stays alive.”

“This decision came with lots of conversations ad lots of communication with those with a stake in my political direction, and the political direction of our country – my God, my family, and friends and last but not least my constituents,” he said in a separate letter to Speaker Moultrie.

“Institutional or partisan politics at this time will not work for the constituency of Centreville or myself as its representative. The deepening of democracy of the parties and of this parliament can only be the fragment of one’s imagination. But I hope that changes.

“…I am not prepared to sit back and watch a Parliament not follow the very laws they enact, but yet dream of a lawful society and a lawful culture.

“I continue to be baffled by the fact that the people would have presented two petitions to the House of Assembly that went unanswered (and) a ruling of the House with regards to the PAC that has yet to be fortified.

“Standard committees of the House that go without report to the House or the people (and) bills being passed without accompanying regulations and lack of policy. (There has been) no question time as the rule book indicates.

“This is yet another signal to the next generation to fix the Parliament by ensuring a real democratic process in the selection of their representatives.”

The now independent representative also asked Speaker Moultrie to reseat him according to parliamentary rules. He also wants permission to address his colleagues for five minutes at the next sitting of Parliament.

The FNM released a statement yesterday morning calling the decision “unfortunate”. The party seemed to attempt to get ahead of the bad publicity that resignations bring.

“Mr Chipman won a historic election in May 2017, defeating the sitting Prime Minister and then Centreville MP Perry Christie,” the statement said.

“It is unfortunate that Mr Chipman decided to leave our party. The FNM is a place where young Bahamians can make their contributions to nation building. The FNM has the oldest youth political organisation in the country in the Torchbearers Youth Association. The FNM elected the youngest members to Parliament at the last general election.

“Since coming to office, this Free National Movement administration led by Dr Minnis has been committed to addressing the major problems facing The Bahamas. During the FNM’s term the economy has returned to regular growth, crime has decreased and accountability has returned to Government after years of corrupt Progressive Liberal Party rule.”

The FNM thanked him for his service and wished him the best.

Mr Chipman’s political career, although short, has been a storied one.

In March 2018, he was fired as chairman of the Antiquities Monuments and Museums Corporation after defying Dr Minnis’ ultimatum to either tender his resignation or be fired.

The firing came a mere ten months into the Minnis administration’s term in office.

Asked yesterday to reveal what really led to his firing, Mr Chipman said: “I was fired form the Antiquities Monuments Museums Corporation and based on the information I would have received from the individual that fired me, he said I was not getting along with the people. I can only give you what I was told why I was fired.”

In June 2018, he along with Golden Isles MP Vaughn Miller, Pineridge MP Frederick McAlpine and Bain and Grants Town MP Travis Robinson voted against the value added tax increase from 7.5 percent to 12 percent.

And then in January, he resigned from the Public Accounts Committee out of frustration with the immobility of the traditionally powerful parliamentary sub-committee.

Mr Chipman also released a press statement yesterday, saying if he knew then what he knows and is experiencing now, he would have fought even harder for the people of Centreville.

“…There is a difference when institutions build themselves on fake democracy, only to be reigned in with the practise of dictatorial cognizance,” Mr Chipman said.

It is time the Bahamian people wise up and stop using their emotions to choose leaders. Just because a person can secure a nomination and eventually become a party leader DOES NOT mean that person is qualified to lead this country. We have too many incompetent undisciplined people who lack critical thinking skills offering themselves for higher office in this country.

I hope others soon join him in leaving the party because Minnis may be Prime Minister, but he is certainly NOT a leader!

HOW DO WE DETERMINED A TRUE LEADER? ANOTHER QUESTION...IS THE LEADERS FROM DNA PARTY AND PLP PARTY TRUE LEADERS?

YOU ARE GIVING US WHAT WE MUST NOT DO, BUT YOU ARE NOT SHOWING US HOW TO SELECT A TRUE LEADER...I WANT TO KNOW.

@ xtreme2x ... a self made person (not affiliated with formerly illegal activities) with commonsense who has a stable family and knows how to get things done while not towing the party line, is a nationalist and is God fearing, is a good place to start

This is a big breath of fresh air for the voting populace of The Bahamas. It is very much welcomed!

When we return to this form of political culture, the economic interest of the few, and minority, won't supersede the interest of the People of The Bahamas. Welcomed action on the part of Centreville.

He only beat Perry by about 7 votes, Brave ga take da one in the next election.

The rank and file Abaco's and Grand Bahamaland's comrade red shirts pre hurricane supporters know firsthand that the negative stories about colony's prime minster and certain top substantive cabinet ministers, stumbling are far from being false because they have had a real and lasting effect on their lives, yes, no .... This is not just political enemies spreading made up falsehoods .... Too many colony's out islanders have not only lost most, if not all, what they had, but also cost could cause long-term damage avenues to earn a living - going forward ....

It is time to abandon MPs being elected for parties based on first past the post ....... They should be allotted by total party votes ............ Then we won't see all of these lop-sided party wins. If a party gets a minimum of 5% of the total votes, it should get a seat in Parliament.

Little dang crybaby. What's wrong, boo......hurricane getting all the attention?

@ Reece Chipman, I applaud you for following your conscience. Sometimes in doing so, we end up on the narrow, lonely road. You have to live with yourself and no one else. I wish you the best.

It's unfortunate that you left the party, but it will move on. The way politics is in our country, unless there is a shift in the mindset of our people, there will always only be 2 parties. You are either PLP or FNM. There is little room for anything else in between. I think that you may have hurt yourself politically, but only time will tell.

Don't forget Donald Trump left the Republican party and went into the elections almost alone. Now the Republicans are trying to rejoin Donald trump for the 2022 Elections. No democratic candidate seems able to stand up to Trump so they have decided to go the route of impeachment. Reece Chipman is young. Maybe front line politics is not for him. Maybe he needs to be another Branville McCartney, Tennyson Wells (RIP), Hubert Ingraham, perry christie or many others who resigned from their party at some point or two. And hey it makes the five-year cycle more exciting.

What a young inexperienced Fool, he just committed political Suicide! It's over for him!

We need two " All Bahamian Partys'" made up of people with no Haitian heritage!

So many similarities between Chipman, Rollins, McCartney, etc. Its the way it should be and the,way it is. Knowing the difference can avoid a lot of wasted time..