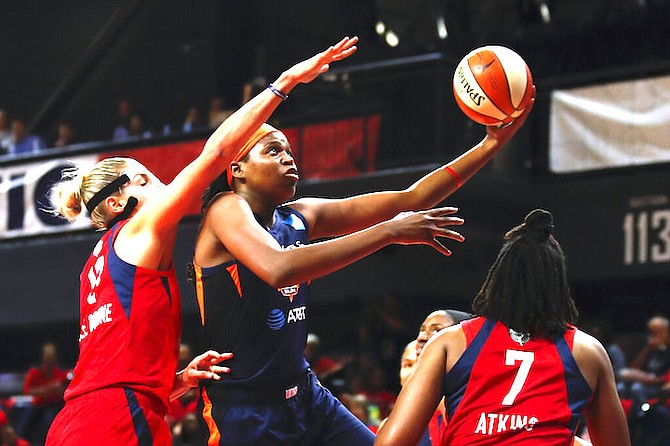 In a WNBA Finals series where no team won consecutive games, Jonquel Jones and the Connecticut Sun came up just short in their bid to make franchise history.

Jones finished with 25 points and nine rebounds, but the Sun fell to the Washington Mystics in the fifth and deciding game of the series, 89-78 last night at the Entertainment and Sports Arena in Washington, DC.

The Sun held a nine-point lead near the six-minute mark in the third quarter when Jones picked up her fourth foul and was forced to the bench.

Washington immediately responded with a 13-2 run to take control.

There were nine lead changes and 15 ties as the two teams battled back and forth until the final few minutes of the fourth quarter when the Mystics pulled away for the win.

Jones averaged 19.2 points and 11 rebounds per game in the series and posted double doubles in both wins for the Sun.

The Mystics won game one 95-86 when Jones finished with just 12 points and six rebounds.

The Sun rebounded in game two behind Jones’ historic 32 points and 18 rebounds in a 99-87 win.

The series returned to Connecticut for game three and the Mystics got the win 94-81. Jones finished with nine points and nine rebounds.

Despite the finish, it was a season of accolades for the Connecticut Sun Star and Grand Bahama native.

Jones led the league in rebounds with 9.7 boards and blocked shots at a career high 2.0 per game.

She also finished fourth in defensive rebounds with 6.4 per game. This season, Jones grabbed 10 or more rebounds 16 times, including a season high 22 rebounds on May 31.

She finished the regular season with starts in all 34 appearances, averaged 14.6 points and posted career highs in steals (1.5 per game) and minutes played (28.8 per game). She also won her second rebounding title in four seasons.

Jones was named to the All-WNBA Second Team, the WNBA All-Defensive Team for the first time, finished third in Defensive Player of the Year voting, was a WNBA All-Star and was named Eastern Conference Player of the Week four times. Connecticut finished 23-11 in the regular season and was ranked No.2 in the playoff bracket, second behind the Mystics who finished 23-8.