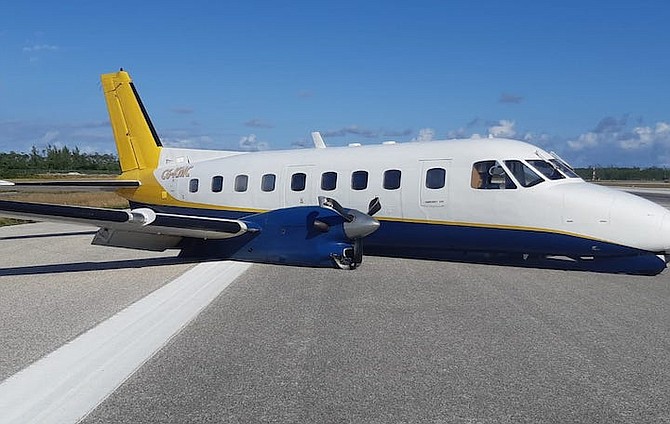 The plane lies on the runway at LPIA. 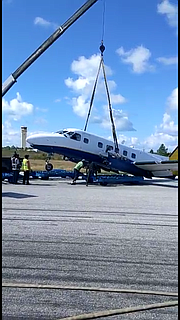 "The Air Accident Investigation Department is actively investigating an occurrence that took place this morning at LPIA involving Pineapple Air Aircraft with registration C6-KMC," the department said in a statement. "The aircraft with 11 souls on board had its landing gear collapse (9.06am) after landing on runway 14 at LPIA. The aircraft received damage, there were no associated injuries reported.”

"It has only had one incident which was involving an Embraer 110 Bandeirante in which the aircraft had a landing gear collapse at 8:00 pm Jan 9th 2018 at an airport in Eleuthera only one passenger had minor injuries and the plane sustained only minor damages"

Come on Bahamas! Inspect these small carriers properly please or ask the USA to help! what was the takeoff weight, duration of flight etc? What are the number of incidents for this carrier per passenger mile?

While we are all grateful that no lives were lost, this has been a long time coming. If you were to ride these smaller airlines to Eleuthera you would have a better understanding of how ill maintained these airplanes are. The last time on this carrier, the plane felt as if it did not want to ascend and was struggling. Atleast they have fixed the constant smell of fuel that this airline usually has. The rattling is so unbelievable that even with headphones turned all the way up, you cannot hear what you are listening to. This company makes anywhere from 3 to 5 trips to North Eleuthera a day and that can increase depending on special occasions. Hopefully this will cause changes.

It better change or it will follow the path of Captain Randy Butler and Sky Bahamas. We must make safety a priority for our domestic carriers.

Was Randy Butler planes in as bad shape as Pineapple & Southern Air???

Last words of pilot immediately before landing might have been: "Oh my God, I forgot to put the landing gear down!"

These planes need to be retired and new ones purchased. We fly Nassau to Eleuthera frequently and the rattling, noise and smell of gas is terrible. Last week the seat belt I had was jammed and could not be used, this would have not done me any good in a situation. Given these planes are in the air almost all day between the islands, I very much doubt any safety check or maintenance is done. We will be switching airlines until Pineapple makes some serious changes.

I believe that's on the checklist

Highly unusual and quite suspect for an aircraft’s main and nose gear to all collapse. Was the ggear lowered prior to landing? Checklist completed?