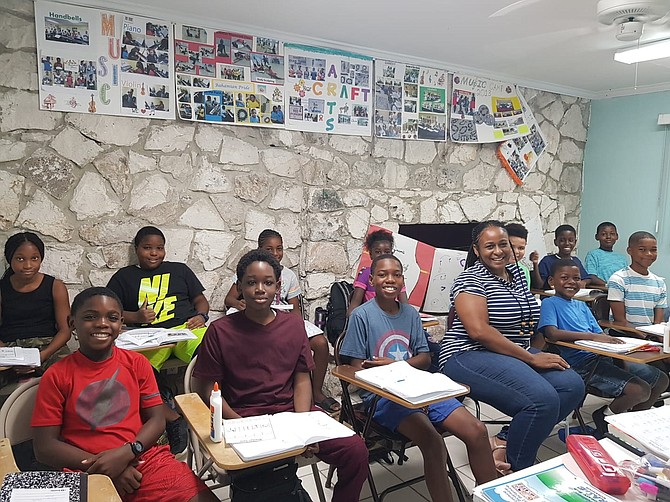 GB Teacher Autumn Wildgoose of Hugh Campbell Primary holds classes for her students at the Allegra School of Music after the school was severely damaged during Hurricane Dorian.

Grand Bahama school teacher Autumn Joi Wildgoose is the perfect example of a dedicated educator. In the aftermath of Hurricane Dorian she took it upon herself to hold off-campus classes for her students who are unable to attend school because of severe flood damage at the Hugh Campbell Primary in Freeport.

Not wasting any time, Ms Wildgoose was able to secure a space at the Allegra School of Music on East Sunrise Highway where she is currently teaching 12 sixth graders who are preparing to sit the GLATs this year.

“Our school was completely underwater and so we lost everything,” she told The Tribune.

Hugh Campbell, which is located on Settler’s Way, sustained over five feet of flooding in all 30 of its classrooms and in the administrative office. It is among a number of public schools that are temporarily closed due to hurricane damage.

Although repairs and restoration efforts are underway, Ms Wildgoose said it is not known when the school will be ready to resume classes.

“Like everywhere on Grand Bahama, we are going through a crisis right now, and it is unpredictable about when things will get back up and running. This is my first year teaching sixth grade and I am kind of nervous about it as well, and the children have GLATs,” she said.

Ms Wildgoose teaches a special group of students between the ages of 10 to 11, and wanted to give them a head start on the curriculum before returning to school.

“I teach a mixed group inclusion. I have children with autism and students who are average, and because I move at a different pace and I do things differently, I thought it was best for me to try find some way to start working with the kids ahead of time so we can have an advantage,” she said.

She currently has 12 students and is expecting two more. The classes are free and she has been getting requests to take on other students who are not from Hugh Campbell.

According to Ms Wildgoose, many of the students were happy about returning to the classroom.

“On the first day we had a discussion about the storm and what happened, and we had one or two students who had some water in their house. But they are all very excited to come back to meet friends and do some class work because they were off since June - that’s about four months," she said.

Teaching was something Ms Wildgoose also always wanted to do. She said she loves teaching and working with kids.

“When I came out of high school I knew exactly what I wanted to do, so I went into education and did my Bachelors at COB then, and in 2015 I graduated with a Masters in Exceptional Student Education,” she said.

Ms Wildgoose noted that after the storm she could not find a space to start classes because so many places had been compromised.

“I assisted at the Allegra School of Music in the afternoon and so I realized that no one was there in the mornings, so I asked the owner of the establishment permission to use it, and she said it was OK. It is free and I don’t charge the kids anything,” she said.

Ms Wildgoose said the arrangement is working out well for students and parents. “I know (other teachers) do not have the opportunity to as I did in terms of finding a space because a lot of places were underwater. This opportunity was here for me, and it was like it was meant to be,” she said.

The parents are grateful to Ms Wildgoose for starting classes even though the school remains closed for the he time being.

Parent Shenika Wells said she was very happy that Ms Wildgoose took it upon herself to find a location to hold classes.

“It is great that she did this when nobody else was open. I am happy with her because the students have been off so long and to have them back in classes is a blessing," she said.

Somehow Comrade Minister Jeff, must have had up in he mind, FREE port's school teacher Autumn Joi Wildgoose, the dedicated educator who immediately after the aftermath of Hurricane Dorian, took it upon herself to hold off-campus classes for her students who are unable to attend school because of severe flood damage at the Hugh Campbell Primary in FREE port - when he as minister education said that, .... No no child in colony of Out Islands should be at risk of dropping out of school because of Dorian. As a colony, we will not let this happen. Our paramount concern is to make sure all students are back to school as soon as possible. After the devastating impact left by Hurricane Dorian, education is our best investment and a cornerstone of the whole reconstruction process. Dorian may have put us on our knees, but education will bring us back on our feet."
Now minister Jeff can add that FREE port's school teacher Comrade Autumn Joi Wildgoose, who got up off her knees is education's best investment and a cornerstone of the whole post Hurricane Dorian reconstruction process. Amen!

Young lady, you are a breath of fresh air! This type of dedication to the teaching profession has not been seen in over 30 years. Thank you so much for going the extra mile! These young lives will be better for it. May you experience continued success in your career.

What a wonderful lady

I love this story!!! Fills a need for uplifting, positive news!

This is a good PSA for teachers ......... However, the majority of (public school) teachers are now under the Union spell and are waiting for things to return to pre-Dorian normalcy or they are sitting at home waiting for their letters and relocation money ........ This kind of teacher may be one in a hundred out there.

Indeed!!! This young lady is an asset to teaching profession. God bless you and continue to shine, wherever, you are. God bless you!!!

Indeed!!! This young lady is an asset to the teaching profession. God bless you and continue to shine, wherever, you are. God bless you!!!