Face To Face: Charlene’S Lifelong Ambition Realised In Decades Of Helping Others

I had the opportunity recently to visit Dr Charlene Wallace’s Palmdale office and see her in action. She was busy advising patients, young and old, conducting eye examinations, and helping them choose the perfect pair of glasses to suit their face. She did it all with a glowing smile and an obvious dedication to her craft. When I learned she was the first Bahamian female Optometrist to return to The Bahamas and be engaged at the Ministry of Health, I understood the level of seemingly boundless energy she has. She is a trailblazer and she has set a good path for others to follow based on determination, commitment and zeal. 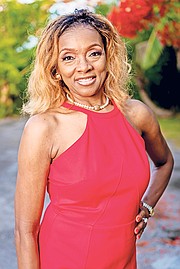 A part of the good foundation that made Charlene a pioneer doctor was laid at St Augustine’s College. A proud SACer, Charlene shone at the school because she was confident, goal-oriented and focused. She and I share the common history of having served at SAC as student council president, which is equivalent to the position of head girl or boy.

We both served on the student council for all six of the years we spent there attending high school. It was evident to administrators, teachers and her peers, that Charlene was a leader in the making. She was a member of the track and field, basketball and softball teams and in spite of her athletic agenda, she still found a way to be a part of the fine arts and performing arts programmes. She was a member of artistic teams that painted murals, some of which today enhance facilities such as the Princess Margaret Hospital. She was the recipient of the inaugural and prestigious SAC principal’s award at the school’s 1980 graduation exercises. She has been selected as an honouree for the school’s alumni 2019 Lighthouse Awards and Gala on October 26 at the British Colonial Hilton hotel.

Charlene’s success from an early age is possible because of the sacrifices made by her parents, Charles and Angela Wallace. She is the eldest of three children and she grew up on Bar 20 Corner just off of Kemp Road, where she spent the majority of her childhood years. She and her siblings Kayla and Carvill enjoyed long days in classic Bahamian childhood fashion – spinning top, shooting marbles, climbing trees and playing ring play. Back then, children walked to and from school, something she did from an early age to her classes at Woodes Rodgers Primary.

The Wallace children benefited from the love of extended family and neighbours. In those days, neighbours were like family – an attribute often missing in Bahamian society today.

Dr Wallace and her daughter, Cymphony.

Her family’s matriarch, Addie McCartney (nee Allen) was a tremendous influence in Charlene’s life. Addie and Alfred McCartney had six children, including Charlene’s mother, and she made sure all of her children and grandchildren stuck close together. Most people who know the McCartneys can attest to this, including myself, who benefitted from the love and closeness they shared during my childhood years.

“My grandmother always saw to it that we got together as a family,” Charlene said.

“Every Sunday, we would attend afternoon Sunday School at East Street Gospel Chapel. After Sunday School, we would go to my grandmother’s house. All of her grandchildren came together there. Prayer was important to her. She prayed for us and she called each grandchild by name.”

Charlene had a strong spiritual background not only through her grandmother’s example of prayer, but through her parents’ dedication and commitment to God and the church. Her father was a leader at Grace Gospel Chapel and directed the church choir and the Gospel Bells for many years. Her mother was a manager at Star Insurance and was one of the oldest-serving members of the company. She was also a beautician by trade. Together, her parents represented a strong foundation in her life and today, in their eighties, they are still her “strong tower”.

“Growing up was a wonderful time,” Charlene recalls. 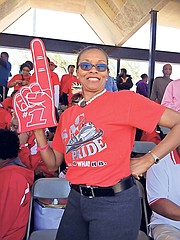 Dr Wallace cheering for St Augustine’s at a sporting event.

“From as far back as I can remember, I have always wanted to be a doctor. There was nothing else that I ever aspired to be. I always wanted to help others and make a positive contribution to their lives.”

Her parents always invested in her life and by the time

Charlene graduated from SAC, her educational pathway was planned so that she could properly prepare for her lifelong assignment. She earned an Associate’s degree in Biology from the College of The Bahamas (1982), a Baccalaureate in Biology from Canada’s Concordia University (1985), and her Optometric credentials from the New England College of Optometry, Boston Massachusetts (1989).

Her decision to choose optometry didn’t come until she was in pursuit of her undergraduate degree in biology: “In my anatomy class, one section placed special emphasis on the eye. We conducted numerous tests and various dissections… it was absolutely intriguing to me.”

Initially, she worked out of the office of Dr Johnathan Rodgers. By September 6, 1990, Charlene established her own practice – Family Eye Care Centre. The clinic was opened in Centreville but is currently located in Palmdale at the corner of Rosetta and Alexander Streets – both near her ‘stomping ground’. With a vision of extending services to the Family Islands, Charlene took Family Eye Care first to Eleuthera, the island of her family heritage. Fond memories of days spent with her maternal grandmother on Eleuthera led her to offer service to the island by May of 1992 – less than two years after first opening her doors. Over the last 29 years, she has provided eye care services not only in Nassau, but also in Governor’s Harbour,Harbour Island and in Treasure Cay.

“Optometry could be looked at as one of my God-given assignments in my life,” she said.

“It was never in my plan (to be a pioneer in medicine in The Bahamas). I never even thought of it that way. I was just walking in the path God had for my life. I just wanted to return home be a productive citizen, make a contribution and make sure that people have the best possible eye care and have healthy vision. It was amazing how destiny aligned.”

I asked her what she could say to young people who may aspire to become a doctor, she gave this advice: “You can be anything you want to be if you work hard at it. You don’t have to come from any special area of the country. I came from Bar 20 Corner. It was not a pathway laid out for me. I had to work hard for it (my success). I was at COB and during my first year, I was told that I had been granted a scholarship by a private foundation. They gave me verbal confirmation but when the final list came out, my name was not there. That was devastating. But I was determined and I reapplied the following year and to several other companies. I was not only granted one scholarship but two. That is what assisted me at COB and when I was able to go off to Canada to complete my undergraduate degree.”

Of all her accomplishments, motherhood and parenting of her daughter, Cymphony Carmel, is one of her most cherished roles. The love and joys of raising her daughter, inspires and propels Charlene to seek new heights and strive to accomplish even greater goals. She cherishes her nieces and nephews dearly, and is proud that she was able to serve as inspiration to her niece Ge’Anne, who is currently in her final year of medical school.

“I always felt that my life’s assignment was one of making a contribution to the lives of others,” she said, “and if I could assist others along the way, then my living would not be in vain and worth it all.”