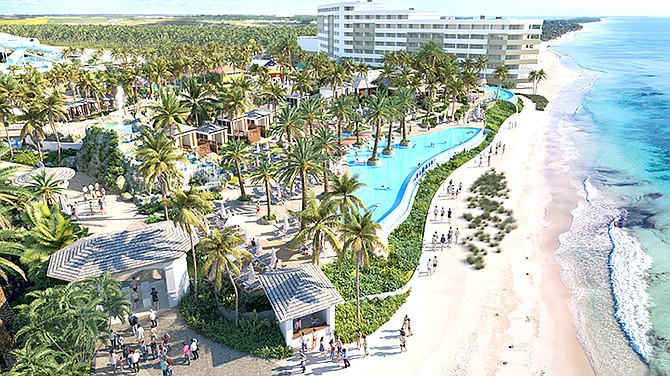 With the expansion on the former Wyndham property likely to be interpreted as an indication of Baha Mar’s confidence in The Bahamas and its tourism product post-Dorian, Mr Davis voiced optimism over the property’s prospects for late 2019 and the peak 2020 winter season.

Speaking during a a press conference at the Cabinet Office, Mr Davis said Dorian’s impact “has been more temporary than permanent. We have, during the months of September and October, seen a fall-off of bookings - certainly down from the prior year,” he added.

“I would say that we are in the neighbourhood, between rooms and food and beverage, at about a $10m fall, but as far as the long-term outlook we are now starting to see that gap close between prior year bookings.”

“We are confident and optimistic that as we get to the end of the hurricane season this will be a past memory in the traveller’s mind, and they will understand that The Bahamas is open for business and so is Baha Mar and other lodging establishments here in New Providence. So we are very optimistic that we will have a bright season ahead throughout 2020.”

Mr Davis said Baha Mar has already hired a Bahamian company to do the pool construction for its water park, estimating that about 80 percent of the workers on-site are Bahamian. Other contracts have yet to be awarded.

The long-awaited water park and entertainment facility, known as Baha Bay and the central element to Baha Mar’s Phase II expansion, is projected to create some 500 permanent and direct jobs, and 1,000 indirect jobs.

It will be located between the SLS Lux and Melia hotels on the 14-acre site that previously housed the now-demolished Wyndham resort and Crystal Palace casino, and is scheduled to be completed in the next 12 to 24 months.

Dionisio D’Aguilar, minister of tourism and aviation, told Tribune Business that the impact of Baha Mar’s $300m investment was “enormous” for the Bahamian economy and tourism product - especially given its timing just weeks after Hurricane Dorian’s passage.

Revealing that he had been “very anxious” for all approvals to be granted, and construction to proceed, Mr D’Aguilar said the 500 permanent jobs being created will inject $12.5m in new wages annually into the economy based on an average $25,000 salary.

“It’s increasing the employment levels at Baha Mar by 10 percent, so yes, it’s very significant,” he told this newspaper. “You have all the goods and services, and utilities and imports and VAT as well from this. I was very anxious for it to get concluded, and I’m glad we’ve reached that point.

“We have a lot of people in New Providence from the affected islands, and it will take time for them to find employment and get back up and running. This will help to ease that pain somewhat. It’s an immediate boost to employment levels which will help to negate the negative impact of the storm on the economy.”

Mr D’Aguilar, who was a Baha Mar Board director under original developer Sarkis Izmirlian, and vehemently opposed the process that led to the acquisition by current owner, Chow Tai Fook Enterprises (CTFE), said water parks were becoming a ‘must have’ feature for mega resort properties such as the Cable Beach development.

While its development may further narrow product differentiation between itself and Atlantis, the minister added that a “most attractive” feature of Baha Mar’s development was its intention to make the water park open and accessible to Bahamians.

“I think that Baha Mar realised, certainly when they completed construction of their property, that they needed to add water activities,” Mr D’Aguilar added. “This helps to accomplish that, and they’re going to open it to the public. It will give Bahamians, which I find most attractive, the ability to visit a water park in their own country.

“It continues to add to the inventory of product that’d available in Nassau, and water parks seem to be the in thing. People look for water-based activities, especially in tropical settings like The Bahamas. It will help drive additional business to The Bahamas, and that translates into more revenue for the country in more ways than one.”

Mr D’Aguilar added that Baha Mar’s investment would further strengthen The Bahamas’ ability to “bounce back” from the “setback” inflicted by Hurricane Dorian, and said: “We’re down but not out, and are offering new product in parts of the economy unaffected by Dorian.”

Mr Davis, meanwhile, said construction works related to the expansion will not impact Baha Mar’s other amenities or attractions. He added: “We are working on some pool areas in advance in the very front area of the beach, so we can get that tidied up for the upcoming season. So we can have two pools and a restaurant opening up for the season of 2020.

“These works won’t have any impact on the day-to-day operations, and we are very fortunate that this 14 acres of land was right where the Crystal Palace Hotel was demolished. So this is a clean site between the hotels and it is not affecting the experiences.”

Upgrades will also take place to the Melia hotel including mechanical, electrical and plumbing, as well as to the kitchen, convention and meeting spaces. And Baha Mar’s existing pier will be expanded to better allow for boats to more safely dock at the resort.