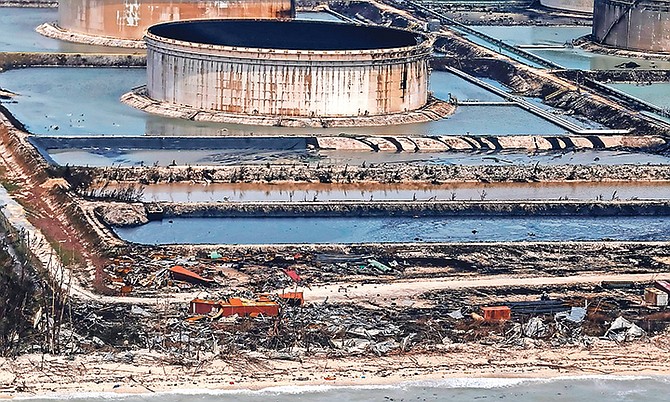 Oil in the area of the Equinor facility after the oil spill during Hurricane Dorian.

To date, more than 35,000 barrels of oil have been recovered from the site. Speaking in the House of Assembly, Mr Ferreira said four thousand acres of forest have been surveyed and 175 acres have been confirmed as affected in some way by crude oil.

"The final determination was 119,000 barrels of oil that was spilled during the passage of Hurricane Dorian. Everybody is aware the roof of the storage tanks blew off. Between wind, rain and tidal surge, oil spread out into the forest to the north and to the containment areas."

As parliamentarians debated an amendment to the Disaster Preparedness and Response Act, Mr Ferreira said the bill is a part of the government's response to climate change.

"It would essentially be unconscionable (to allow persons to rebuild in) no build zones," he said.

He added: "It would also be unconscionable for us not to make the necessary legislative changes to allow the government to take action where need be to protect people from themselves. In the face of all of this, my ministry is doing its part."

Meanwhile, environment watchdog groups said the oil spill has contaminated water in critical wetland habitats, including an area more than one mile away from the spill. This is according to Waterkeepers Bahamas, Save the Bays, and Waterkeeper Alliance.

The groups noted in a joint statement that they tested water samples at five locations near the Equinor spill site and sent 54 individual water samples to an environmental chemist to a certified water testing lab in Wilmington, NC.

Waterkeeper Alliance field investigator Christian Breen said the results are well beyond what would be naturally occurring. The sample profile is distinct and consistent with the makeup of heavy-grade fuel oil, which is not supposed to be there, he noted.

The press statement read: "The affected wetlands provide a vital ocean buffer for Grand Bahama, as well as habitat for migratory birds, such as the West Indian woodpecker and red-legged thrush. The wetland also provides a critical cleansing mechanism for the island's scarce groundwater.

"...Save the Bays and Waterkeeper Alliance determined during a post-storm site visit that the spill thoroughly polluted the ground of at least a four-square-mile area that includes wetlands, pine forests, and mangroves."

Save the Bays Chairman Joseph Darville said the group recently witnessed dozens of workers cleaning up the massive amount of oil at the spill site.

Mr Darville said: "There were trucks vacuuming the oil and pumping it into tank trucks. We witnessed workers knee-deep in oil. Not only are these conditions unsafe for workers, but the haphazard and superficial clean-up we witnessed will not be adequate to protect the sensitive pine forest and wetlands threatened by this spill."

Pete Nichols, Waterkeeper Alliance organising director, said as Equinor is a Norwegian company, this spill should be cleaned up to at least Norwegian standards. He added that Equinor CEO Eldar Sætre should ensure that the site is left as clean as it would be had this spill taken place behind his home in Norway.

The statement added: "The environmental groups call for a comprehensive impact study to quantify the impact of the spill, to properly identify all impacted areas, and to guide remediation efforts. Equinor agreed on Tuesday to planned monthly visits to the site from Save the Bays. The company also gave Save the Bays and Waterkeeper Bahamas a tour of the facility and impacted area earlier this month."

The dome-shaped lids of two storage tanks - numbers six and ten - at the facility were blown off, and oil was dispersed in the area as Hurricane Dorian unleashed 185mph winds and pummeled Grand Bahama for about 40 hours.

The one goat and three birds must have had compromised immune systems. All others survived.

Isn't it ridiculous they want more oil facilities there?

It was just one goat - and man he was dead thirsty.

So half the size of the ExxonValdez oil spill... Which was environmental disaster of global proportions. SMH

You folks need to take it easy, Nassau doesn't have any and yet they have a nasty spill as we speak, BPL. That spill was caused by a major hurricane lest we forget. BPL.. well ...

He added: "It would also be unconscionable for us not to make the necessary legislative changes to allow the government to take action where need be to protect people from themselves. In the face of all of this, my ministry is doing its part." Protecting people from themselves? Is Romi serious? Is this what a democracy does? Defend to the bitter end a companies rights to pollute our home. Profits before people and our country? And then, remain silent on more oil facilities in this country. Remain silent on drilling for oil? Do we not see that we have a critical problem in this country? Have we lost our entire ability to think straight? Don't we want to know what caused this descent into ignorance? Was it our piss poor educational standards alone? Was it Rubis oil in the water supply? What exactly is it that has allowed the brains God gave us to wither and die on the vine? After the lies that were fed to us on the amount of this spill, how much truth does anyone think is coming from Equinor or the Bahamian government?

Why did they fill those tanks just prior to the arrival of the hurricane?

They didn't, full tanks are the norm after the oil prices crashed 5 years ago. Very little movement now, you'll hardly see a ship at Stat Oil or Borco now...

No one in the oil industry, especially the oil storage and transhipment business, talks about the volume of oil in terms of gallons as opposed to barrels. A standard barrel contains 42 gallons of crude oil. There could be only one reason for Equinor/Statoil and its representatives choosing to frequently refer to gallons rather than barrels and that's to create the impression they have acknowleged a large spill when in fact the actual spill was very much larger. Five million (5,000,000) gallons naturally sounds like a lot more than 119,000 barrels but that figure of 119,000 is likely greatly understated simply because monetary damages for such major oil spills is usually assessed based on the number of barrels spilled into the environment.

By Equinor/Statoil's own admission, the storage tanks at the facility were holding 1.8 million barrels of oil at the time of Dorian's arrival. Aerial photos and aerial video taken of the facility in the immediate aftermath of Dorian and posted all over social media clearly show that many of the tanks were severely breached (several had their dome tops completely blown off and away) and that a large amount of oil had spilled into the surrounding areas and possibly into the sea. The tanks were left holding nowhere near a total of 1.8 million barrels of oil which means most of it spilled into the surrounding environment and likely the sea as well. Some of the tanks which had been full were quite visibly left nearly empty after Dorian passed. To say only 119,000 barrels spilled into the environment strains credibility to say the least.

Obviously there was a failure to ensure the storage tanks could withstand sustained wind forces from a category 5+ major hurricane even though it has been well known for more than two decades now that such hurricanes have been whizzing about our area of the world with ever increasing frequency, intensity and severity. Equinor/Statoil must be made to bear full responsibilty for this environmental disaster. They must be held not only fully accountable for the cleanup effort, but also for all long term damages to the environment, wild life and health of Bahamians in the area by way of an appropriate financial settlement. At the moment there seems to be every indication that a 'cover up investigation' is well underway with our corrupt government's blessing.

Keep in mind that our mangroves and marshes tend to have higher Environmental Sensitivity Index (ESI) rankings due to the potentially long-lasting and damaging effects of both the oil contamination and cleanup actions. Also, our more permeable (porous) limestone substrates have a higher ESI ranking due to the slower speed at which natural processes will remove the oil. The damage has been done and we have a right to be compensated for having to live with its effects for years to come. We also have a right to receive assurances that steps will be taken to ensure the same thing does not happen when the next major hurricane visits the storage facility.

And why haven't The Tribune's investigative reporters made any serious inquiries into what our government has learned about the type and extent of insurance coverage Equinor/Statoil had in place for such a hurricane caused major oil spill occurring at their Grand Bahama storage facility???!!!