Staying To Rebuild Amid The Rubble 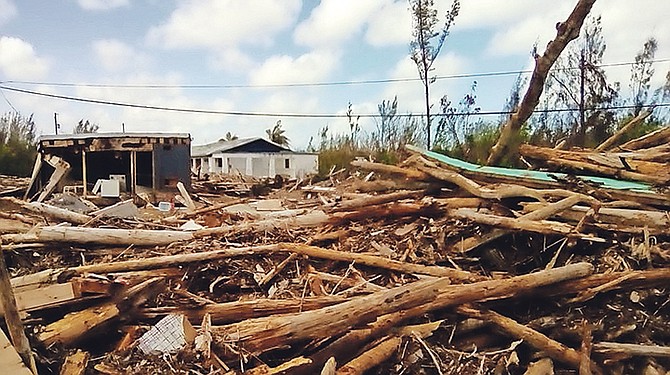 QUEEN’S Cove has flooded many times, but residents say the flooding they saw in their homes from Hurricane Dorian surpassed all other previous storms on Grand Bahama.

It is one of the most vulnerable water-front communities because it is situated off Grand Bahama’s north shore, and to the west of it is Hawksbill Creek.

When The Tribune visited Queen’s Cove yesterday, this newspaper met only three homeowners. There is no power and the community is littered with massive debris. Homes are torn apart, gutted and destroyed by the storm surge.

Yet, the homeowners this newspaper spoke with said they are not relocating from where they have lived for decades and are determined to rebuild their homes.

Richard Little, who resides on Queen’s Boulevard, said of all the hurricanes he went through, it is the first time in 15 years that his two-storey home was extensively damaged.

“This storm was exceptionally big,” he said. “I have been living here 15 years and this was the first time I had damage.”

The house, which is on a waterfront lot, was built 10ft off the ground. The lower level of the home sustained most of the damage when windows were swept out by the storm surge, and the entire first floor was extensively damaged.

While that there was some damage to the living room floors upstairs, Mr Little said fortunately there was none to the roof and the structure.

“This is the most damage I ever had; this was worse than Sandy, Frances, Jeanne, Wilma, and Matthew,” the homeowner said.

Despite the storms, Mr Little said that Queen’s Cove is home to him, his wife and their three children. He said that he will rebuild.

The Littles have returned to their house even though there is no electricity. They are running a generator to power the whole house.

Mr Little has started restoring the walls and is now making electrical repairs so that the house can be inspected and re-energised.

He said it would be good if debris removal could commence in the community to give hope to other homeowners.

“The community is great, but if we can get it cleaned up, people will have some hope. So far, I have not seen a garbage truck come through here yet,” he said.

Most of the single-storey homes in the area had flooding near the ceiling. The surge pushed down concrete walls. Structures were torn apart and swept away. The front portion of one home was broken away and was swept hundreds of feet down the road from its foundation.

Mr Little said despite the situation, he is keeping positive.

“I keep positive and my family are following my lead,” said Mr Little. “If I break down, they would too. But I would really love to see some clean-up effort start in terms of debris removal so that we can begin to have some normalcy here.”

Residents Wayne Burrows and Patsy Roberts are also not giving up on Queen’s Cove.

Mr Burrows, a disabled resident who is wheelchair bound, returned home right after the storm. He said he had flooding almost up to his home’s ceiling.

“I have been through this before many times, but not as bad as this. I lost everything,” he said.

When asked if he would consider relocating, Mr Burrows said: “I staying, I ain’t got nowhere to go. Where you going? If you go over the bridge it going to be worse, and downtown getting flooded now.

“I been living about 14 years in Queen’s Cove, but we did not know the water was coming so high,” he said pointing to his ceiling fan.

Next door, Ms Roberts’ house was also extensively damaged. She said that her back windows were blown out and the water level inside was two inches away from the ceiling in her house. Before the storm, Ms Roberts cleared her home of all furnishings in preparation.

Her son has already started repairs to the home.

“I come and stay here in the day and I go up town in the evening,” she said.

Ms Roberts said she is doing fine and is not worried or stressed about the damage to her house.

“I went through this before with Floyd, and I feel all right. This is not the first or second time – I am glad I am still living,” she said.