Undefeated Sands To Headline ‘Rumble In The Bbay’ 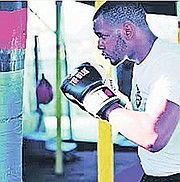 AMRON ‘Sandman’ Sands looks to step back into the ring and continue his undefeated streak next month.

Sands will be one of the headliners of “Rumble In The Bay” to be hosted November 23 at the JCC Center in Tampa, Florida.

Currently with a record of 9-0 (8 KOs), Sands last fought on August 23 against American Thomas Hawkins, when he scored the knockout one minute and nine seconds into round two at the Bryan Glazer JCC Auditorium in Tampa, Florida.

“He actually came to fight. It was good. I knocked him out,” Sands told The Tribune after the fight. “As the fight progressed, I saw more opportunities for me to go inside and work on him. I just threw the over-hand left and the right uppercut and he fell.”

“I signed with DiBella Entertainment because Lou is one of the most trustworthy promoters in boxing and he has great relationships in the business to get my name out there,” said Sands.

“I know that, with his guidance, I can become the heavyweight champion of the world. I can box and I can bang and I’m what the heavyweight division needs. I’m very excited about my future and am ready to put in the work.”

He made his heavyweight debut with a TKO win over Julio Mendoza at the Lakeland Events Center in Lakeland, Florida, on August 5, 2017. He followed with consecutive knockout wins over Eric Evans (November 18 at the Crossroads Arena in Corinth) and Kendrick Houston (February 17 2018 at the Orlando Live Event Center). He spoiled the debut for Darrell Parker with a TKO at the Florida State Fairgrounds Hall in Tampa on May 18.

Sands made his pro debut at home on the undercard of “The Backyard Rumble” with a unanimous decision over Jerry Butler May 26. He returned to the US and scored a knockout win over Cade Rodriguez July 21. He then defeated American journeyman Francois Russell via second round TKO on the undercard of Friday Night Brawl, hosted at the Bryan Glazer Family JCC Auditorium in Tampa.

“I can do it all. I can box, but I favour brawling, because it shows who has the bigger heart. No one has a bigger heart than me,” Sands said. “I just need to listen to my team and let Kevin do his job. I’ll do mine and we can make it to the top.”