Insight: Chipman’S Lone Voice May Be An Example For Others To Follow 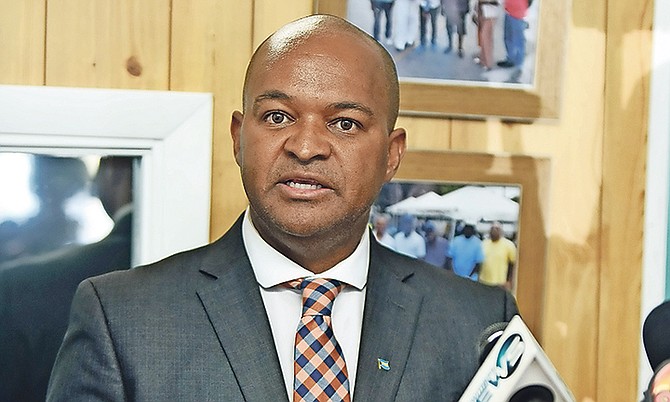 AMID the political fallout from the government’s handling of Hurricane Dorian was the proverbial straw that broke the camel’s back. Former chairman of the Antiquities, Monuments and Museums Corporation (AMMC) and Centerville MP Reece Chipman’s resignation from the FNM – the party that his family helped to build – sent shockwaves through the nation. Having been critical of the government for some time, the “king slayer” who unseated former Prime Minister Perry Christie found his days were numbered in the party.

After he was unceremoniously relieved of his post as AMMC chairman following Prime Minister Minnis’ request for his resignation - citing internal discord at the corporation – the seeds had been planted for an eventual separation as questions surrounding Chipman’s future quickly emerged.

Later in 2018, Chipman joined other colleagues in voting “no” to the government’s decision to increase value-added tax to 12 percent. Firebrand Pineridge MP Fred McAlpine, Bain and Grants Town MP Travis Robinson and Golden Aisles MP Vaughn Miller all voted against increasing the tax burden on the Bahamian citizens – costing them their posts in government.

The decision to fire these MPs from their posts was a very sobering reality that things were business as usual in the government of The Bahamas. If you were not aligned with the Cabinet, you had to be willing to pay for it financially and with your reputation.

The polarising views on McAlpine and Chipman around the nation, in particular, have been quite interesting. When they campaigned for the FNM, staunch supporters of the party praised them and ushered them into Parliament. But when they began to share dissenting views, they had somehow gone rogue.

Ironically, Members of Parliament speaking out for the public good is frowned upon in Bahamian politics. How dare Chipman, Miller, Robinson (at the time) and McAlpine challenge the government to do what it said it would? The nerve of them to consider how certain policies or lack thereof would affect their constituents and the wider Bahamas and challenge the government to do better!

They should be like the rest of their colleagues and beat on tables and chuckle at the buffoonery we consistently witness in the House of Assembly. That is after all what we are paying our hard-earned tax dollars for, right?

Certainly, that notion is ridiculous.

This isn’t student government. We’re trying to advance a nation. And when we’re trying to recalibrate after the worst storm in Bahamian history where the ineptitude of the Bahamian government – past and present – stares us right in the face, the last thing we ought to be doing is patronising grown adults.

Just as we call the child who has life handed to them spoiled, what can we say of a government that seems to require the same from the Bahamian people? Any critique of the government is viewed as those aligned with the Opposition, which by default falls on deaf ears or is met with resentment. The country is only digging its heels and moving nowhere fast as long as that backwards mentality prevails.

And if the country’s leader only wants to be surrounded by ‘yes’ men, then all hopes of him ever maturing to the prime minister we hoped he would become when we gave the FNM a landslide victory on May 10, 2017, are unfortunately futile.

The good book says “iron sharpeneth iron” – a lesson our prime minister can benefit from greatly. Minnis has to be willing to remove his blinders and open himself up to the criticism of his leadership without contempt for the messengers. His trusted few within the ranks of Cabinet have also damaged their reputations for not being able to call a spade a spade in reference to the government’s performance on some matters.

Particularly, the self-congratulatory nature of government post Hurricane Dorian has been gravely disappointing. While we are all doing our best to be patient with the government, as weeks go by and it continues to be more apparent that the government may not be working from a strategic plan, frustration continues to mount.

Having already suffered through an energy crisis on Nassau, which was dwarfed, but also to a certain degree exacerbated by Hurricane Dorian, there has never been a time in the history of The Bahamas when the people needed the comfort of knowing a stable hand was steering the ship of governance.

Chipman’s frustration coming to a head and leading to his resignation should be no surprise. Likewise, his stinging rebuke of the government in his first appearance in Parliament looked as if it was a long time coming. While some of his contemporaries on the backbench remain vocal, many wonder if there will be others following in Chipman’s footsteps.

It has been refreshing to see Chipman’s convictions shine through the dark cloud party politics has placed over the country’s political landscape. And while the whispers of what this will mean leading into the next election – whether Chipman joins the PLP or he and others form a new party – for now, it is good to see this level of boldness on display.

Would it not be grand to see other bright minds who are frustrated with the status quo continue to challenge the broken construct of party politics in this country? Imagine if each member was truly loyal to their constituents, rather than the government – what that would mean for The Bahamas.

We would truly be maximising our potential.

If the PM Minnis only wants to be surrounded by ‘yes’ men, he can only expect the guaranteed crash and burn political doom of Lynden Pindling, Hubert Ingraham, and Perry Christie! Had these men had fewer egos and more common sense, they would not have met such humiliating ends at the polls!

Many persons, myself included, wish there were several more individuals in Parliament as Mr. Chipman with the "BALLS" to buck the system and party leader.

Mr. Chipman had the foresight and fortitude to challenge do nothing Perry Christie and won and he now displays the same fortitude in resigning from the FNM!

I and my family would totally love having individuals as Mr. Chipman to represent them in Parliament!

A PM under our Constitution has to be selected from the PARTY who holds the majority number of seats. He cannot be selected by a majority vote of members of Parliament. Only the Leader of Opposition can be selected in that way. It would be interesting to see 5 members of PLP, 5 members of DNA, 6 members of FNM, and 23 independent members of Parliament elected next time. The PM would be FNM (assuming they replace Minnis, otherwise I would prefer one of the other 2), BUT they wouldn't be able to pass any legislation without the approval of the majority of the independents. A lot of dynamics would occur and a lot of learning would take place by the people, and a lot of good things would get done for all. Of course, Bahamians - by and large - are two much like lemmings walking over a cliff to do something sensible like that. I'm sure they are anxious to get rid of Chipman who is trying to help them. God forbid, anyone should help a Bahamians, legitimately.

Ma comrade TheMad, point to where is it in Colony's Constitution that saith your thing about a PM, has to be selected from the party who holds the majority number of seated House seats, ....