Turnquest: Equinor Will Do Right Thing 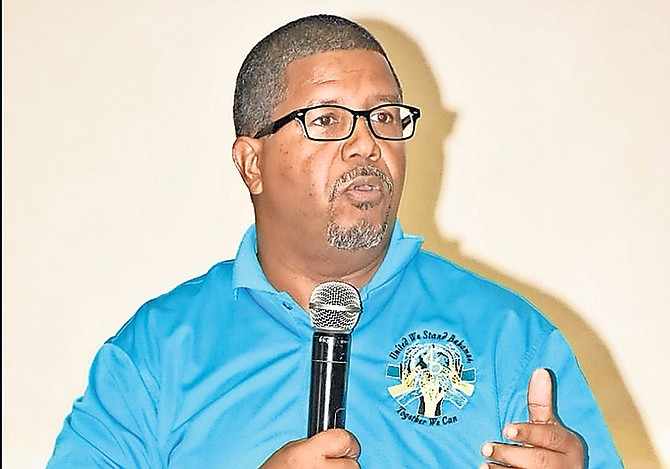 DEPUTY Prime Minister Peter Turnquest told Grand Bahama residents that Equinor has given its commitment to do what is right regarding the clean-up and investigation of the oil spill at its South Riding Point terminal in East End.

At a town meeting on Monday evening, the MP for East Grand Bahama said: “Equinor has given their commitment and has demonstrated that they are going to do what is right by the community, and they have…assets to back that up.

“And so, the investigation as to what happened or why it happened, and what would be the government’s response to that is to be determined between the Ministry of Environment and the AG’s Office, and they will do that work, and progress from there.”

No one from Equinor was present at the meeting, organised by local government, held at St Jude’s Church Hall in Smith’s Point.

This change in figures has raised questions from the environmental group Save the Bays, which is questioning why it has taken Equinor so long to arrive at a correct figure.

During a town meeting in Smith’s Point, a resident of East Grand Bahama raised concerns about the oil spill.

In response, Mr Turnquest reported that some 53,000 barrels of oil and water were recovered, and that clean-up was progressing.

“If you drive past, the area is in tremendously better shape than it was. There are still some areas to clean, and some forestry remediation work to be done, and protocols for that will proceed with BEST Commission.”

He informed residents that Equinor will proceed with investigations and is in the process of drilling some test wells to test the ground water for contamination.

“Even though the initial reports are there is no contamination, that oil has not seeped into the ground, they are drilling test wells to test water to make sure that is, in fact, the case,” Mr Turnquest said.

The East GB MP stated that the company would continue ground water testing in the future because “it takes time, if there is anything (oil), to percolate down to the water table.”

Mr Turnquest also said the company has conducted air testing in the area.

“They have from the beginning had air monitors to investigating air testing for air pollution, which has been below any area of concern.”

While Save the Bays Chairman Joseph Darville commended Equinor for conducting its own water investigation into the matter, he suggested the process should be monitored by the Environmental Health Department.

The South Riding Point terminal had 1,870 million barrels of oil stored when Hurricane Dorian struck the island. Two of the three tanks that contained oil were compromised.

The company has reported that the new surveys confirm that 1,815 million barrels of oil are still intact in the tanks at the terminal.

Mr Darville questioned why it took so long for Equinor to arrive at a correct figure.

Despite the new figure, the activist said this does not diminish the catastrophic impact upon the island’s environment, water table and pine forest.

“The fact is that enough of our environment has been impacted that we don’t even have an estimate as when that will return back to a normal state of existence as it was given to us by Mother Nature,” he told The Tribune.

Who can expect any better from Mr: Turnquest. After all he says OBAN is good for Grand Bahama.

Mr Darville questioned why it took so long for Equinor to arrive at a correct figure.

Our corrupt Minnis-led FNM government has wrongfully allowed Statoil/Equinor to oversee the determination of the cause and extent of the oil spill, and the resulting damage to the environment. This absurd situation is the equivalent of wrongfully allowing someone accused of murder to determine the cause and extent of their involvement in the murder, and the resulting charges that should be brought against them in the circumstances.

WHERE IS THE SCIENTIFIC REPORT DETAILING THE INDEPENDENT AUDIT/VERIFICATION PROCEDURES APPLIED IN DETERMINING THE ACTUAL TOTAL QUANTITY OF OIL SPILLED INTO THE ENVIRONMENT?

WHY IS OUR GOVERNMENT WILLING TO ACCEPT REPORTS FROM EXPERTS HIRED BY STATOIL/EQUINOR AS OPPOSED TO GOVERNMENT DIRECTLY ENGAGING ITS OWN INDEPENDENT EXPERTS TO DETERMINE THE TRUE QUANTITY OF OIL SPILLED AND THE FULL EXTENT OF THE DAMAGE CAUSED TO THE ENVIRONMENT?

ARE MINNIS AND TURNQUEST BEING PENNY WISE AND POUND FOOLISH BY NOT PONYING UP THE FUNDS NECESSARY TO DIRECTLY ENGAGE SUITABLY QUALIFIED FOREIGN EXPERTS TO PREPARE THE INDEPENDENT SCIENTIFIC REPORT WARRANTED BY THE MAGNITUDE OF THIS DISASTER?

WHY ARE MINNIS AND TURNQUEST SO DEAF TO THE LOUD OUTCRYING DEMANDS OF THE VOTERS FOR SUCH AN INDEPENDENT SCIENTIFIC REPORT SCIENTIFIC TO BE PREPARED AND MADE AVAILABLE TO THE PUBLIC?

"DEPUTY Prime Minister Peter Turnquest told Grand Bahama residents that Equinor has given its commitment to do what is right regarding the clean-up and investigation of the oil spill at its South Riding Point terminal in East End."

I wonder why no one referenced the emails from Carnival where the engineers were discussing how to falsify the records while they dumped waste into our waters. Stop trusting people to deal with our country equitably just because they rich, white, speak with an accent or any combination thereof

Talk about the fox watching the hen house.

Sounds pretty similar to Romi saying that the wildcat oil drilling will be done to the highest standard. No notable reference to safety equipment on standby, emergency procedures for oil leaks, expert availability, government officer present on oil rig, nothing. Get ya permit and start drilling.

I heard Trump has been trying to dismantle the EPA is the states for the same reason. All oil companies just have a built in moral compass that is no way tied to money. They want to do the right thing. They will do the right thing? Do you think there might be some oil molecules in your water? You are wrong !!!!!!!!!!! There are none !!!!!!!!!!!!! Everything is under control, with safety to the highest standards. Relax yaseff. Dis the Bahamas, and erryting iree.