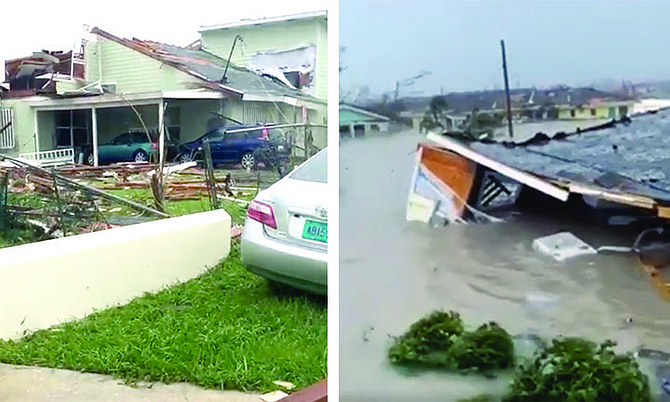 Scenes of devastation on Abaco.

At its maximum strength, the Category Five monster hurricane, the strongest to ever hit the Northern Bahamas, packed 185mph winds. These powerful gusts were intensified by flash flooding and storm surges.

The storm, which made landfall early Sunday morning, left parts of the island in ruins.

While telephone communication into the island was down and electricity had been shut off since 10.15am, social media was flooded with video documenting the severity of Dorian’s wrath.

A scene of devastation in Abaco 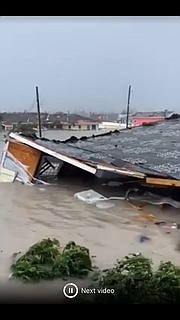 People in Nassau found themselves forced to make impassioned appeals by way of social media for the rescue of relatives left stranded and exposed to the elements after Dorian left them without shelter.

Fear overcame Mulice King yesterday when she was unable to reach her mother Patrice Neely. Her concern was further compounded because in a brief telephone call that was abruptly disconnected, her mother had asked to be rescued.

“The last message she gave me was when she called me and told me that the house roof torn off and they are stranded,” Ms King said in an interview with The Tribune yesterday. “Then I tried to call her again and there was nothing.

“Later on my brother posted a video saying they lost everything. He was recording how all of the neighbours' houses were gone. Parts of houses just flew and went into people’s yards and stuff like that. 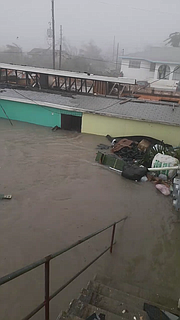 “I am still scared and sitting down here trying to reach my sister and father who live in Abaco.”

For the family, according to Ms King, they could never have imagined Hurricane Dorian would have left this impact, especially for those in the Central Pines area.

“Central Pines is an area surrounded by just trees. It’s not close to where the ocean is. It’s in the centre of Abaco so they wasn’t expecting for the impact to be so severe. They thought that they could have ride out the storm at home because they always do.

Scenes of the storm effects in Abaco.

Over in Dundas Town, it was a similar story.

Carissa Françoise said her five relatives weren’t able to save any of their belongings, not even important documents like passports and driver's licences.

She said: “They told me they were trying to find a shelter, but most of the close ones were flooded and broken.”

When Ms Françoise spoke to this newspaper, hours had passed since she had last heard from her family.

Harrowing cell phone videos sent out by those in Abaco showed some residents holed up in bathrooms and closets praying for God’s protection while others, staying on the top floor of a two-story building, were seen in a video on social media rummaging through belongings that had been ransacked by wind and rain.

Another video showed a group of people walking through water and rain, filing into what appeared to be an Abaco government complex. As if the trauma associated with a Category Five storm wasn’t enough, these people were rushed into the facility by what looked to be Royal Bahamas Defence Force marines who shouted at two women to drop a plastic bag containing belongings and rush inside.

Further, there were reports of a group appealing for help as the roof of the Island Breeze Hotel in Marsh Harbour had been badly damaged.

Before Dorian ravaged the island, there was some flooding seen in areas of Green Turtle Cay, according to a resident there, Marcus Jones, 34.

The cay has approximately 500 people, very few of whom followed the government’s evacuation order.

He too said they did not know the storm would get so strong. Many believed it would max out as a Category 3 or 4.

But by 10.30am the storm had intensified into a Category Five hurricane with winds up to 180mph.

“Maybe we would’ve left had we known,” Mr Jones told The tribune shortly after 10am Sunday. “I think we would have left if we had the means. Mostly everybody still here. Ten to 15 people left to go to family abroad or something but most people are moving to the houses in the higher land area. We have lots of friends on the island who are second home owners so they are letting people who want to stay at their house do so because they have generators. And then there are people staying at the school, the shelter.”

When he spoke to this newspaper, Mr Jones said the downtown area of the cay had already sustained two to three feet of floodwater, a normal occurrence in rainy weather.

Like many Abaco residents, Hurricane Floyd in 1999 remained an instructive experience about what to expect from hurricanes. He said many of the cay's structures survived that event.

Once the eye passed over Abaco, the devastation prompted many to venture out of their homes. Some sought alternative shelter and others were curious to see how their communities feared.

It was something that North Abaco MP Darren Henfield discouraged.

“We have just come through an hour and a half of pounding. Roofs have been compromised, people have called in distress,” he said in an interview aired on ZNS. “But I want to stress to people in the Abacos that we are moving now through the eye of the storm.

“Do not come out doors if you don’t have to. If you are in a compromised place and you can manage to ride out the storm stay there unless you can get out quickly in five, 10 minutes to a next place. This is only the eye of the storm. We expect the back end of the storm to come over us very shortly.

"As if the trauma associated with a Category Five storm wasn’t enough, these people were rushed into the facility by what looked to be Royal Bahamas Defence Force marines who shouted at two women to drop a plastic bag containing belongings and rush inside."

I was tossing your stuff in the water for you. Ya want weather storm and when it go bad ya want a polite and courteous security force to help ya?! These fellas out here risking it, the tone of this section is disappointing.

“Maybe we would’ve left had we known,” wunderground been told me it was intensifying....days before this..