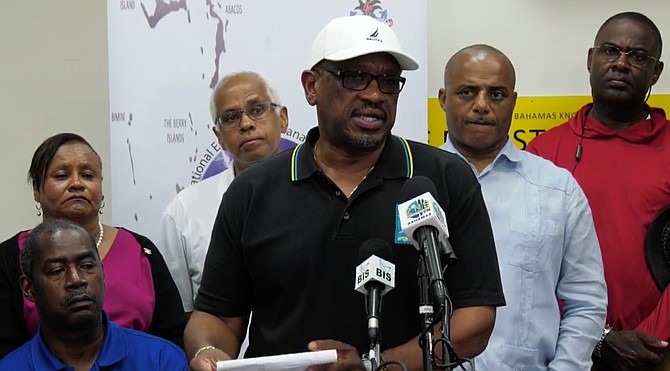 He said when Parliament resumes, it will be a priority for the Minnis administration.

He spoke to reporters at a noon press conference at the National Emergency Management Agency (NEMA), as cries for help poured in from residents in Abaco and the surrounding cays.

Dr Minnis rejected assertions that cost was a factor for evacuations.

“Cost nor communication is an issue,” Dr Minnis said, “the NEMA team representatives and professional went to those areas door-to-door asking individuals with boats available, waiting, asking them to evacuate and if they did not at least allow the children, women and elderly to leave - in spite of that they refused.”

Dr Minnis was asked whether there would be any attempts to rescue residents from vulnerable areas in Abaco, where roofs had been ripped off and cars overturned as Hurricane Dorian battered the island with winds more than 180mph.

“I’ll ask you a simple question,” Dr Minnis responded. “Winds of 180 mph, I ask you tomorrow to go and rescue those people, would you go? I don’t think anybody that fool to go out there nor would I subject their lives to that especially when individuals were warned repeatedly to leave."

Legislation to allow for mandatory evacuations was promised when Hurricane Irma threatened the country some two years ago. Dr Minnis said the promised legislation would now be a priority for his administration.

“There are many legislation we are drafting to bring forth,” Dr Minnis said.

“We never anticipated a hurricane of 180 going up to 200, that places legislation in priority. You gave us five years, we will utilise that five years to put forth the legislation that we promised – you did not promise us one month.”

It was unclear up to press time how many persons are still on the surrounding Abaco cays, where people had been asked to evacuate.

However, one official told ZNS Northern Service that about 200 people were feared to have stayed on Grand Cay. About 30 of them were evacuated from the cay and brought to Grand Bahama yesterday.

“Grand Bahama has withstood many hurricanes, and they were prepared for maximum,” Dr Minnis said.

“They, nor I, nor you would have anticipated a hurricane of 180mph with gusts of 200 and possibly more.”

Dr Minnis said the government was ready to mobilise relief once the all clear was given.

“The government would be assisted by agencies like the American government. The prime minister of Jamaica has called me their team is waiting and ready with a manpower of 180 individuals on the ground ready to come in.”

Dr Minnis said he has also spoken with the prime ministers of St Lucia, Turks and Caicos Islands, and Barbados.

“The world is prepared to assist us,” Dr Minnis said.

Dr Minnis said officials are expecting the all-clear for affected islands to be given later this week.

“We are anticipating all-clear by Wednesday, at that particular time we will move in with all materials. As I’ve said the Americans have been extremely helpful, all materials and equipment are in the vicinity waiting to be dispatched as soon as the weather permits.”

What a foolish statement! The whole purpose for mandatory evacuations based on forecasts is exactly because no one can anticipate how devastating a storm can be. Seems to me the focus should be on damage assessment and emergency responses.

Any Government from July 10, 1973 could have invoked State of Emergency powers in the Constitution and mandate people to evacuate during critical natural or riotous events ...... they choose to act ignorant and let Bahamians run stupid during times of crises ........ SMT

Look at how people driving up and down during the hurricane ........ That's outrageous!!!

The MONS or PM should empower the Police and RBDF to use their powers of arrest AND arrest those fools and put them under house arrest. How can you claim freedom of movement during a Cat5 hurricane natural disaster?????????

But not realistic. There were not enough shelters in Abaco, not grand Bahama either.