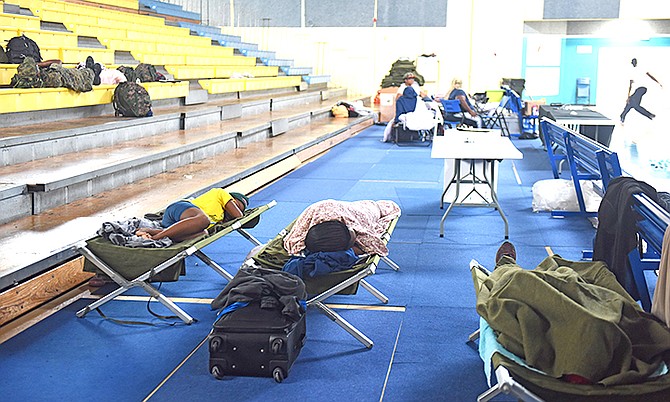 The Tribune visited the New Providence gymnasium yesterday morning to find that most of the residents had already left.

Eneas Street resident Jeanette Saintsville said she watched the water in her front yard rise and although authorities advised Bahamians to stay indoors, she and her two children “had to take that chance.”

Ms Saintsville said: “It wasn’t too bad last night but 3am the water took on a drastic rise even though the rain was so little. It just rises so when I saw that…I packed (last night) because the shelters weren’t open yet. I kept listening to the news so when (I heard) other areas began to call saying about their flooding, I said to Caleb (her son) looks like I will have to call too. I continued to listen to the news, and I kept looking outside. In the meantime, we kept putting stuff together. Upon hearing NEMA stating a shelter is open, which is the Kendal GL Isaacs National Gym, I say well that’s close to me I have to try and get there.

“I know they said not to go outside . . .I had to take a chance because NEMA said that they had other people that called first, so they had to assist them first. I thought I would be last, so I had to walk down to a friend to get a friend assist me with carry my stuff and he help get here. This was 4.30am close to 5 this morning.”

A resident who preferred to be unnamed, said she has never seen this level of flooding in her Pinewood home before.

She said: “I fell asleep and when I woke up the water was coming in through the door. I opened the door and the water just gushed in and it started to reach midway of my calf. My girlfriend who was with me started to panic and said, ‘Let’s call the police we have to get outside.’

“I looked outside and it looked like a sea at the front of my door. We didn’t know how deep it was, so we didn’t know what to do so we called the police. NEMA came for us and all my clothes and shoes were ruined. Everything was ruined.”

Wizky Minnis, Village Road resident, said water came up through her home’s foundation and her apartment has severe flooding.

Ms Minnis said: “I had to actually call 919 and get some help to get out from my apartment. I had severe flooding, so I needed to be evacuated for me, my children and my brother and this is where we came.

“I wasn’t expecting the water level to get up to where it was and how it came in…it didn’t come in through the doors. Sandbags would not have helped me because water didn’t come through the door as usual. I couldn’t use my car because of the flooding.”

She added: “We just had to hurry up and pack some stuff and get out. By the time we got help the fire truck couldn’t even come through. They had to come midway and we had to make it out to them. The water was almost waist deep.”

A Soldier Road resident who preferred to be unnamed, said her family lost everything.

She said: “I woke up about 11.35pm and when I stepped out of the bed the water was up to the box spring of the bed. Water was almost to my knees; after an hour water had past my knees because the back of the yard and the front of the yard was flooded.

“I came here with my two kids and my husband. This is the first time, so we weren’t expecting this to actually happen to us…everything was floating, and I didn’t even hear when the water was coming in. When I woke up, I step into the water.”

Berry Island resident Devante Cooper said he flew over to “do some documents and ended up getting stuck” in New Providence.

Mr Cooper said: “They closed the airport earlier and all the government offices closed early. I was with a family friend and we had flooding waist deep, so they brought us here.

“If the airport reopens probably by Wednesday I’ll be going back. It’s not a big deal and the shelter is better than where I was - less water. The people I came with already left but it didn’t make sense going back because we still getting hit. Berry Island right there to Freeport and Abaco so we still getting affected by that.”

For those whose homes may not be habitable due to flooding, Ms Newbold said officials will keep shelters open.

“If we have that king tide like they say, a lot of persons will experience flooding,” she said.

“They will continue to experience that along with this rain plus the king tide, so we are here to render our service if that’s the case. Come to the shelter that’s the safest thing to do.”

She added: “There are no restrictions, we take in persons that have disabilities. We have the Defence Force here and also the police so what they do is if anyone is unruly, we’ll have help from them. No restrictions you can come and if you need the shelter you can come.”

Ms Newbold encouraged people planning to stay at a shelter to bring “basic stuff” like water and medication.

“They could bring can food, something that they can warm up. We have a facility here they can warm up food. Basic stuff and we’ll provide the stuff that we have for them,” she said.