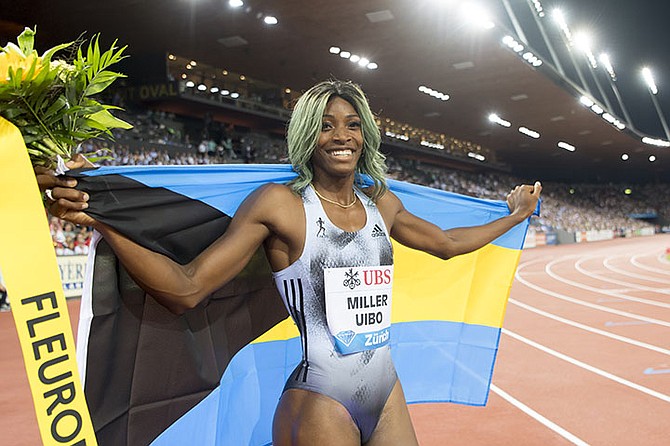 With the deadline closing on Friday for athletes and teams to qualify for the International Amateur Athletic Federation's World Championships, the Bahamas Association of Athletic Associations will have its smallest team, minus relay squads, to represent the country in Doha, Qatar, at the end of the month.

While there are 11 athletes who have made the qualifying standard so far and no relay teams ranked in the top 16 for consideration, hardly any local athletes took advantage of the opportunity to participate in the Blue Marlins' fourth annual Last Chance Meet at the Thomas A Robinson Track and Field Stadium to attempt to qualify on Saturday.

Meet promoter Demaris Cash brought in athletes from the United States, Trinidad and Tobago, St Kitts, Grenada, Barbados and St Vincent and the Grenadines to compete, but very few athletes and no Bahamian relay teams participated.

BAAA president Drumeco Archer admitted that because they have not done a commendable job in identifying new talent over the past few years, "the hens have come home to roast" as they look at what is available for Team Bahamas for the World Championships, scheduled for September 27 to October 6 in Doha.

"Right now, we have approximately 10 qualifiers and we're hoping that Jeffery Gibson may be given an invitation on the basis that the US qualifiers exceed the number of participants in that event," Archer said.

"So we may end up with 11 (athletes), but at the end, my assessment of the team is not a glittering assessment. We know that we have two very strong formidable athletes and that is Shaunae (Miller-Uibo) and Steven (Gardiner).

"Pedrya (Seymour) is growing into her event. She has some adjustments that she has been making in recent times and she is with a new coach."

While Donald Thomas did the qualifying standard for the men's high jump last year, Archer said the Grand Bahamian, who won the world title in 2007 in Osaka, Japan) has just not had a productive showing so far this year.

Thomas, along with Miller-Uibo and Gardiner, both in the 200 and 400m, will be joined by Seymour in the women's 100m hurdles, sprinters Tynia Gaither (women's 100 and 200m) and Anthonique Strachan (women's 200m), twin brothers Lathone and Latario Collie-Minns (both in men's triple jump), sprinter Samson Colebrook (men's 100m) and quarter-miler Alonzo Russell (men's 400m) as qualifiers for Team Bahamas.

Colebrook, however, has already shut down his season and will not be heading to Doha as he has returned to Purdue University where he is preparing for the 2020 Olympic Games in Tokyo, Japan, having already qualified for that as well.

Based on what he's seen, Archer said he's not optimistic about Team Bahamas' performances going into the World Championships.

"I think that the world is expecting Shaunae Miller-Uibo to continue to maintain her dominance in her event and Steven Gardiner to do well as well," Archer said. "But I think that for me, the real test and the real work is to try and develop a new programme and looking at a systematic way in which we develop athletes and maintain progress

"That is a major, major undertaking because it involves he government and the community because that is the only way that we are going to manage and control our athletes."

Archer, a former sprinter who represented the Bahamas at the Carifta Games, said the country was fortunate to have other persons who were able to manage and control the development of the Bahamian athletes.

But he said it's time for the Bahamas to develop its own programme that can brand the next generation of Bahamian athletes.

As for the dismal showing by the relay teams this year, Archer said it's obvious that there has to be some reconstruction of their programme when one consider the fact that neither the women's and men's 4 x 100 nor the men's 4 x 400m relay teams will be competing in Doha.

"We're only as strong as our weakest link," he said. "The country will look at a Steven Gardiner and say why can't we put together a relay team. One man doesn't run a relay and so we've tried to have a number of relay events to allow us to get a berth and we simply haven't been successful.

"There's nothing more that we can say. When you look at the number of 400 metre events for the athletes, they have not performed well this year and the same can be said about our men's 4 s 100m relay, much less the women's 4 100m relay.

"One or two athletes can not simply generate our overall success and so yes it's very disappointing. I believe that we do have athletes in the pipeline, who will give an added compliment to the relay pool and hopefully that will come as early as next year. But this year, I expected lower numbers out of the ordinary because we are going through a transition and that transition has to be closely monitored so we can have a sustainable programme."

With the window of athletes and teams closing on Friday, Archer said it won't matter when it comes to the Bahamas' team selection. He said the country will have to prepare to watch those who have achieved the qualifying standards compete.

"No deadline can create more opportunities for us at this point. We are the end of the season. It's been an incredibly long season. Athletes would have really done as best as they could," he stated.

"I believe many of them would have shut down their season and to prepare for Tokyo (Japan for the 2020 Olympic Games) next year. So the deadline, let's just forget about that and just get ready for next year."

Note: Here's a look at the Bahamian athletes who have qualified for the World Championships, heading into the IAAF deadline for the final selection on Friday:

(opted to shut down season and stay in college).