Boy Feared Lost Rescued As He Sat In Tree Waiting 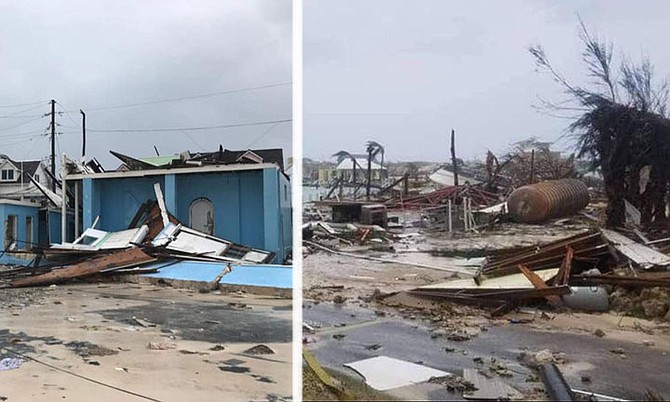 Pictures from social media of destruction in Hope Town, Abaco.

A LITTLE boy feared lost in the devastation wrought by Hurricane Dorian in Abaco was found sitting on a tree, according to an update from his father.

A post from Mack Altidor on Facebook said his son Brenden Dion Altidor was found by an unnamed man who then took the boy to the government complex on the island.

According to Mr Altidor, Brenden was placed on a tree by his stepfather, Kailan “Kay” McIntosh, and told to stay there while he ran off to save someone else.

However, Mr McIntosh never made it back to Brenden, and as the flood waters started to rise, the little boy stayed put as he was told.

Mr McIntosh’s whereabouts remain unknown, according to Mr Altidor, who has since made a post on Facebook about the man’s missing status.

Brenden’s mother, Esperanta Austral, was rendered unconscious after being hit by a block, according to one of Mr Altidor’s posts. He said she has since made it to a shelter, and is nursing “a few bruises”.

The Tribune managed to make contact with Mr Altidor via Facebook, however, he indicated that any interview with this newspaper would have to come after he had successfully located Mr McIntosh.

Mr Altidor’s son was one of hundreds of people feared missing — or worse — in Abaco following the passage of the monster Category 5 storm.

An unofficial list, posted by Facebook page Beauty By Bekuh around 11pm on Sunday, contains the names of at least 342 people, inclusive of men, women, children, and the elderly, whose whereabouts are unknown.

Five people have been confirmed dead on Abaco, including a seven-year-old boy, Lachino McIntosh. Yesterday, Minister of National Security Marvin Dames said he feared that number would rise as rescue efforts continue.

One man, McKethan Nottage, hadn’t been heard from since 10am on Sunday. Mr Nottage lived in the Regatta Condo in Marsh Harbour.

However, his sister, Mitesha Nottage posted on Tuesday that she has received word that Mr Nottage is safe, and that he has been assisting other people. However, she said he hasn’t made contact with her.

Allister Delon Cargill, a young man who was sent to Abaco on assignment by Cable Bahamas but somehow got separated from his team, hadn’t been heard from in 24 hours as of Monday.

However, his cousin Makiya Cargill confirmed on her Facebook page that he has since been located.

Robyn Darville was desperately searching for her father, Robert Darville, and boyfriend, Justin Knowles. The last thing she had heard from the former was that “a big hole” had opened up in his roof and that the “ceiling was caving in”.

Meanwhile, the only thing she had heard from her boyfriend was a request: “Baby pray for me.”

Ms Darville has since located and made contact with Mr Knowles, and although she hasn’t personally heard from her father, she saw that he was marked as safe on a list making the rounds on social media.

“(I don’t know) how accurate it is but all I could do is hope for the best,” Ms Knowles said in a post.

Hurricane Dorian, the strongest hurricane to make landfall in the Bahamas, battered Abaco with 180 mph winds.

It then moved on to neighbouring Grand Bahama, where it hovered for nearly two days and caused extensive damage.

It weakened to a Category 2 hurricane yesterday, with maximum sustained winds of 110mph, and was slowly moving out of The Bahamas.