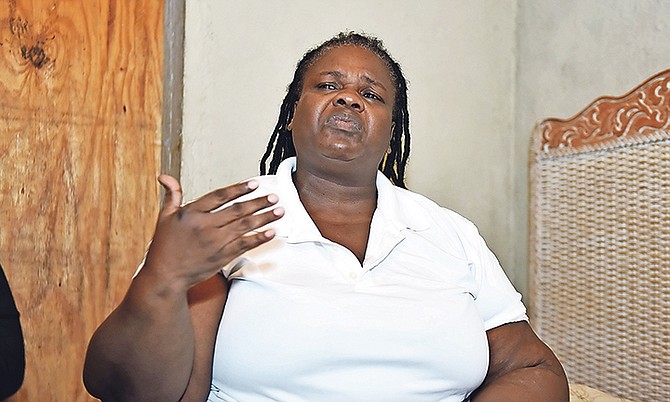 A GRANDMOTHER’S worst nightmare has become a reality for Ingrid McIntosh after she was made aware of her eight-year-old grandson’s reported drowning during Hurricane Dorian in Abaco.

In an interview with The Tribune, Ms McIntosh said yesterday Lachino McIntosh was one of the sweetest little boys anyone would ever come across.

Ms McIntosh said: “Everyone is taking his death hard because we weren’t expecting this. He just left from here about three days ago to go back to Abaco to get ready for school. It’s really hard on us.

“My grandson was here for the summer and when he came from Orlando, he came here to tell me he was leaving to go back to Abaco. I was sitting here and he came and said ‘Grammy, I come to tell you bye’. After he told me that he walked away from the table, turned around and said, ‘Grammy I love you’.”

Ms McIntosh fought back her tears as she reminisced on her last conversation with her grandson.

“Grammy, I love you’ was his last words to me that day,” she said.

Several family members were gathered at Ms McIntosh’s Wilson Tract home yesterday and the aura in the room was depressing as loved ones shared their concern for Lachino’s mother and sister. With limited contact into Abaco, information is scarce.

Ms McIntosh said: “People posted on Facebook that my granddaughter had died. The last I heard my granddaughter was injured. My daughter is alone and no one is there to comfort her in this hard time. I need to hear from my child.”

A family member who did not want to be named, said relatives haven’t heard from their loved ones after they learned of Lachino’s death.

She said: “We really want to hear from my sister and my niece who still are in Abaco. We really would like to hear from them. We can’t imagine what she’s going through right now knowing that it’s only her there.

“I’m sure she has no one to comfort and talk to her or have someone to open up to because it’s just her and her daughter. She had to experience the death of her son and being there alone I can’t imagine what she’s going through.”

The family expressed their need for donations to go towards funeral preparations.

Ms McIntosh said: “We need donations. We really need it. We don’t have it. We could use assistance for the funeral. People can call 242-323-0476 and ask for Ms McIntosh.”

Angry and brutal Hurricane Dorian left only devastation in its wake, snapping utility poles, overturning vehicles and tearing entire communities apart, ultimately disintegrating life for Abaco residents when it churned over the island on Sunday.

At its maximum strength, the Category Five monster hurricane - the strongest to ever hit the Northern Bahamas - packed winds of more than 185mph. These powerful gusts were intensified by flash flooding and storm surges.