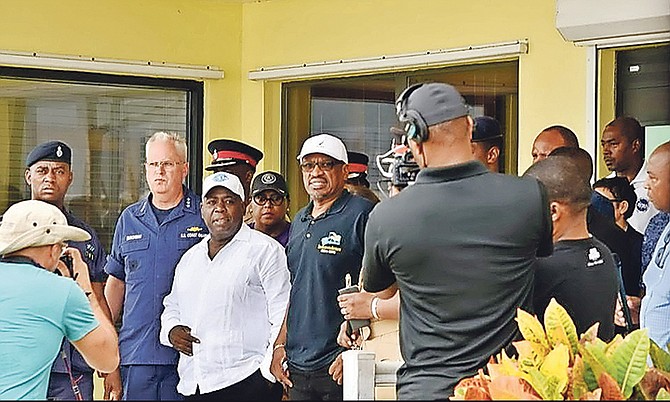 OPPOSITION Leader Philip "Brave" Davis has appealed to those in the commercial sector to provide a minimum of 60 days debt relief to storm victims following the passage of Hurricane Dorian.

He added this should include temporary relief from mortgage payments, rent, electricity and telephone bills.

At a press conference yesterday, Mr Davis said the Progressive Liberal Party has already mobilised to provide disaster relief to Abaco and Grand Bahama, adding party members will set out today at "first light" to visit affected islands once the "all-clear" has been given.

"I am shocked by the savage destruction that has been wrought by Hurricane Dorian," Mr Davis said at a press conference yesterday.

"I am saddened by the loss of life. The PLP pledges to ensure that our efforts to support the general relief efforts and monitor the national efforts to ensure the protection of the public interest."

Mr Davis added that while the PLP will assist where it can, it is the government's responsibility to ensure and provide leadership in this recovery.

He continued: "We'll do our part as best we can. Whatever donations we have to (give) within our resources, we will assist, but we are here to ensure that we support the government in their effort to restore and to ensure that the restoration is being done in a way that normalcy will return as quickly as possible."

In speaking on the dislocation of persons in Abaco and Grand Bahama, Mr Davis further called on the government to "consider incentivising the use of rooms in private homes in Abaco, Grand Bahama and New Providence."

He also appealed to all PLP branches to provide a special collection this month for hurricane relief.

During the press briefing, he also noted that a collection depot has already been established at the PLP's headquarters on Farrington Road, adding that those who wish to drop off dry goods, non-perishable food items and hygiene kits can do so at the centre.

"We drafted the legislation following Hurricane Matthew, but we didn't have the opportunity to complete the process because there was a challenge or there was an issue that arose by legal advice that it may be unconstitutional," he said. "Hopefully, that has been cleared up and now we can move to enact laws that can cause mandatory evacuation."

The Minnis administration also pledged to enact mandatory evacuation laws in 2017, however the idea was never followed through. At a press conference on Sunday, Prime Minister Dr Hubert Minnis defended his administration's stalled pace on the promised legislation, telling reporters that no one could have anticipated monster storm Hurricane Dorian.

He said when Parliament resumes, it will be a priority for the Minnis administration.