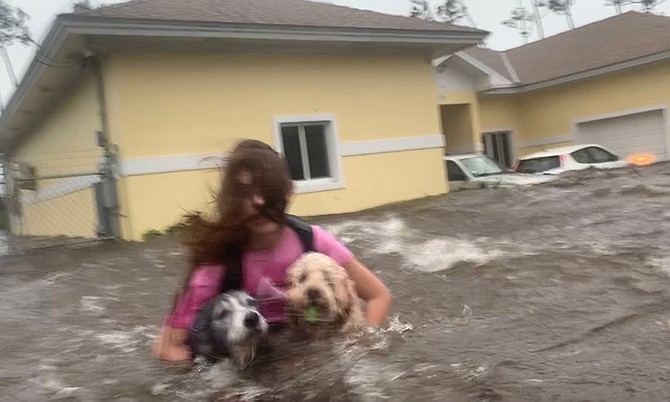 In the video, Mr Aylen’s 21-year-old daughter Julia is seen fighting through the rushing storm surge with two of the family’s dogs, one under each arm, and a knapsack on her back. His 17-year-old son Matthew was crouched on the roof of one of their cars, before the group was able to get to safer ground.

Mr Aylen told The Tribune that he, his wife Christine, and their children planned to ride out the storm at home because he was not expecting the area to flood so drastically.

But early yesterday morning he was awakened to a foot of water seeping into his garage and made the quick decision to escape the home.

“We were in our house. . .and it was just surreal,” he told The Tribune from Grand Bahama yesterday. “We just saw the water on the road, just as you will with normal rainwater, flooding, obviously with wind so it was different. But we really didn’t think we were in any flood danger, and we thought Arden Forest was high ground. We certainly didn’t want to take up room in a shelter nearby at Church of Ascension unnecessarily so we stayed home, as other residents in Arden Forest did.

“We were all just sitting around at about 4 o’clock or 4.15(am) I think. I was asleep and my wife and kids were up and about. My son goes to my wife and says ‘there’s some water coming in the garage, under the garage door.’ They looked out the windows and saw it come up higher to the cars. So my wife came to get me in the bedroom and by that time when we walked back, it poured into the house about a foot high in the space of about 15 seconds.

“I said, ‘where did this water come from’ and she said ‘it wasn’t here a second ago.’ So we all looked out the front and it was up to the level of the windows of the car, the two cars we’ve got out front.

“We tried to make an evacuation plan and gathered our go bags that we had ready and the dogs and then we thought about going in the attic. I actually took a ladder and went up and looked at it and said ‘no, that’s a death trap’. . .I had no way to cut out of an attic.”

Mr Aylen added: “The look on my kids’ faces was just sheer panic. Then we thought about getting on the roof because at this time the water was on the edge of the window.”

He said they also tried to get out the front door but the water surged in. Mr Aylen said he jumped out of a window and spotted dry land in the distance.

“I rushed back and said we are going to dry land.”

He said he took bags with important documents and then his family left the home with their dogs. A nearby family spotted them and helped them to safety.

“This amazing family greeted us,” Mr Aylen said. “These two boys swam out and asked what they could do. I said make sure my wife’s okay and we all ran ashore. I think it must have been their parents (who) piled us all into a minivan, just incredible to do that, a family with dogs and all the bags we had. And they took us to a shelter and that’s where we went to Church of Ascension shelter.”

The family is among scores of Grand Bahamians who were lucky to escape flooding homes as Hurricane Dorian beat down on the island. Minister of Agriculture Michael Pintard, who posted videos to social media on Monday showing more than 20ft of water outside his home, was rescued, according to Minister of State for Grand Bahama Kwasi Thompson.

Six workers from the Humane Society of Grand Bahama who were trapped in the shelter for hours in neck high water have been rescued, according to a post on the group’s Facebook page. It was unclear up to press time what happened to the reported 300 animals who were at the shelter.