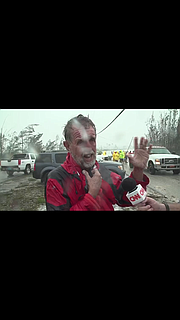 A CRAB fisherman from East Grand Bahama said he could not save his wife from drowning as a powerful storm surge from Hurricane Dorian flooded their home.

Howard Armstrong said he was able to swim out of his flooded home to his boat and make it to safety. CNN reported that once Mr Armstrong was out of the house and went to rescue a neighbour who had been calling for help, he discovered that she had also died.

While these deaths have not been confirmed by authorities, officials have said they expect the official death toll from Hurricane Dorian’s vicious strength to rise. Up to press time there were seven confirmed deaths, however these are related to Abaco.

“It (the water) came over the roof, I would imagine 21 feet at least,” Mr Armstrong told a CNN reporter in Grand Bahama. “We were doing all right until the water kept coming up and all the appliances were going around the house like a washing machine. That’s probably (when) I got hit with something in there.

“And my poor little wife got hypothermia and she was standing on top of the kitchen cabinets until they disintegrated and then I kept with her and she just drowned on me.”

Asked how he was able to get out of the home, he said: “I had a big boat anchored in there. I’m a crab fisherman and I had a 40-footer which stayed there. So I had got out of the house after my wife drowned because you couldn’t be in there anymore and I had no tools to chop a hole in the ceiling. So I saw my boat was still there and I took a chance and swam out to it.”

As Hurricane Dorian inched out of Grand Bahama yesterday, harrowing stories poured in of people fighting for survival in ceilings of homes and others who were brought to safety by civilians on Jet Skis, boats and heavy equipment.

National Security Minister Marvin Dames said yesterday that the situation has all of the makings of a “crisis of epic proportions.”

Mr Dames confirmed that a “few” of the Abaco victims were children. One is eight-year-old Lachino McIntosh, his grandmother Ingrid McIntosh has confirmed.

“Unfortunately what we are getting that a few of them (the victims) are children,” Mr Dames said yesterday outside of Cabinet. “But you know we’re in the beginning of this and this is a very unfortunate occurrence for us as a country, maybe the worst that we would have experienced certainly in our lifetime and I caution Bahamians everywhere that the chances that we find more persons are dead, those chances are real.

“It’s certainly a concern for us, this was a crisis of epic proportions. We want to be responsible. We want to be caring as we report these things. We’re taking into account the sensitivity around all of this. I know everyone is probing and trying to get as much information as they can, but we have to take into consideration as well those families who are still in harm’s way and who may have relatives who have suffered as a result of this.

“But after having said that, the reality of it all is that unfortunately we will see more deaths. I can’t see any way out of it.

“But we want to be responsible and report as they come to our attention. Our officers are moving about certainly in Abaco in areas where they can because it has let up somewhat but there is still a high level of risk.”

In the aftermath of Hurricane Dorian, the minister said the focus will be largely on rescue and recovery efforts.

He said hundreds of Royal Bahamas Police Force officers and those from the Royal Bahamas Defence Force will be deployed to the affected islands.

“We have hundreds of officers on the ground and remember too that as we continue to focus on these islands, we’re not only talking about Abaco and Grand Bahama but we’re also talking about some of the other islands, including New Providence,” Mr Dames said.

“We had to execute a rescue just this morning (in New Providence). We had some persons trapped on the southern end of the island and the police and the Defence Force were coordinating and they were able to successfully rescue those persons and bring them to safety.

“So in addition to the rescue mission we have to also ensure that we protect our islands against those persons who will use this crisis as an opportunity to break the law.

“I send a warning out to those persons in particular whether it’s New Providence or Grand Bahama or Abaco or any of the cays, that we will seek you out and we will deal with you accordingly. . .”

Teams from the Department of Social Services are now in the process of preparing packages for those affected, he said.

“They are already packing bags and parcels and non-perishable items and blankets, etc,” he said. “The things that we know people will need.