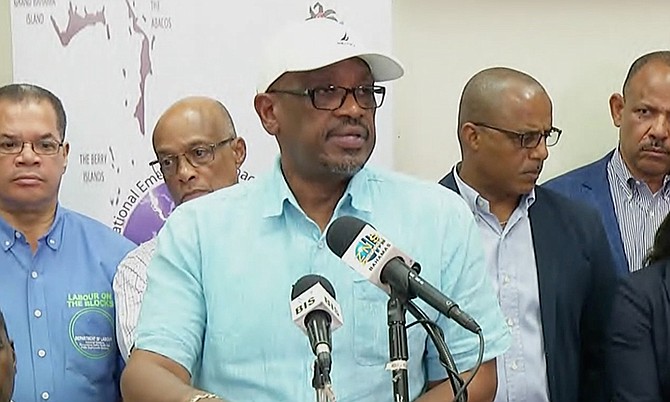 PRIME Minister Dr Hubert Minnis yesterday cautioned the nation to expect more deaths as officials begin assessments of Hurricane Dorian’s wrath, which was described as the greatest national crisis in the country’s history.

The number of confirmed deaths in Abaco climbed to seven yesterday as two victims transported to Nassau died at hospital.

Health Minister Dr Duane Sands did not reveal the identity or gender of the two victims; however, he said one was a 71-year-old who died from a head injury, and the other a 39-year-old who had no obvious signs of injury but had profound metabolic challenges.

At a press briefing at NEMA’s headquarters, Dr Minnis said he could not speak to reports of deaths in Grand Bahama until he saw the facts.

Dr Minnis said:“Of the 25 individuals that were transported to New Providence, two has already succumbed, that will take the number of deaths to seven. Again, I want to ensure and inform the Bahamian population that we can expect more deaths to be recorded. This is just preliminary information.”

He appealed to the nation for compassion for storm victims and their families, asking people not to send or share images of the dead.

Citing the government’s top priority as “search, rescue, and recovery”, Dr Minnis lauded the “bravery and fortitude” of Bahamians who endured hours and days of horror while the monster storm raged through Abaco and Grand Bahama; as well as the courage of first responders and volunteers who sprang into action with whatever resources they could find.

Assisted by the US government, Dr Minnis and a delegation including opposition leader Philip Davis and NEMA director Captain Stephen Russell conducted a fly-over assessment of Abaco yesterday afternoon.

Dr Minnis said more than 60 percent of the homes in Marsh Harbour, Abaco suffered extensive damage, adding shantytown The Mudd had been “decimated”.

Of Abaco’s devastation, he said the southern part of the island was not as devastated as Marsh Harbour. The national airport is underwater, with its surrounding runway and areas described to be like a lake.

Dr Minnis said Treasure Cay airport’s runway was still functional but surrounding roadways were underwater. While Cooper’s Town was not as badly damaged, a community situated outside its boundaries but before Treasure Cay was said to be cut off from the main population.

Dr Minnis said about 30 individuals were trapped in the area and waved yellow clothing and bedding to bring attention to their presence as the assessment plane flew overhead.

A helicopter was dispatched to rescue them, he said.

Speaking to international aid, Dr Minnis said a 600ft Royal Navy vessel would be delivering food to residents in Abaco last night. He underscored an outpouring of support for hurricane victims, and urged people to donate to reputable organisations like NEMA, The Bahamas Red Cross and Salvation Army so that aid could be effectively coordinated.

Teams of police officers and defence force officers have been dispatched to Abaco, and are expected to arrive in Grand Bahama today.

Dr Minnis noted the measure was taken to secure Abaco and ensure there was not an increase in violence or looting.

Notwithstanding the devastation, Police Commissioner Anthony Ferguson declared the island “pretty safe”. Mr Ferguson said: “You can appreciate that in such a disaster buildings are breached and it is very likely that persons would use the opportunity to enter, but we do not have any information that suggests persons are actually taking over any of those places. Abaco is pretty safe despite the devastation by the hurricane.”

Mr Ferguson said it was too early to reveal further details about the Abaco deaths.

As of 8pm yesterday, the centre of Hurricane Dorian was 85 miles north of Freeport and had picked up speed moving away from the country northwest at 6mph. After stalling over Grand Bahama for more than 24 hours, Dorian had weakened to a Category 2 storm.

However, senior meteorologist Trevor Basden cautioned tropical storm force winds would continue to impact the Northwest Bahamas as the monster storm had grown with winds extending 175 miles from the center.

Surge water levels in Grand Bahama and Abaco were expected to subside through the evening yesterday.

While hurricane warnings have been discontinued, Mr Basden said an all clear for the country would not be issued until today at 5am.

Of healthcare providers, Dr Sands said: “Given the magnitude of the event, it is absolutely amazing they have managed critically ill patients with head injuries, spine injuries, lacerations, broken bones. They have done an absolutely phenomenal job under incredibly challenging circumstances.”

He appealed for immediate assistance with safety, security, food and water; and further outlined medium and long term needs to rebuild infrastructure.

Dr Minnis told CNN Bahamians were resilient and those on affected islands will not likely want to leave their homes.

“We will rebuild,” Dr Minnis said, “we’ve been down this road before, though not as bad as this. We’ve experienced hurricanes with great degree of destruction. We will rebuild the two islands devastated or destroyed and bring them back in a functional state as soon as possible.”

We know that they know that there are many more deaths. The government is out of their depths on this one. Condolences to the bereaved!

We are ALL "out of our depths".

One thing is for sure, as a small nation we will never have the resources to cope with the consequences of both the Haitian invasion and category 5+ hurricanes. Anyone hear anything about what the Haitian embassy in the Bahamas is doing to help the 14,000+ illegal Haitian aliens who are now left totally destitute under life threatening conditions in the aftermath of Hurricane Dorian? Is the Haitian government seeking financial and other support from the Minnis-led FNM government (Bahamian taxpayers)?

... but that's where strategic planning and execution comes in. Notice how quickly The US Coast Guard was able to get in and render assistance while the PM was crying on TV? Where is NEMA in all of this and what disaster management training does the leadership actually have?

Any updates on when the police and defence force are arriving in Abaco? People need help and security desperately.

The increasing number of reports about wide spread looting are most alarming. This was totally predictable but clearly not planned for by government!

I will leave it for you to tell the fearful many awaiting to be rescued under life threatening conditions that the Minnis-led FNM government "have responded beyond expectations". Why haven't laminated fliers been air-dropped to provide vital information to those awaiting to be rescued in the hardest hit and most inaccessible areas? Surely some news, any news, about what's being done to help these poor people would be welcomed by them.

People's lives are at stake and the government officials who are supposed to have the greatest responsibility for the very urgent rescue tasks all seem to be in 'spin mode'. Show us the defenseforce men and their vessels in action in Grand Bahama and Abaco - most of us are getting sick of seeing politicians, NEMA and other government officials engaged in meaningless photo ops and briefings designed to spin the press and other media at large.

Why haven't laminated fliers with vital info, food, water and most commonly needed medicines been air-dropped to those awaiting rescue in the hardest hit and most inaccessible areas? Surely some news and support, any news and support, would be a greatly welcomed respite for these poor suffering people.

It's a safe bet the next catastrophic category 5+ hurricane hit for the Northwestern Bahamas will occur within the next decade. Any home or other building built to withstand 200 mph winds would drive up construction costs to levels unaffordable by most Bahamians and Bahamian owned businesses. The same applies to infrastructure needs and costs usually borne by the government (taxpayers). Minnis would be wise to stop shooting off his mouth about government's commitment to rebuilding. He should be totally focused on personally overseeing the rescue effort to keep the loss of lives in Abaco and Grand Bahama to the absolute minimum possible. It's the very desperate people's time Mr. Minnis, so step up to the plate as the country's leader and show that you are completely focused on saving as many lives as possible. After all, isn't that what doctors like you are supposed to be well trained for (?)

Dr. Minnis is personally very involved in the rescue mission, you moron, while being wise enough to work alongside and be guided by the professional organisations that specilise in search, rescue and recovery. My family in Abaco is unaccounted for and I am extremely worried, but I am very proud of the leadership of Dr. Minnis and his Cabinet, and the essential workers, medics, emergency workers and volunteers and everyone else who are working tirelessly on behalf of the people, as well as the U.S. and British forces and others, including DOMINICA. You need to stop posting absolute negative nonsense and get a life and try to help your fellowmen rather than running your bitter, ill-informed mouth. Have a good day, Sir!

@MJ: You really shouldn't be wasting your time trolling me if your family is truly unaccounted for in Abaco. I know I wouldn't be trolling you if that shoe were on the other foot, i.e. my foot.

It seems the Minnis-led FNM government has unleashed a whole bunch of you who are trying to suppress any and everything negative being said about the government's obvious unpreparedness and mishandling of the aftermath of Hurricane Dorian. Our government is learning on the fly which takes precious time when people's lives are at stake with the passing of each and every day under the most horrendous conditions. You obviously have not seen much of the critical and unflattering news coverage on U.S. national cable TV and network TV stations in South Florida.