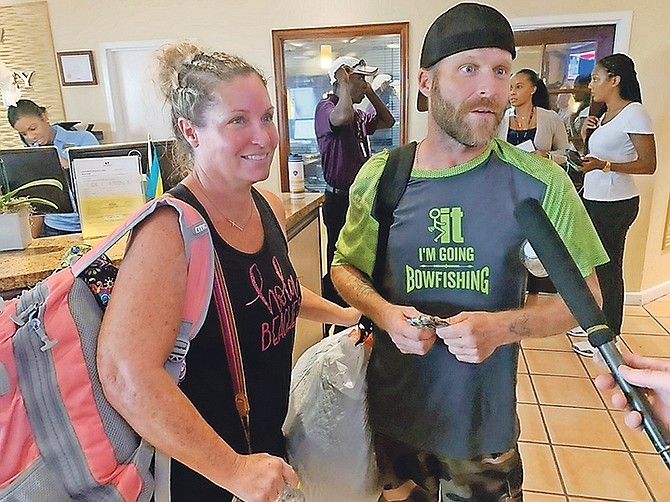 Texan siblings Bryan and Heather Lee were evacuated from Abaco into New Providence on Tuesday.

AFTER spending just over two days in a concrete room with no roof as Hurricane Dorian raged through Abaco, a group of storm-weathered American tourists told The Tribune “there’s nothing left”.

Texan siblings Bryan and Heather Lee, and their friend Joe Hernandez, were rescued by the US Coast Guard shortly before 5pm on Tuesday. Moments after landing in Nassau, they claimed looting had begun as there was limited food or water on the island.

While they could not personally confirm reports, they told The Tribune they heard stories of injuries and extreme flooding in the Mudd shantytown.

“There is no electricity, so for two days we sat in a house with two inches of water until we could get to the hospital,” Mr Lee, 45, said. “There was no trees, not a leaf on anything. When we opened the shutter doors, there was a car about two feet from coming into our house, a whole car that had been picked up and put there.”

The Lees and Mr Hernandez were staying at a condominium complex called The Crossings in Marsh Harbour. They made their way to the hospital where they reportedly found hundreds seeking shelter. According to officials, nearly 400 people have sought shelter at the medical facility.

Also making the trip was a US-based reporter, who declined comment, and two injured “islanders”. The injured persons were loaded onto ambulances shortly after touching down at Odyssey Airport.

She said the storm left her “terrified”, adding: “I have never been that scared. The looting was terrible, I didn’t see any fighting but tons of looting. The trees don’t even have any leaves on them, it’s destruction.”

“Worst experience of my entire life,” Mr Lee of Sealy, Texas, added. “We live inland but this is like breathing right on the coast. We’ve been out of power for three days living in a house with our friend, the roofs blew off. We were in a concrete room everything around us gone.

“A concrete wall shaking, loud deafening,” Mr Lee continued. “It was terrible, I’ve been through a lot of crap most worst experience of my life.”

Where inFuc# is the colony's elected government?
Our comrade Abacoians have been left fend for themselves whilst the prime minister is out and about - wherever that be's - posing for pre 2022 general election photo ops .... Severe looting is ongoing at this very second ...the populaces various Abaco islands, have family members missing ..... there has been zero signs of the defense forces, nor constabulary .... Comrade Abacoians are armed and prepared deal with looters .... ..

Yes, please keep making this about politics with your daily unintelligible rambling. It's what the Bahamas needs right now. You should be ashamed and not only about your limited grasp of the English language.

Really! Yeah, the first action the colony;s PM took was tissue a stern warning to the colony's populaces about not believing anything what you will be reading on social media platforms, yes, no ....
Mother nature can turn into one nasty, cruel son of a bitch but not to the degree of a central government, 100% missing from Abaco ... This has not a damn thing do with politics .... In fact, comrade Abacoians in the majority, elected this incompetent at governing cruel government .... Abaco to a large degree has been turned into a rubble - with possible bodies loved ones burred under them ....making thousands populaces Abaco into overnight survivors and the still unknown dead ....

@lobsta: It seems the Minnis-led FNM government has unleashed a whole bunch of you who are trying to suppress any and everything negative being said about the government's obvious unpreparedness and mishandling of the aftermath of Hurricane Dorian. Our government is learning on the fly which takes precious time when people's lives are at stake with the passing of each and every day under the most horrendous conditions. You obviously have not seen much of the critical and unflattering news coverage on U.S. national cable TV and network TV stations in South Florida.

No wonder very first action taken by colony's PM was to warn the populaces - not to believe anything they read on social media - even CNN must have been recruited be playing politics about government's lack emergency response ..... weird other comrades have been able reach some stranded members populaces but not colony's defense forces and constabulary ....