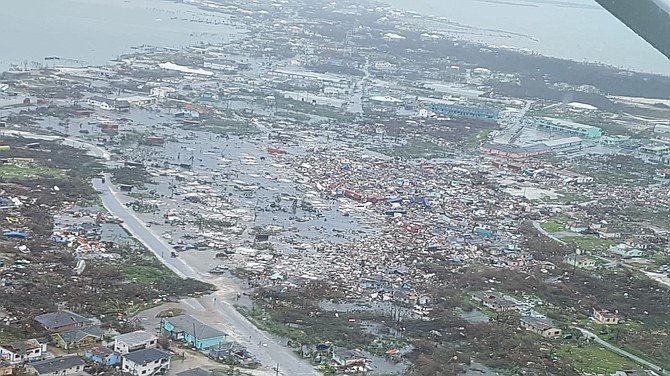 “It’s total devastation,” HeadKnowles founder Lia-Head Rigby told the Associated Press yesterday. “It’s decimated. Apocalyptic. It looks like a bomb went off. It’s not rebuilding something that was there; we have to start again.”

Speaking to reporters about the state of the island, Ms Head-Rigby said the situation on Abaco is dire.

“We just want to make sure…when we put out the call to help please help. No one is going to be able to stay there and fix up. They’re going to have to move home here to Nassau or to somewhere else and rebuild so this is beyond HeadKnowles, this beyond us. We can come and aid like we are doing but they’re going to have to rebuild. The insurance companies will have to jump in this, you already know it was coming get the cheques ready for the Bahamians please and we are here to help.”

HeadKnowles has 30 planes ready to drop off aid and rescue volunteers as soon as they can land on the island.

A view of the destruction in Abaco Tuesday.

“We have a lot of…I got 30 planes just sitting in St Pete ready. We have all the medics ready and the doctors are flying in on the caravans today. They’re coming here then they’ll be coming. It’s a huge operation already we have, and we just needed to get here.”

Red Cross spokesman Matthew Cochrane told the AP more than 13,000 houses, or about 45 percent of the homes in Grand Bahama and Abaco were believed to have been severely damaged or destroyed. UN officials said more than 60,000 people on the hard-hit islands will need food, and the Red Cross said some 62,000 people will need clean drinking water.

A hurricane chaser caught up in the storm in Abaco last night tweeted out his experiences of the hurricane.

Josh Morgerman, a Californian with a TV series, Hurricane Man, on the Science Channel, sent out a tweet saying: “Yep, I’m alive. Made it to Nassau. #Hurricane #DORIAN: By far the most intense cyclone I’ve witnessed in 28 years of chasing. Thought I was playing it safe by riding it out in a solid-concrete school on a hill in Marsh Harbour. Thought wrong.”

He added: “Winds pounded the building with the force of a thousand sledgehammers. Crept out during eye to find school mostly destroyed, cars in parking lot thrown around and mutilated. Barometre said 913.4 mb.

“Frantically piled into few functioning cars (one of them mine) and relocated to government complex before backside struck. Building filled with terrorised refugees, many who had swam to safety or abandoned collapsed houses. The calm eye saved lives—gave victims chance to relocate.

“Whole neighbourhoods were swept by mighty surge higher than anything in memory. Areas above water had catastrophic wind damage. Many deaths reported from drowning, flying debris, and collapsing houses. Medical clinic overwhelmed. An absolute catastrophe. SEND HELP TO ABACO ISLANDS.”

Abaco needs to be quarantined and cleared of residents .......... it's a social disaster waiting to happen from mangled infrastructure, rotting bodies, stagnant water and lawless criminals.

Any updates on when the police and/or defense force will arrive in Marsh Harbour? Heard it's getting dangerous!!

I will leave it for you to tell the fearful many awaiting to be rescued under life threatening conditions that the Minnis-led FNM government "have responded beyond expectations". Why haven't laminated fliers with vital info, food and water been air-dropped to those awaiting rescue in the hardest hit and most inaccessible areas? Surely some news and support, any news and support, would be a greatly welcomed respite for these poor suffering people.

With missing family members, I would think the last thing you should be doing is trolling me. If that's truly so, I hope you eventually learn they are safe. Not sure why you would be interested in my charitable endeavours because I'm not the least bit interested in yours. In any event, I've found over the years that those who like to talk about the charity of others are often the least charitable among us. As for your efforts to suppress anything I might have to say, well, good luck with that.

Nothing less than I would expect from you and I'm sure,as usual, that you're laughing your ass off!

You won't see me LMAO anytime soon.....too many fellow Bahamians hurting in the worst possible way.

Comrade Messenger, there is not single member populaces that's not pulling for the safety. welfare and health every single Out Islander - but I have seen dozens and dozens of pictures of the prime minister doing his photo ops but not a single picture of Defense Forces members or boats, nor of the Constabulary conducting rescues anywhere on Abaco, yes, no ...

So true! People's lives are at stake and the government officials who are supposed to have the greatest responsibility for the very urgent rescue tasks all seem to be in 'spin mode'.

Ma Comrade, on the ground locals in Marsh Harbour are reporting serious looting as of this very minute. The seriousness demands the PM's quick response away from his photo ops .... This is not some pre 2022 general election campaign ....