From Car Crash To Fleeing Tornado 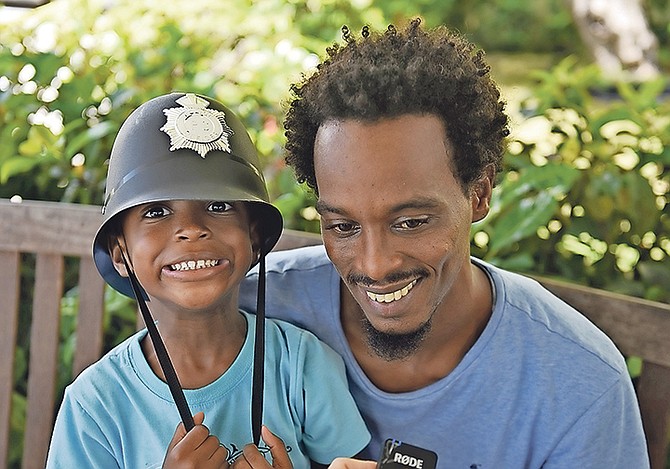 THIRTY days after a “tragic” car accident, dietitian Shanishka Cambridge found herself “running from a tornado” in her Marsh Harbour home.

In a mad dash for safety, she and her son ran to a closet while her husband pushed against a door to stave off the ferocious wind.

Dorian’s raging gusts had already torn off parts of her home’s roof.

“I work at the Department of Public Health at the Marshall’s Heath Care Centre as a dietitian,” the 34-year-old told The Tribune shortly after she landed at Odyssey Aviation in Nassau on a rescue flight.

“One month prior to this hurricane I was in a tragic car accident when the doctor, nurse and I were travelling to another clinic to work and we were all airlifted. Thirty days later I’m in Hurricane Dorian, running from a tornado in my house with my husband and son trying to save our lives.

Mrs Cambridge said she remembers feeling like she was going to die while clutching her broken arm.

“It’s very depressing, I’ve been in two life threatening situations in a matter of 30 days,” she said. “I was already hospitalised because of the accident (I was in) A&E, ICU.

“There was flooding in our home; (despite) our home being on a little hill it still flooded because the strong winds blew rain water through the air-condition, through the windows, under the door, wherever it could get the water in so it began flooding even before the roof tore off.”

She added: “Everything was destroyed in the house almost like we should just burn it down and start over.”

Anxious relatives from New Providence also gathered at the airport waiting on their loved one’s arrival.

Nassau resident Sandra Cooke told reporters that her sister-in-law was trapped under her roof for more than 16 hours. She was brought into Nassau from Abaco yesterday.

Ms Cooke said: “My sister-in-law’s roof collapsed on her, she was trapped underneath the roof for 17 hours and my brother couldn’t find her. He sent the dog in there and he found her, but he couldn’t lift the roof off of her, so she was stuck underneath that roof for 17 hours. It was a break in the storm and the neighbours came over to help and they took her cross to their house. Today was the first day we were able to get her out. She can’t walk.”

Martysta Turnquest, who has family in Abaco, is working to put together ‘safe lists’ so worried families can get information on their relatives.

“As you heard there are a lot of communities (that) people aren’t hearing about and their loved ones are reaching out to us because we have done our best to send out safe lists and any information we were able to gather on our settlements.”

On Tuesday, the US Coast Guard started airlifting people in need of urgent medical care out of Abaco.