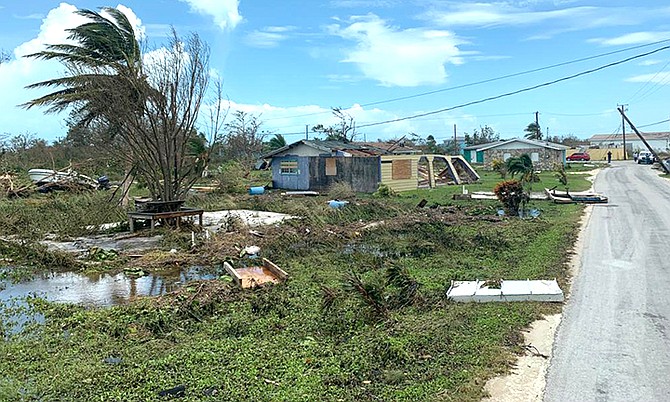 NO water, no power, no fuel, and no communication was the critical plight facing hundreds of people across the Abacos yesterday.

Communities in Treasure Cay, Man-O-War Cay and Moore’s Island have been devastated by deadly Hurricane Dorian.

And while critical supplies are running low, the total communications blackout has been a major source of anxiety as many fret over the safety of loved ones on mainland Abaco and neighbouring Grand Bahama. 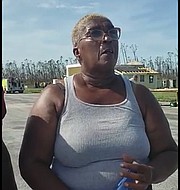 “The community has been destroyed,” said Stephanie Hield, chairman of the Treasure Cay township, “the houses, hotels, completely gone. You can go through about one or two of them (houses) and they are still there but other than that (nothing).”

Ms Hield estimates more than 90 percent of the homes and businesses have been destroyed, and with roads leading out of the community still blocked, security is a mounting concern. She said communities in Man-O-War Cay and Grand Cay have all been accounted for.

“We haven’t had security (in Treasure Cay) for the whole hurricane, just one policeman. People are looting, looting has been terrible, no violence but they gone into (empty) houses, food stores, liquor stores,” she claimed.

She spoke to The Tribune from the tarmac at the settlement’s airport as US military planes flew overhead but did not stop. The airport building had been torn apart and scores of people waited around the runway’s edge, hoping for supplies like roof tarps or a flight off the island.

The settlement’s three shantytowns, Sand Banks, L & H, and The Farm, have been decimated, creating desperate conditions as much of the resident Haitian community had no food, water, or clothing.

“My house is totally gone,” said Mark Russell, a 45-year-old working in marine construction who has lived in Treasure Cay for 18 years.

“My new home I didn’t even get to live in it yet, just watched from across the street at my friend’s house as it got picked up off its foundation.”

Mr Russell said he now lived with ten people, and making the best of his situation because there was nowhere else to go.

Another resident, Curtis Mills, 49, said he was sheltering 20 people in his home and had no idea what would happen when their food ran out.

Rev Stafford Symonette, 69, said he and five family members braved the storm in a Kia Sportage for three hours before moving to a Chevy Suburban after his home “imploded”. He said he heard what sounded like a freight train before the walls “just came in”.

While in the Kia, a portion of his roof blew off and landed on top of the car.

“It was the greatest miracle,” Rev Symonette said, “that was either a gust or a tornado.”

“That was one of those devastating hurricanes I’ve ever seen,” said airport manager Clyde Cornish, who asked The Tribune to pass on a message to his two daughters in Nassau.

Mr Cornish said second home-owners have been flying in with supplies, but conditions were dire for the roughly 1,500 people who live in the area.

“It’s going to take a national effort to get this back to where it used to be. We’re hearing that people have died (in Abaco) but we haven’t had a count as yet. We had one person die in Treasure Cay, but we’re hearing the numbers they throwing around and anxiety is very high right now.”

Mr Cornish added: “We don’t have no communication right now, I’m happy that you came and talked.”

Both Ms Hield and Mr Cornish confirmed a woman died in Treasure Cay but did not know her name or the circumstances of her death. There were no body bags in the settlement, and at the time, Ms Hield said she was not sure whether the woman’s body had been moved.

Ms Hield said: “A young man got his hand cut off and his mommy ran out. I don’t know if it’s a heart attack or what.

“We have to work now to see if we can get that body into Marsh Harbour because the roads were blocked due to the conditions.”

The Tribune travelled to parts of Abaco with Progressive Liberal Party Leader Philip Davis, and a small delegation.

On Moore’s Island the PLP delegation represented the fishing village's first contact with the outside world since the storm.

Economic activity on the island has come to a standstill with all four docks destroyed, and no heavy machinery to assist with clearing debris.

The tiny island is just 7 by 3.5 miles, and had a population size of around 600 but the number was said to have dwindled to around 450 with people leaving for mainland Abaco and Grand Bahama for work.

They have been without telecommunications for about two weeks. Chief Councillor Dalson Stuart has a satellite phone, and sometimes residents can make a call on BTC’s network if they traverse atop a hill. Noting that residents had already started to clean up by hand, and were committed to self-reliance, Mr Stuart said they still desperately needed assistance.

The reverse osmosis plant cannot run without power, and as islanders are forced to use drinking water to also bathe and cook - supplies are critically low.

Mr Stuart said: “So we have a lot of family over there and we haven’t been able to hear from them, so it’s a lot of anxiety. We are cut off from everybody and if the mailboat comes right now there isn’t even a dock for it to come to.”

“As much as it hurts me to look around and see what we are going through, when I think about our neighbours and family next door it still hurts more because I know that they are in a worse state than we are right now.”

Yesterday, Dornell Davis, 59 and Verna Stuart, 50, asked The Tribune to send out messages for their family.

Ms Stuart said: “I just want to let my children know in Central Pines (Marsh Harbour) that we are ok and I would very much like to hear from them. God is good and all is well.”

Its time for Haiti to step up and repatriate some of their citizens. We should not have to bear this burden alone.

I am not hearing a whole lot about what NEMA is doing either!

This is not the time for our government to be learning about search, rescue, relief efforts on the fly. Time is not on the side of many of the destitute survivors who are now clinging to life by a thread. It's a well known fact that most hurricane-related deaths occur not during but rather after the hurricane, e.g. Puerto Rico last year. Safety issues should also be of highest concern because it's a well known fact that very desperate people do very desperate things when they must go into survival mode. Many defense force boots and military boots of assisting foreign agencies should already be on the ground everywhere in Central and North Abaco.