'All I Have Left Is A Photo Of My Grandson' 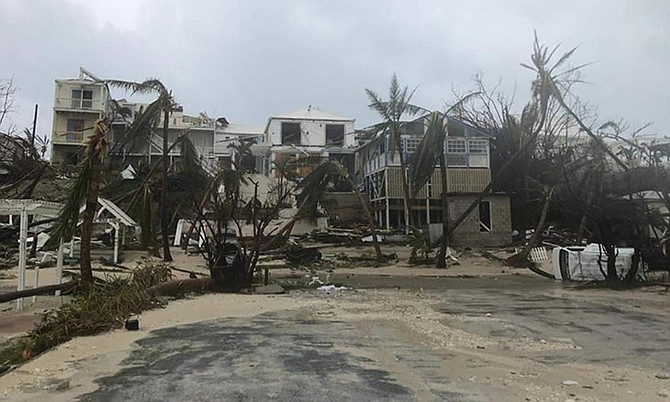 THE only thing Patricia Darville took with her when she was rescued from decimated Man-o-War Cay on Wednesday afternoon was a photo of her one-year-old grandson.

The 74-year-old pridefully shared the photo as she recounted how she, infant Logan Thompson and his mother had to climb into the cupboards to escape flooding as parts of their home caved in.

She and her husband Leslie - also 74 - had come to Man-O-War Cay from Exuma, and like much of the country, severely underestimated the damage monster storm Hurricane Dorian would bring.

“We didn’t expect this,” she said when asked why they didn’t evacuate,”...and we didn’t want to leave our family.”

The National Emergency Management Agency did issue an evacuation order for Man-O-War Cay and other small cays in Abaco, however it was not mandatory.

For Mrs Darville and scores of other residents, riding out the storm “was devastating”.

“The bathroom caved in,” she continued, “parts of the roof came off. (Logan’s) crib was full of water. When the eye came, we tried to escape but there was so much water. The neighbour came and rescued us, and luckily they just had leaking. Everything is damaged.”

Man-O-War is a narrow island only 2.5 miles long with a population of around 200. At some points, the distance between harbour and beach side of the island is just 100m.

Conditions deteriorated on the cay on Saturday, Mrs Darville said, and did not start to improve until Tuesday.

“We had no power for days because the generator flipped over, that was a tornado I think,” Mrs Darville continued. “I don’t know; it could take years to rebuild, lamp poles are down, everything, all over, ruined.”

Dorian ripped through the Abacos as a brutal, slow-moving Category Five hurricane, exposing the country to what has been described as the greatest national crisis in its history.

When rescues began on Wednesday, Logan and his mother were among the first groups to get on helicopters for Treasure Cay. She and Mr Darville, along with Joann Sands, would not get their chance to leave until later that afternoon.

Mrs Darville said she could not take her suitcase, which was filled with wet clothes, but made sure to grab her photos of Logan that she had in a sealed plastic bag.

Recalling the horror of Dorian, Ms Sands said it was “three times as bad as Floyd” - referring to Hurricane Floyd of 1999, which brought some destruction to Abaco.

Ms Sands has lived on the cay for nearly 50 years.

She said she did not think there were any storm related deaths in Man-O-War Cay.

She spoke to The Tribune as she waited by the airstrip for any chance to get off the island, ultimately to her family in Florida.

“It is still standing, we didn’t lose any lives, but we’ve just had almost total devastation.”

Ms Sands added: “I’m trying to get to Florida as soon as possible.”