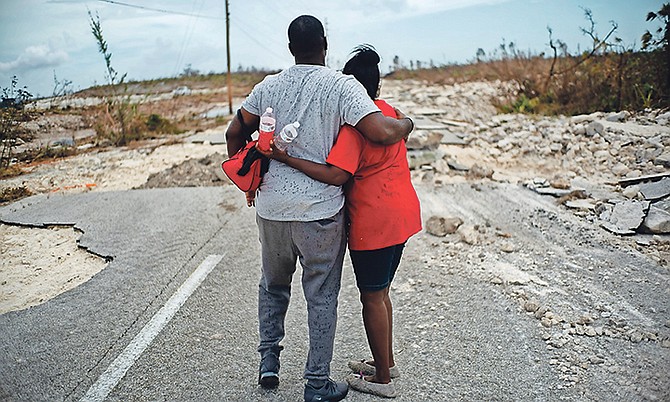 A couple embraces on a road destroyed by Hurricane Dorian as they walk to the town of High Rock to try and find their relatives in the aftermath of Hurricane Dorian in Grand Bahama yesterday. Photo: Ramon Espinosa/AP

GRAND Bahama residents were desperate to get to East End yesterday to check on relatives and loved ones who they have not seen or heard from since Hurricane Dorian landed on the island.

Scores of Grand Bahama residents could not get through flood water on the Grand Bahama Highway to access the area.

While attempting to get into East End, The Tribune met a line of vehicles at a standstill in the road near the University of the Bahamas' Northern Campus. Motorists in small vehicles feared that they would not make it through the standing water.

One woman who said she lost her entire family in East End, and had not heard from her daughter who was in Sweeting's Cay, was among those trying to get into the area. After waiting for awhile, the distraught woman and two other people asked a man driving a truck to take them across the flooded highway. He agreed and the group hopped on the back of the truck, then sped off.

Bernadette Thompson and her son-in-law were trying to get to Rocky Creek, a little settlement just before McClean's Town. They too were hindered by flood water on the highway. According to Ms Thompson, two relatives had stayed in Rocky Creek, which is believed to have experienced storm surge of over 20ft. Ms Thompson said she has not heard from either of the men.

"We understood water in Rocky Creek was over 20ft high there," she said. "We heard everything is gone. Two uncles were left in Rocky Creek and so far the two are missing, they decided to stay.

"We came out here to see if we can try to at least make it as far as the caves (at Lucayan National Park) where the road split."

The roadway at Lucayan National Park was washed away during the storm. The break in the road has made it impossible for vehicles to pass.

Synobia Reckley, who evacuated East End, does not know if her father who remained in the settlement, is alive. "Right now I can't hear from him. I don't know if he's alive. I really don't care about the house, I just want to know if he is alive. Hearing he is alive will bring me a little comfort, but to see and hear his voice, I would be really relieved because I cannot eat or sleep, or do nothing," she said.