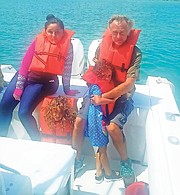 Ted, a Polish Canadian man rescued by the boater crews. 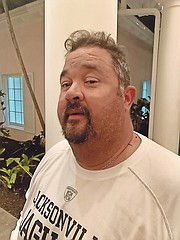 FIVE hundred stranded Abaco residents were rescued by a group of boaters who spent the last few days tirelessly searching for survivors in some of the island chain’s smaller cays.

Volunteer Adam Darville told The Tribune that the group used 12-15 boats, including the power boat leaving from Spanish Wells, Eleuthera, each day before weather conditions caused them to have to halt operations.

It has been a week since Hurricane Dorian slammed into Abaco and rescue efforts are still going strong.

“It’s very encouraging the numbers that we were able to rescue,” he said.

“Most of the people we rescued were all in pretty good shape physically – mainly sunburned and stuff.”

Among those he rescued were a Polish Canadian named Ted (Mr Darville didn’t get his last name) living on Guana Cay, his Brazilian fiancée and three small children and one teenager.

Like many of the volunteers who have worked around the clock, Mr Darville said he immediately said “yes” when he was asked to help with the rescue efforts.

However, he noted that it has taken its toll on everyone involved.

With weather conditions being what they are, he has returned to Nassau and says he needs to rest as he is exhausted.