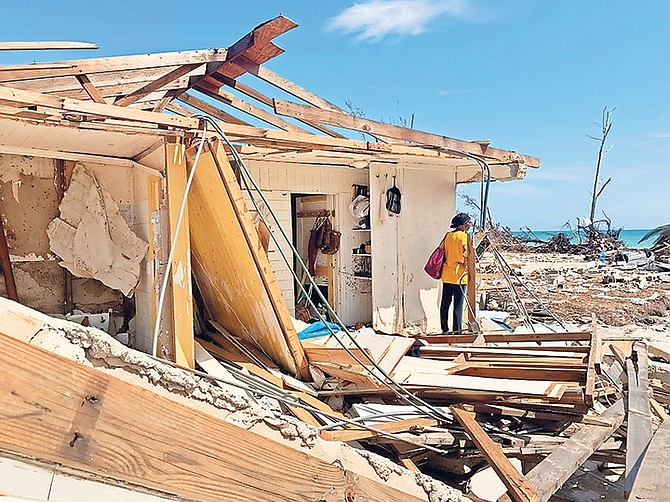 Former MP and Senator Pleasant Bridgewater surveys the damage to the home where she lived with her mother and sister.

It’s the only way they can stave off mounting grief from the unimaginable, and still uncalculated loss as they wait for relief with little contact from the outside world.

The Category 5 storm ripped through close-knit communities filled with generational homesteads for more than 24 hours, washing away all trace of loved ones and leaving the landscape almost unrecognisable.

Most neighbours have deep familial ties, making the loss experienced by survivors in the settlements of Gambier Heights, Bevans Town, and High Rock, unbearable.

Pinder’s Point was said to have been completely decimated, and residents in High Rock have reportedly only found three bodies out of 15 known to be missing in that community.

And although they believe the worst, some residents still prefer to say those lost in homes reduced to rubble or swept away by violent storm surge that swelled more than 20 feet high are missing.

“I just call it missing than to say death,” said Dunlock Munnings in High Rock on Saturday. “Death is not the word I want to hear and death I will never believe until I see it. So what I’m saying is they’re missing, and who do it, nature.”

Mr Munnings was at the North Riding Point Club when the storm hit, and when he returned to his home in High Rock there was no trace of his 53-year-old wife, Maria, 29-year-old son Raphael or six-year-old grandson DJ.

“It’s mental,” Mr Munnings said when asked how he was coping, “no routine. It’s survival.”

His brother Randal Munnings, Sr was visibly angered by the widespread loss to his family. Another brother, Charles has lost his daughter Monique and her children.

“What do you mean hoping for? They get washed away,” said Mr Munnings Sr.

As The Tribune walked through several settlements on Saturday, most residents could be seen cleaning out their homes, sweeping out debris and drying out anything that could be salvaged - which was very little.

For some, keeping busy was the only method to fight the overwhelming degree of sadness and despair.

In Bevans Town, Peggy Bridgewater, 57, said she could barely recognised the area when she returned after the storm.

Her cousin Romeo Bridgewater was missing, with only a pile of rubble and two walls to mark where his home once stood.

The home where her mother Coramae, and sisters Natasha, and former Senator and MP Pleasant Bridgewater, lived was gutted. The women had all evacuated the homestead Peggy has known all her life, in the distance the view of the sea looked serene and picturesque.

“We had no idea where we were until we realised that certain things looked familiar,” Peggy said, “couldn’t even tell it was the town that we grew up in.”

She added: “It’s a state of shock because my other sister, her house is destroyed, my brother, his house was covered with water. We had another house at Barbary Beach area and that is just a frame. All in all it’s just two houses that all the family have together left.”

On Saturday, Peggy could be seen moving saltwater drenched church gowns and hats into a pile. She explained she was saving them for her mom to make the final determination on whether to toss them out.

“To be honest with you,” she said, “I’m at the point of just wanting to just start over, and when I say start over not even here on the island. But for my mom this is her all and all, her everything. This means she’s lost everything, all memory.”

The family lost its patriarch Prince Albert Bridgewater last year, and Peggy said her 88-year-old mother had been trying her best to hold onto anything that could invoke his memory.

She appealed to the government to lift any red tape that could be potentially stalling aid, and suggested supplies and relief should be sourced from other islands.

“They don’t even have food to eat,” she continued. “Even the people that have the food with them that they were able to save, it’s now being minimised. They don’t have much and now the other family members are coming in from one area that was able to ride out the storm for food because it’s so limited. We are almost running out of water and all so why aren’t they just coming and going to the house they don’t even have to come out, just throw it.”

The government has said its relief efforts into East Grand Bahama were hampered by breaches in the road connecting it to others parts of the island. Relief began trickling into East End on Thursday as crews continue to clear a path to the eastern tip. According to residents, the first aid packages came from the US by helicopter, with the Royal Bahamas Defence Force and Ministry of Works coming to do preliminary assessments on Thursday. On Friday, tracks were cut short some 200 yards west of Pelican Point as helicopters and drones flew overhead.

The road has been completely chopped up in some parts, exposing underground cables and limestone with every utility pole either down or snapped off. Pockets of earth several feet deep appeared to have been scooped up and flung from all directions as the roots of trees, and in some parts mangroves, had been upended. A downed service tower, made of metal, was bent in two different places and underscored severity of the monster storm’s catastrophic impact.

Back in High Rock, Ron Smith’s home was completely destroyed, but he could be seen intently sweeping out a room in his neighbour’s home that was filled with debris, seaweed and Sheetrock.

Mr Smith, 50, had stayed in the settlement because his older brother, Clarence Jones, 61, - who is now missing - had refused to leave the area and was handicapped. He ended up spending about four hours stuck in a tree after he was swept out of the house and into nearby bushes by the storm surge.

Mr Smith said: “I couldn’t left him in a wheelchair by himself, so just stay with him in case anything but when that surge came in with the water I tried to take him out the wheelchair and he was pulling the next way. So I try to see if I could find some other solution but it broke out the window and as I came around the current just take me into the bushes and I had to get up into the tree.”

During that time, he told The Tribune all he could think about was his brother.

“My mind was on my brother, I mean I only stayed for him. The police came by me and said well if I was coming out, if I was gonna evacuate but I told them no.

“This my neighbour house, my house, that gone,” said Mr Smith, as he swept, not stopping for more than a couple seconds during the interview.

“I had a handicapped brother in a wheelchair, he went missing. My neighbours went missing, his wife, him and his daughter. I only stayed because he stayed.”

Mr Smith added: “I’m a Bahamian, I hear everybody talking about going to the States. I don’t plan to go to the States to live like no immigrant. “I’m a Bahamian I ga just thug it out and try to get Grand Bahama built back up. If He (God) brought me this far I could just take control from there.”

Several houses down, another brother of Mr Jones, Kenneth Rolle, 58, said he knew they would only be looking for his brother’s body.

“I just want to find the body, but to tell you the truth ain’t no alive in it,” said Mr Rolle. “I wouldn’t be that foolish, maybe if he could have helped himself but he ain’t had no strength like that.”

“More people get hurt in this storm than ever,” Mr Kemp said. “Everybody in this settlement was touched by something that has gone wrong. Most people house total, house totally gone, totally gone.

He continued: “It’s hard but you hardly could grieve. It’s hard to grieve in the sense that because you’ve got your own things to think about and then to think about the other people’s problems too. If you ain’ wanna go over that line, you gotta just keep a little balance, everybody need some help.”

Mr Kemp added: “The worst part is actually the lives that have been lost during this storm and they’re all close family.”

In Gambier Heights, Pastor Preston Cooper, the PLP’s candidate for East Grand Bahama in the last election, said eastern communities had been totally isolated from the west in the days following the deadly storm.

He was struggling to coordinate relief efforts with no car or phone service but was confident he would be able to set up a feeding centre in the coming days. His church has been gutted but he was determined to hold a church service in its yard yesterday.

“It’s very important because my people need home,” he said, “the storm is gone, we have rise and shine to play the hand we were dealt.

“God has given us this indomitable spirit inside of us that we have to be able to tap into that and go forward. We cannot just say have a pity party that’s not His purpose for us we are victorious people even in the midst of storm.”

One week later and help still hasn't gotten to many of the survivors....one can only begin to imagine how many have needlessly perished in the aftermath of Hurricane Dorian while waiting for water, food and other basic help. Someone's incompetent hands are dripping with blood!

why can't they enter from sea or air.

God has given us this indomitable spirit inside of us that we have to be able to tap into that and go forward. We cannot just say have a pity party that’s not His purpose for us we are victorious people even in the midst of storm.”

We will rebound, stronger and better. Let us continue to pray and lend support to our brothers and sisters in Grand Bahama and Abaco.