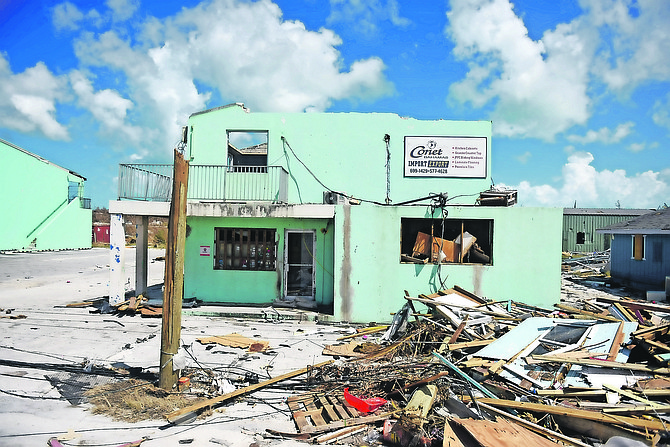 AS survivors of Hurricane Dorian face the challenge of rebuilding their shattered lives, there is also the constant fear that desperation and chaos will lead to violence.

Sandra Sands, whose home was completely destroyed in the storm, told The Tribune efforts to salvage property and begin to rebuild are already being hampered by looters and criminal activity.

She said that when she and her husband, Reginald Sands, went to check on how their places of employment had fared – the Quality Star gas station and Abaco Hardware respectively — they found that looters had already snatched what they could from stores in the area.

“They took everything from bedspreads to washers and dryers, to pencils and crayons. They had trolleys full of items from the stores. They raided the liquor store. I don’t understand why you would need washers and dryers at this time; everything has been under water. They stole every gun and all the ammunition from my husband’s place of employment (the now destroyed Abaco Hardware), and the two young officers from the Royal Bahamas Defence just didn’t know what to do,” she said.

Mrs Sands said Abaco is unsafe to live as every business and home has suffered major damage.

“It is like a bomb went off and smashed everything,” she said.

She said the threat of gangs preying upon people’s vulnerabilities is a very real threat. She and her husband spent their final night on the island on Wednesday, listening to gun fire in the distance. She is begging her fellow residents in the close-knit community to leave the island so it can be properly cleaned and the dead can be disposed of before everything descends into chaos.

“There is nothing left on Abaco. Man-O-War Cay is 95 percent gone and there is no communication, ALIV is on, but BTC’s tower was cut in half. For every five utility poles, four are properly down. Most of the homes have wells, but the water table has been compromised and so you cannot use those wells,” she said.

And although Mrs Sands said she understands it will be a major challenge to relocate the thousands of residents, ensuring people have somewhere to peacefully rebuild is the most important thing right now.

The rebuilding process won’t be easy. While she and her husband were fortunate enough to have home insurance, many residents of the island, who had still not completely rebuilt from prior storms, do not.

It makes her worry for her neighbours.

“You want to be in a position where you can help them, but you can’t and they can’t help you, because everyone is in the same position,” she said.

Mrs Sands said she is haunted by the passage of the storm which she and her husband survived by huddling in their home.

“My chandelier was swinging and our house was rocking like I was in a boat. And after 37 years of marriage, I left with just one suitcase.”

She is also haunted by the deaths the storm left in its wake – parents who were unable to hold on to their children and elderly people who may have survived the initial passage of the storm, but not the aftermath.

She and her husband, along with one of her granddaughters, were initially evacuated to Eleuthera and are now headed to the United States to live with her daughter.

“I just need to get away for a while,” she said.

And while she is relieved to temporarily leave the nightmare behind, she fears what she will find when she has to eventually return.

“I wish that I had more time to go through my house to look for things that I could salvage, memories like my photographs, but I am afraid that they will get into my house and take what they want and there won’t be anything left.”