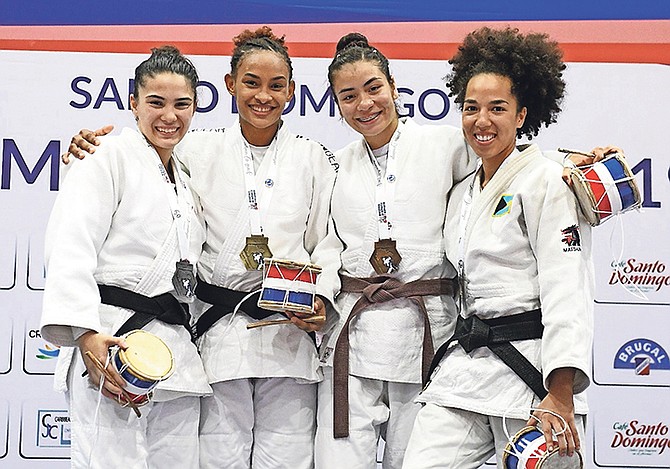 ROAD TO TOKYO OLYMPICS: As the lone Bahamian judoka competing in a field of 146 judokas from 20 countries, 25-year-old Cynthia Rahming (far right) secured a bronze medal at the Pan American’s Santo Dominican Open over the weekend.

In her continued trek towards cementing her berth in judo for the Bahamas at the 2020 Olympic Games in Tokyo, Japan, Cynthia Rahming secured a bronze medal at the Pan American’s Santo Dominican Open in Santo Domingo, Dominican Republic, over the weekend, improving on a fifth place finish two years ago.

As the lone Bahamian judoka competing in a field of 146 judokas from 20 countries, Rahming advanced through the under-57 kiloclass or 127 pounds where she won her opener against Marialy Marte with two wazaris (1/2 point) by throwing down the Dominican Republic’s best junior.

The 25-year-old Rahming, who was accompanied to the competition by her coach Amarilis Savon from Miami, Florida, followed that match with a keenly contested battle against Ana Rosa that eventually saw the Dominican Republic’s best senior pin the top Bahamian on the mat in the end.

That enabled Rahming to contend for the bronze medal where she overpowered Dominican Republic’s Clara Barinas Benitez for the wazari and then arm barred her as they competed in the repechage for their final overall positions.

“I had in my mind when I was going to the competition that this would be the time for me to get the continental medal, especially because this is one of the last competitions to be held on this side of the world before the Olympics,” said Rahming, who has provisionally qualified for the Olympics. “At the beginning of the year, I was really focused on this competition to win a medal. 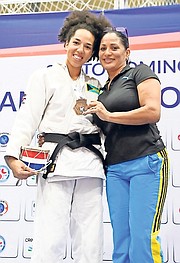 “So I was a little nervous, excited and all of those things that come with wanting to win a medal really bad. The competition was really tough. The Dominican Republic put in a lot of their athletes because they had the home court advantage.”

With her performance, Rahming will remain in the top 10 of the standings, which will enable her to remain in contention for the Olympics where the top 11 judokas will be given a berth to compete in the games next year. “I think it was a tough competition. Everyone really put in their all. Everyone wanted to win,” said Rahming, the Bahamas’ most successful judoka so far.

“They had their best juniors and best seniors so it was a high quality meet.”

With the Olympics fast approaching, Rahming and her father D’Arcy Rahming, president of the Bahamas Judo Federation, are seeking the public’s assistance in helping Rahming to secure the necessary funding so that she can go to the United Kingdom in October and then Japan in November.

“I have to focus on improving on all of my statistics, including my strength and conditioning,” Rahming said. “They have more athletes there so I should be able to get more experience and competition. Hopefully I can also get some competition while I am over there to see where I am improving and what I need to work on.”

But for now, Rahming said she will just enjoy her success in the Dominican Republic as a bronze medallist as she continues her tremendous stride through the sport and hopefully as the first Bahamian to represent the Bahamas in judo at the Olympics.