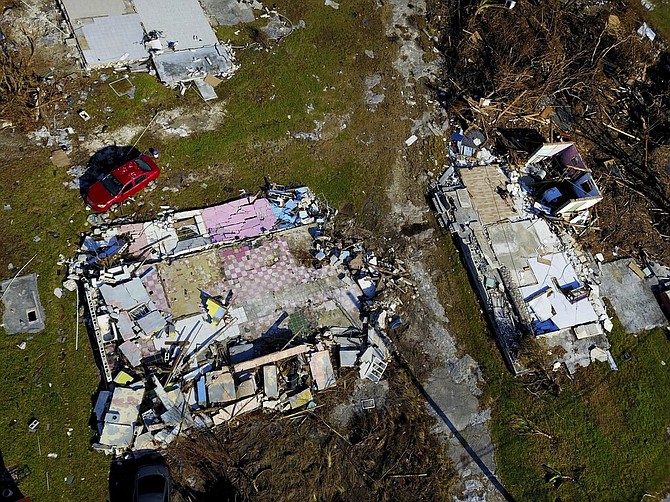 Tim Ingraham, Summit Insurance Company’s president, told Tribune Business that the industry wanted the damage assessment and claims process “to be moving a lot quicker” but had been frustrated by the difficulties associated with accessing the parts of Abaco hardest hit by the category five storm.

His counterpart at RoyalStar Assurance, Anton Saunders, added that the entire Bahamian property and casualty industry was “trying every possible solution” to get loss adjusters into Marsh Harbour and the surrounding Abaco cays so that the process of damages and claims assessment could begin in earnest more than a week after the battering from Dorian.

Pledging that claims will be “fairly paid” based on each individual insurance contract, Mr Saunders reassured Bahamian homeowners and businesses that RoyalStar and the other local underwriters would “stand by them through thick and thin”.

He also urged clients “not to be alarmed” by the release from AM Best, the international insurance credit rating agency, that placed four property and casualty insurers - Bahamas First, RoyalStar, Security and General Insurance and Summit - “under review” as a result of the likely nine-figure claims payouts that will result from the devastation inflicted by Dorian.

Describing the move as standard operating procedure for AM Best following any weather-related disaster, Mr Saunders said RoyalStar, its Bahamian counterparts and their reinsurers have “all the resources necessary” to meet their financial obligations to clients.

While Hurricane Matthew, which struck New Providence, Grand Bahama and Andros in October 2016, generated around $400m in insurance claims payouts, the industry yesterday affirmed that Dorian’s greater wind speeds, storm surge and flooding would likely result in an even greater total settlement.

“I would think this will easily exceed $500m at the end of the day,” Mr Ingraham told Tribune Business. “It’s definitely, in my history of being in the insurance industry, the biggest one we’ve seen.

“There’s going to be a significant number of people uninsured or underinsured. In the past a large number of persons have been underinsured, but we can’t speak to this loss precisely because it’s very difficult to get into Abaco.

“Just to get in there to do a proper assessment has been difficult to this point. It’s been easier for them [loss adjusters] to get into Grand Bahama; they’re on the ground there. They’re just now getting into Abaco. It’s been a challenge. NEMA is not keen on having too many people roaming around Marsh Harbour.”

Such challenges were echoed by Mr Saunders, who confirmed that insurance industry adjusters had been working in east Grand Bahama despite the absence of running water and electrical lighting to assist their claims assessments.

But, when it came to Abaco, which took the full brunt of Dorian’s 185 mile per hour wind and storm surge fury, he added that Bahamian property and casualty insurers were currently debating whether to hire a boat and moor it in Marsh Harbour to house their loss adjusters and claims personnel. Going into Treasure Cay and fanning out from there was another option.

“The industry is trying to formulate plans for how to get on the ground in Abaco,” the RoyalStar chief told Tribune Business, “whether they live on a boat and go back and forth, or we get some clearance from NEMA.

“We want to be part of the solution, not part of the problem. We are trying every possible solution to get boots on the ground in Abaco. We are here to respond to our policyholders and, at the end of the day, hopefully the Bahamian people, the Government, everyone sees the importance of the insurance industry in The Bahamas.”

A swift start to the damage/claims assessment process is vital to kickstarting the rebuilding of communities and homes, not to mention businesses and economies, that have been left shattered in Dorian’s wake.

Any delays in entering the worst-hit areas threaten to further set back the reconstruction process, and the ability of storm-ravaged Bahamians to rebuild and move on with their lives. It also puts back the multi-million dollar reinsurance inflows that are critical to boosting The Bahamas’ foreign currency reserves at a time of depressed economic activity.

“It’s difficult to get a handle on Marsh Harbour and come up with any kind of numbers.... We’d like it to be moving a lot quicker, but unfortunately a lot of things are outside our control right now and we have to exercise some patience until we get into the hardest hit areas.

“It will be a long haul, but not as far as getting claims paid. Hopefully we can get claims paid fairly quickly, and it’s certainly every insurer’s intention to get claims moving and put people in a position to rebuild their homes and lives.”

In contrast, Mr Ingraham said Summit, which is the carrier through which Insurance Management places much of its property and casualty business, is expecting to get “a more substantial report” on damage in Grand Bahama within “the next day or two”.

He added that homeowners had already begun sending in information to support their claims, although reconstruction in central and north Abaco - as well as Grand Bahama - will also depend on the provision of adequate security together with rebuilt road, dock, airport, communications, electricity and other types of infrastructure.

That rebuild, together with non-insurance and underinsurance, and the loss of economic activity, could well drive Dorian’s damage from the hundreds of millions into the lower billions. Grand Bahama and Abaco are, respectively, the second and third largest population and economic centres in The Bahamas, meaning the storm has affected a significant proportion of the country.

Mr Ingraham revealed that, combined, Grand Bahama and Abaco accounted for around one-third of Summit’s insured risks. Mr Saunders added that RoyalStar has 18-20 percent market share across the two islands, but indicated that Freeport - where the majority of insured risks are located - had not fared as badly as east Grand Bahama where coverage penetration was less.

“From a claims standpoint that is probably going to be managed very quickly, and got out the way as quickly as possible,” he said. “All efforts will probably have to be concentrated on Abaco for probably up to a year. You will have lingering claims, some people you cannot find and some people who say they don’t want to come back because they are traumatised.”

It is unclear why A. M. Best has taken this action, since none of these entities have any involvement in Dorian claims payouts. The rating agency, though, could be concerned about the impact the storm’s overall economic fallout will have on them.

“A. M. Best has placed the credit ratings under review with developing implications for the major property/casualty and life/health insurance companies operating in the Bahamas,” it said. “These rating actions are a result of the devastation caused by Hurricane Dorian and the limited information that is currently available with regard to loss of life and property, the status of the medical delivery system and the overall economic impact to the region.

“While AM Best recognises that rated property/casualty insurers in the Bahamas purchase significant catastrophe reinsurance protection for the benefit of their policyholders, A. M. Best remains concerned regarding the scale of potential insured losses given the magnitude of the storm and the absence of timely information.

“A. M. Best believes these companies will make every effort to meet their obligations to their policyholders and restore stability in the region. The ratings will be removed from under review with developing implications following a complete analysis of each company’s financial strength in the aftermath of Hurricane Dorian.”

Describing the review’s announcement by A. M. Best as “standard practice”, Mr Saunders told Bahamian policyholders in the storm-affected areas: “Every claim will be fairly paid based on the contract you have. We will stand by our clients through thick and thin.

“We don’t want the public to be alarmed that we are under pressure or have no resources. We have all the resources necessary. We have a reinsurance table which is one of the best in the world; all rated ‘a-’ and above.

“The message we’re sending to clients is this is a difficult process, especially in Abaco, but we’re getting to you. As soon as possible we will put adjusters on the ground, get there and start assessing, finalising and paying the claims.”

Mr Ingraham and Mr Saunders differed on whether Dorian’s payout will impact Bahamian property and casualty premium rates moving forward, with the former arguing it was likely to contribute to an increase and the latter deferring an answer until RoyalStar spoke to its reinsurers.

The BIA noted that its industry partners, including insurance adjusters and catastrophe response experts, have been engaged and are on standby in Nassau, in Florida and in the region. “Following the ‘all clear’ and with the coordination of the relevant authorities on the ground, teams will be deployed as soon as possible to begin assessments,” the BIA said.​

What part of the well publicized and documented fact that all of Central and Northern Abaco has been completely decimated do they not get? The same goes for much of Grand Bahama. These insurance vultures should simply be cutting cheques to the insured individuals and businesses for the maximum amount of losses covered by their insurance policies, save for third party liability coverages. Instead these insurance vultures want to delay the claims settlement process in the hope of being able to persuade traumatized and desperate survivors, who have lost everything, to sign a piece of paper evidencing their agreement to accept claim settlement amounts that are much lower than they are truly entitled to receive.

The extensive aerial video coverage that has been made public of the complete and utter destruction caused by this cataclysmic event is plently evidence enough that the insurance adjusters and catastrophe experts really have nothing at all to do in the case of the vast majority of the insurance policies. The last thing insured traumatized survivors who have lost everything need right now is stress and pressure tactics from greedy insurers seeking to minimize their insurance claim settlements.

The Insurance Commissioner of The Bahamas needs to get off of her well endowed derrière and immediately make certain expected and warranted public announcements aimed at protecting insured individuals and businesses from the well known predatory practices of property and casualty insurers. These announcements should include full page notices in The Tribune, The Nassau Guardian and The Punch, as well as public announcements on the two main local TV stations (JCN not being one of them). The announcements should also appear on the Insurance Commission's official website.

The Insurance Commission must set up a special 'Dorian' unit within her official Office to handle inquiries and complaints of aggrieved policyholders who have good reason to believe they may be victims of predatory insurance practices aimed at depriving them of the claim settlement proceeds to which they are entitled to receive at the earliest possible time. Insurers found to be engaged in predatory practices should face appropriate penalties including the possibility of their insurance underwriting capabilities being suspended pending the outcome of an investigation of their conduct by the Commissioner's Office.

Honestly how many homes were Insured? I'd say less than half. Then What?

More like well in excess of a billion dollars

Some stupid insurance people we have this in the country. What is there to send an adjuster to assess. WAKE UP!!! The place is a war zone, flattened, gone, finito, what don’t you greedy insurance companies understand about that????

Insurance companies to give, they take. We give them our money, and they tell us what they are going to pay out from the money we give them.They are a rip-off .

Good ahead, send your adjusters, when they trip, fall and get injured then need to be airlifted to Nassau, wasting mor3 resource and people’s time, you’ll be adjusting alright!!!