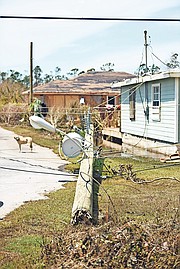 In a press statement yesterday, BPL said there are no standing electricity poles along the 16-mile stretch of road from Marsh Harbour to Treasure Cay.

Given the extent of the damage, the power provider said rebuilding the network in Abaco will require a massive level of effort. As a result, the company plans to utilise relationships with partners in CARICOM through the Caribbean Electric Utility Services Corporation (CARILEC).

BPL has also received offers of assistance from the United States and Canada.

However, this illuminates concerns regarding housing for crews, with BPL noting there was nothing left standing in Central and North Abaco that can house the number of people required to do the work.

BPL said it was working to solve this logistical problem and will update the public when a solution has been identified.

"Bahamas Power and Light Company Ltd has completed an assessment of our system in Abaco from Sandy Point in the south as far north as Treasure Cay. We could go no further," BPL said.

"The situation in the north of Abaco is dire. There are no standing electricity poles along the 16-mile stretch from Marsh Harbour to Treasure Cay. Our infrastructure along that stretch has been obliterated.

"From our power station at Wilson City to Marsh Harbour, there are two power lines. One of these lines is a total loss. Forty to 60 percent of the other line will have to be rebuilt.

"In Marsh Harbour, our entire distribution network - that is the infrastructure that gets power from the long transmission lines into the communities, such as is seen on the side of the street - has to be rebuilt all the way out to the eastern shores.

"From Marsh Harbour to Treasure Cay, the entire transmission grid - which transports electricity long distances with higher voltage, such as can be seen along highways - will also have to be rebuilt."

In Treasure Cay, the entire distribution network has to be rebuilt, BPL said.

"No one from our team has yet been able to go north to Crown Haven. We surmise that the transmission grid from Treasure Cay to Crown Haven will also have to be rebuilt.

"There is better news in the south. From our Wilson City Power Station to the main road, there (are) two lines, one of which is in good condition. Less than 100 poles are needed between Sandy Point and Wilson City, which can be replaced within weeks."

BPL noted the international response to Hurricane Dorian has been overwhelmingly positive on the humanitarian front and had been no less positive with regard to our efforts to restore power to the island of Abaco.

"The needed poles for the south and a digger have already landed and are at Wilson City Power Station now, transported by the Royal Bahamas Defence Force. Teams are ready to move out starting tomorrow, and by mid-week we expect the reconstruction can begin.

"The rebuilding of our network in Abaco will require a massive level of effort. To that end, BPL will take advantage of our CARICOM relationships through the Caribbean Electric Utility Services Corporation. In addition to CARILEC, an association of electric energy solutions providers and other stakeholders operating in the electricity industry in the Caribbean region, we have also had contact from US and Canadian companies that have reached out to us with offers of assistance."

BPL said the main concern for the reconstruction effort will be housing: there is nothing left standing in the Central and North Abaco that can house the number of people required to do the work.

"We are working to solve that logistical problem and will update the public when a solution has been identified.

"Our hearts and prayers continue to be with Abaco, and our commitment to rebuild better and stronger remains firm," BPL said.

Why not just simply build out distributed solar on the top of all rebuilt structures in North Abaco? Then no need to rebuild all the power poles and then outcome will be green power (where we need to go in any event). Why rebuild the type of power the world needs to get off (fossil fuels) when you have a chance to go from scratch?

In the wake of seeing what climate change does to the Bahamas will we finally abandon plans to build brand new LNG plants and go with solar?

the need for cable/lines will still be needed, the myth of solar being the answer is just that a myth, it is extremely expensive, want to see the cost, look at the billions Ontario Canada has spent

RIGHT. In addition, when the hurricane carries the roof, the solar panels would not stay put.

Wow, a mammoth task at hand! BPL just can't catch a break, from old, failing engines in Nassau to complete destruction of the grid system in North Abaco. What a set back. Financially, I don;t see how the taxpayers can afford this.