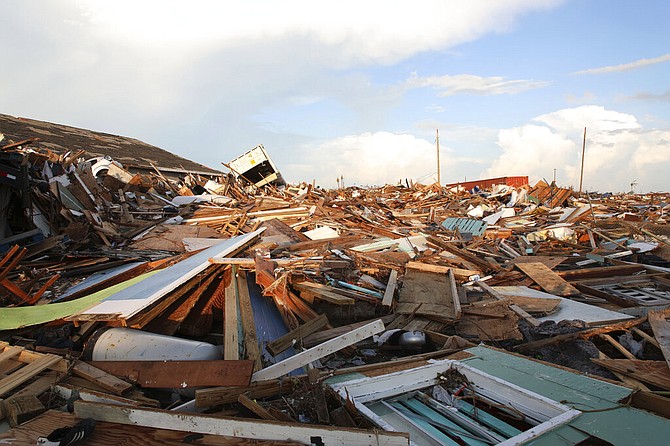 The extensive damage and destruction in The Mudd after Hurricane Dorian. (AP Photo/Gonzalo Gaudenzi)

This, he asserted yesterday, was the best way to assist devastated Haitians living in Grand Bahama and Abaco to rebuild their lives after losing everything to Dorian’s destruction.

His comments came days after North Eleuthera MP Hank Johnson was caught on video by a Florida reporter arguing about the picture being painted of how the Bahamas government is treating Haitian evacuees. Mr Johnson insisted migrant storm victims are being treated fairly and accused a group of Haitians evacuees of complaining.

Meanwhile, Mr Darlier appealed to the government yesterday to enforce a mandatory evacuation in Abaco, telling The Tribune some storm victims were refusing to leave despite mounting health concerns.

However, the chargé said he had no idea just how many people from various Abaco shanty towns were still alive or dead in the aftermath of the storm as the government had not yet communicated its findings regarding those communities.

But what he was certain of yesterday was the larger communities - the Mudd and Pigeon Peas - were completely wiped out, leaving many missing and families desperate to find loved ones.

“I’ve been to the Mudd and Pigeon Peas, that does not exist anymore. There is no Mudd, there is no Pigeon Peas,” Mr Darlier said.

“I go around down there. The reason I went is because they say Haitians shooting at people. It’s not true. I go around but I don’t see no one.

“It’s like a ghost town. My major concern is how are all those people going to be relocated? Some who have insurance, it’s easy for them to get back, but those who don’t, what is going to happen to them? What is the plan for them?

“I think both governments have to sit together to see what plan they can do just for them, especially for those who have nowhere to go.

“I cannot tell the government how to do their job. The Bahamas is a country no one can tell them how to run their country, but what I can suggest for those who are illegal, I think a moratorium is better for them right now especially for those who has been affected by the hurricane.

“In fact, I am not telling them not to arrest those who are illegal in Nassau or wherever else. This is the right of the government. But those who have been victims the government need to do something for them right now or give them some years or whatever else until they regularise themselves.”

Asked if he was referring to a temporary asylum, he said: “Yes, especially for those registered at NEMA as the victims. This will give them time to rebuild their lives.”

This comes as some Haitians have told the South Florida paper the Sun Sentinel they don’t feel safe or welcome in Nassau after being evacuated to the capital.

It has illuminated a long-standing rift between the Haitian community and some Bahamians.

Jocelyn Arty, of the United Haitian Association told the paper it seemed as though the displaced Haitians from Abaco were coming in under the “radar”.

“I don’t feel good. I don’t feel comfortable,” Quetelie Decius told the Sun Sentinel after disembarking a mailboat over the weekend at Potter’s Cay Dock.

Their comments triggered a tongue lashing from Mr Johnson who was at the site. He was captured on video by the Sun Sentinel.

“We give y’all everything possible, we went above and beyond to take care of y’all and you’re here complaining. What y’all want? Y’all want live in Baha Mar? Don’t do that. That’s wrong.”

Mr Darlier was also there and was reported as saying even though there were some irregularities, he wanted things to go smoothly.

I am pretty sure Haiti has not donated one gallon of water or a can of sardines towards easing the burden of its own citizens in this recovery phase but he wants the government of the Bahamas to do what? No country has been more accommodating of Haiti's violations of our laws and sovereignty than the Bahamas, including the recent debacle of the Haitian embassy!

He should be seeking to repatriate some of his citizens in this time of crisis. Its what all civilized nations do!

If he is so worried, he should send a few flights and boats to take them back to Haiti. So many of them were here illegally and he knows it. We have enough to handle with our own people.

If he is so worried, he should make arrangements to take them back to Haiti. We have enough on our hands dealing with our own people.

Sounds reasonable to me, seems the least we can do given they have lost everything.

Bless you. A conservative with a heart. I've never seen one before.

Laughable! They believe the Bahamian people are stupid, & why didn't he ask these same illegal sloop people to stop coming to the Bahamas illegally, because it is a burden on the Bahamian tax payers to send them back to Haiti?

HAITIAN Chargé d’Affaires Dorval Darlier sure has plenty of suggestions for the Bahamas government to utilize Bahamian taxpayers dollars to benefit illegal Haitians. However, he has absolutely not one suggestion about how the Haitian government plans help their own people!

This is a-typical of Haitians across the board. They are always looking for handouts and freebies but NEVER contribute anything to the development of any country.

U.S. President Donald Trump claimed the U.S. has to be careful who it allows in as The Bahamas has some “very bad gang members”.

Because of the Haitian Zoepound gang and Haitian drug dealing activities, Bahamians have lost some of the freedom of travel to the United States! We can thank the PLP and FNM for decades of total asinine jackassery dealing with undocumented illegal Haitians allowing them to gain strong footholds in shantytowns.

PM Minnis needs to be a "leader" just this once and demand these illegals that we do not have jobs for and cannot afford to support that are also damaging to the image of the Bahamas and Bahamians be pursued, apprehended and repatriated regardless of gender!

President Donald Trump is 100% right. America is for AMERICANS FIRST. Likewise, Minnis needs to STAND UP and act responsibly in the best interest of Bahamians.

Pindling, Ingraham, and Christie couldn't do it.....Minnis has NO CHOICE but to do it if he expects his political career to survive!

why can't he charter a plane to take them safely to Haiti?

No, No, and NO, sorry but I haven't heard of any donation or assistance whatsoever coming in from Haiti, so therefor Mr. Charge' d'Affaires organize something, do something, right now we defiantly don't need or want your suggestions

The Bahamas is in a critical crisis, & Haiti's citizens are 95% of that crisis being illegal in the Bahamas. These people believe the Bahamas government is a fool, to keep these illegal Haitians in the country, & we want the best for our way of life, culture in which Haiti can't bring at this time.

So Haiti accept your children they are yours.

Ironic. Paperless Bahamians were turned away from evacuation to Florida. The shoe is on the other foot.

Paperless Bahamians? How does that work???? smt!

This is how it should work...no documents, no entry. Going against this is the root cause of the shanty town catastrophe.

This Haitian man is one nasty guy suggesting all that. He should be focused on making his country better so that his people want to return there. His only focus seems to be getting his people secured in other countries. He's basically promoting illegal immigration.

I've asked several times, with no answer. But I'll ask again: why is the biggest crisis the Bahamas has ever faced being centered around Haitians? Next this man will demand an accounting of all aid received, and that a percentage be allocated to illegal Haitians.

After the outpouring has stopped, sympathy has worn off-the two, three extended family groups in Nassau and US will not coexist in harmony. And it is not a practical expectation. Bahamians and Haitians affected by Dorian are literally in the same boat in terms of loss. Haitians with legal status should receive same assistance as any other. Illegal Haitians should not be considered beyond housing at CRDC and a ticket to Haiti.

I believe a spirit from Haiti is over the Bahamas, why is this guy talking about asylum.. Why don't they carry them back to Haiti... This is crazy.. Why are we even discussing this...