'We Climbed Into Bathtub To Ride Out The Hurricane' 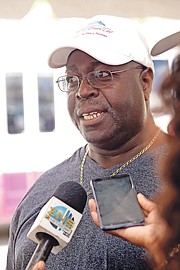 DREXEL Bootle rode out Hurricane Dorian in the bathtub with his wife.

The Treasure Cay resident survived Hurricane Floyd, a Category 4 storm that devastated Abaco 20 years ago, but he told The Tribune that storm was “child’s play” compared with Hurricane Dorian.

Mr Bootle said he always told people he would never want to experience anything like Floyd again in his life.

“Seriously, in Floyd I had 40 inches of rain in my house; this time it was like seven feet of water. I have nine-feet ceilings in my house. About a foot or two from the ceiling the ocean came and knocked all my doors in, blew out windows... it was an experience,” he said.

Mr Bootle said the strong winds, with gusts over 200mph, ripped shutters off the windows.

“It was scary. At one point, the front end of the storm, when my wife told me it looked like water was coming in, I told her to get towels and I heard when she screamed. The doors upstairs blew so I ran from the front door, which was about to cave in, and on my way up (to) my master bedroom a door flew off and caught me (behind my neck) and knocked me down the steps. I was able to catch up with (my wife) and we went back (down) the stairs and that’s where we spent three hours holding on with everything I had. It was scary, we had no place to go. Everyone was affected in Treasure Cay. “

He added: “After the eye passed over, the roof was still on the house but there was plenty water outside. We went into the master bathroom and got into the bathtub and I had to get an office chair and a vanity chair to put over us with the sheets. There was... Sheetrock coming down and that’s where we spent that night...in pouring rain and with the wind blowing. It was scary. Something hit me, I don’t know what it was, but it hit me, had my lip split for a minute, so I see why you have to be careful in the storm.”

Mr Bootle said every time he thinks about the hurricane and his experience, he cries.

Meanwhile, Marsh Harbour resident Lakia Thompson told The Tribune she had lost all of her belongings, but is thankful she survived.

Ms Thompson’s eyes filled with tears and her voice started to crack as she described the harrowing experience.

“During the storm, windows started breaking, the ceiling started falling, water was coming down the walls coming through the windows. I couldn’t get out, all I could hear was loud objects outside moving, winds sounding like the strength of 15 men; it was crazy,” she said.

“There was a lot of damage, everything is gone. The only thing I have left is in this garbage bag. Everything; I lost everything. I’m thankful for life, honestly, because I could have been dead, too. My mom is here, so hopefully I can start over,” she said.

Neil Bootle, a Murphy Town resident, said if someone had told him before the storm that Hurricane Dorian would turn out to be this catastrophic, he would have never believed it.

“It was disastrous. I had to run with my four children, my wife, and even took in someone else who couldn’t talk or hear. The whole house just tore apart. I had to run for my life. Thank God for next-door neighbours; I was able to run to their house,” he said.

“We lost everything. I’m grateful to have made it and I’m very sad for those who had lost their family and loved ones.”

A glossy-eyed Mr Bootle said he is sad to leave his Abaco home, not knowing when he’ll be able to return.

These people went through hell, and have horrific stories. However, none of them can tell us why they were stupid enough to decide to ride out a Cat-5 hurricane!

I can understand if they were caught unawares, but these folks actually just sat down home watching while a forecasted monster storm crept to their front doors.,

I am very happy they survived an unnecessary situation.

And where exactly were the Treasure Cay people supposed to go? To Marsh Harbour where it looks like the same or worse happened to the vast majority of people? Get real and stop victim blaming. If anything, why do ANY of us believe that our homes can withstand a Cat 5 hurricane? We need to start focusing on what we're going to do if another one comes anytime soon.

Where do you propose they go. Some of the shelters were also impacted.

The buiding code MUST change. ONLY rounded such as lighthouses, (or pryamid three sided ?) structures in the areas proned to strong winds and storms... AND we probalby need to build high (split levels, multi floors or put homes on stilts. (According to things I've read, they are the only building structures made to withstand 185-220mph wind storms..) Of course all of this would have to be veirfied. However if we are living in an area where MOST Atlantic hurricanes SEEM to want to travel to/through, we need VERY strong (and unique) building codes..