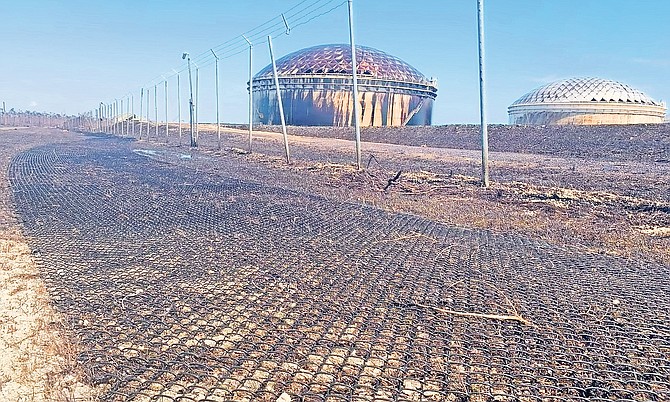 INITIAL assessments of the oil spill in Grand Bahama have revealed the matter is of “no concern” to public health and has caused no impact to the marine environment, National Emergency Management Agency spokesperson Carl Smith said yesterday.

Speaking during a NEMA press conference, Mr Smith added that Equinor, the company that operates the facility, would be sending in an “active clean up crew” from the United States that same day to “manage that oil spill”.

Speaking to reporters outside Cabinet, he said the matter appeared to be a “spill”, not a leak, and that officials are on the ground to manage with the issue.

Hurricane Dorian stalled over Grand Bahama for two days after hitting the island late on September 1. In the aftermath of the deadly storm, photos emerged showing oil leaking from the South Riding Point storage and transshipment terminal. According to Equinor, the terminal has a capacity to hold 6.75 million barrels of crude oil.

“The tanks themselves appear to be structurally intact, and there is no evidence at this time of an ongoing leak. During the storm, the two domes on top of the tanks were blown off by the wind, causing oil from inside the tanks to spill out.

“Since the storm, there has been no continuous impact to the marine environment from that oil spill. An active clean-up crew from Equinor (in the US) is arriving today (September 10) to manage that oil spill.”

When asked to clarify whether there was any marine impact whatsoever, Mr Smith reiterated that Equinor was sending in a team. “Since the incident, there hasn’t been further spillage of the oil,” he added. “And based on their professional assessment, to date, they don’t think that there has been an impact on the marine environment.”

When asked if he was pleased with the response, Mr Thompson replied: “There is tremendous challenges in Grand Bahama as a result of the hurricane. We have thousands of people who are needing housing, thousands of people whose houses have been severely affected as a result of the hurricane. I want to really commend though the Grand Bahamian spirit because those Grand Bahamians have a stickability that is huge.”

Many of us have seen the extensive aerial video coverage and photographs of the areas most impacted by the spillage of oil. How it can be of no public health concern is simply beyond reason and comprehension.

Most of it is contained by the berms surrounding the tank farm. Some has got out, but it's relatively small amount considering what could have happened. We are not talking Deepwater Horizon contamination here.

.Weather it was an spill or leak is water under the bridge.It shows that no amount of pre environmental studies can predict catastrophic results. For the goverment to agree to place Oban on Grand Bahama or anywhere in the Bahamas would be like setting this country up for an environment disaster combined with a natural disaster when ever the next hurricane comes along with Oban in place.Dorian was a warning. The disaster at sorth riding point was a small example that can be multiplied with an Oban installation.The government should tell the Oban principles that they are not welcome in the Bahamas. They donnot want Oban in their own country.do not let them take Bahamians for fools.Listen to the envionmentalist. Donnot let the money hungry principles place an Oban ticking time bomb in the Bahamas for the greed of a few people.Mother nature sent us a signal with hurricane Dorian, The Bahamas is in hurricane alley. Cat 5 are becoming more normal.We as humans have a 20 year window to reverse the amount of carbon dioxide we are placing in the atmosphere. we are above the 405.0 PPM today double what it was from the 1960's .Mother nature will reach the tipping point of no return around 2050..Our children and grand children will may not have islands to live on. The Bahamas may very well cease to exist as a country.While the Bahamas on a global level is not responsible for this because we are a small country with a small economy, we can become an example to the world by switching to the green economy..Oban is a step backwards, Make the likes of Peter Krieger and Satpal Dhunna, Oban Energies’ persona non grata in the Bahamas.They can only come here as tourist.Take heed Governments now and in the future, all proposed investments are not suited for these islands. Mother nature is speaking to us with the increase in Hurricaine's Take heed or watch human suffering multiply around the world as it has begun in the Bahamas and many other countries.