'We will rebuild Grand Bahama' 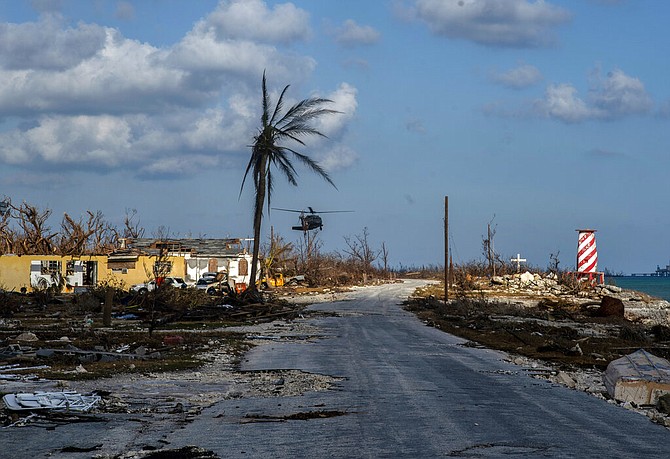 BOTH the government and the Grand Bahama Port Authority yesterday pledged to rebuild the storm-ravaged island as critical needs for housing and basic relief remain high.

The level of desperation on Grand Bahama is widespread. GBPA executive director Rupert Hayward estimated 3,000 homes have been badly affected or completely destroyed by Hurricane Dorian, telling The Tribune the situation was a "tight rope".

He said the number of displaced people on Grand Bahama ranged between 10,000 too 15,000, adding that water would be a continuous need until potable water was restored. With only one well working, he said the port's water supply was at 30 percent.

The situation is so desperate for some, The Tribune was told one young woman attempted to give her one-month-old baby to the Grand Bahama Children's Home yesterday. But the home was completely flooded by the storm, forcing its 32 children to evacuate late Monday evening in rising waters. The residents of GBCH have been relocated to Nassau.

The home will not reopen for at least another two months, said GBCH executive director Sheila Smith, who anticipates the home will also need to take in additional children from Abaco once it is operational.

Five of the home's employees are now homeless, and the only thing they could do was call the Department of Social Services to arrange for the woman and her child to be taken to a shelter.

Ms Smith said: "A lady walked up to the children's home with a baby. She said 'I come to give you the baby. I have no place to live, can you please take my baby?' Everyone started to cry, it was heartbreaking. She said 'can you take my baby?' It's unbelievable.

"I don't think I'll ever forget the look in that woman's eyes when she said 'can you take my baby?' She was so despondent…I'll never ever forget that look.

"This is a woman at the end of her rope, and I just wish that I had a place for her, but just like her I lost everything in the flood.

"She didn't want to go to the shelter, but she had no choice," she added.

Outside Cabinet in Nassau, State Minister for Grand Bahama Senator Kwasi Thompson acknowledged there were thousands who needed housing, and others whose homes had flooded and were still uninhabitable.

While pockets of the island have had electricity restored, Mr Thompson noted only half of the island's water supply had come back online, and there were hundreds still at shelters.

Mr Thompson pointed to commitments from both Carnival Cruise Line and Royal Caribbean International to continue major projects planned for the island - the cruise port, and the Grand Lucayan hotel and harbour development respectively.

He reported to the media that the National Emergency Management Agency has been supplying food and relief distribution networks with partners like the Grand Bahama Christian Council.

"I want to commend Grand Bahamians who are resilient," Mr Thompson said, "and we see it in the thousands of them that have already begun that process of clean up. Thousands of them have begun the process of trying to put their lives back together.

For his part, Mr Hayward said while there has been some power restoration, it should not be taken as a sign the island did not need help.

"It's a tight rope that we run here, we have to give people confidence in our infrastructure which fared remarkably well to the size and scale of the storm. But I don't want anyone to be complacent about the level of need here in Grand Bahama, that need extends to rehousing, building materials. We have to give Bahamians the tools to rebuild their lives."

Mr Hayward said the authority was focused on a redevelopment strategy that would combine strategic aid and NGOs to rebuild the city "better and stronger".

He asked the community to be patient and remain hopeful as the authority was doing all it could to bring relief within the fastest possible timeframe.

"Our principal focus and legal role is to get city services up and running," said Mr Hayward, who praised his team's commitment to working 20 hour days to restore the island in the shortest time possible.

Mr Hayward told The Tribune he could not give a cost of the devastation as all efforts were currently focused on providing relief to residents.

"I am sure there are people who are in very desperate situations," Mr Hayward added, "You can't get everything to everyone straight away, there are always constraints with level of destruction. Bear with us, we are trying our hardest. We will get them what they need and we will get this city up and running better than it has ever been before."

Verdict is still out how FREE port's foreign quasi government matched up central government's dismal response to brungs urgent emergency services and and relief to the thousands distressed comrade Out Islanders on the colony's Abaco's, and Grand Bahamaland's two populaces separated by the exclusion clauses written into Hawksbill Creek Agreement Grand Bahamaland's "unofficial constitution", yes, no ....