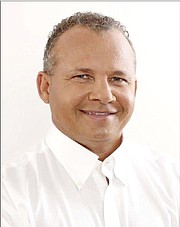 A leading realtor yesterday revealed that “bottom feeders” are inquiring whether they can purchase Abaco real estate cheaply as a result of Hurricane Dorian’s devastation.

Mario Carey, pictured, founder of Better Homes and Gardens Real Estate MCR Bahamas Group, told Tribune Business he has already fielded inquiries from persons exploring whether they can obtain a deal after much of the island’s economy was levelled by the category five storm.

“People are inquiring whether real estate prices are attractive for land. Can we pick up a deal in Abaco? It’s a funny conversation to have.”

Mr Carey added said Dorian had created several knock-on effects for Abaco and the wider Bahamian real estate market, with the principal questions for the former being whether businesses and households decide to rebuild and the financial incentives they will receive from the Government.

“I think the way Abaco will be impacted is that people will have to decide if they want to rebuild, what the building code will be, and what incentives the Government is going to give such as duty-free,” he said.

“For them to rebuild the Government will have to provide the infrastructure, which we have to assume will go back in, and build airports and all the stuff we need... People have to then decide if they’re going to rebuild, and if so on what terms, and what incentives there will be for them. People want to rebuild and move back to Abaco to enjoy the island and all it has to offer.”

Mr Carey added that Dorian’s impact on Abaco and Grand Bahama had also reinforced the impression that Nassau, and New Providence, were a safer real estate investment proposition given that the island seemed to be impacted less by major storms.

“Nassau is going to be shown to be a safe place to invest,” he told Tribune Business. “Go heavy on Nassau because people are confident that hurricanes don’t impact Nassau like other islands.

“That’s the message. You’ve got to believe in Nassau. Nassau is on an island and has a lot of city issues, like crime, congestion and power, and the need for proper re-zoning and understanding density demand, especially for waterfront properties. You can’t tell someone they can only build six storeys high when they have to pay so much for the land.”

The Better Homes and Gardens chief added that the influx of Dorian evacuees from Abaco and Grand Bahama had pushed “the demand for rental properties in Nassau to a very high peak”.

He said affordability would likely become an issue for those evacuees who were now out of work, and queried: “Are government going to help to subsidise rents, or will the non-profits do that. The question needs to be answered by somebody. It’s not easy.”

Mr Carey also suggested that some landlords may be reluctant to accept Dorian victims due to fears about their inability to pay rent, and that they may become tenants for some time.

“From the real estate perspective, Nassau is in flux for sure,” he said. “We have huge demand for rental properties, but unemployment is going to increase. How can we absorb this new demand for jobs?”

Mr Carey said several of his family members had to endure Dorian in Abaco. He said one cousin, who had been evacuated to Florida, was unable to recall much about the storm while another was in a West Palm Beach hospital having undergone another surgery on Tuesday for a variety of ailments including a broken rib after “the roof blew off and he was sucked out”.

“I think people are in shock. How many storms are like that?” Mr Carey said. “Ninety-nine percent of people I come into contact with refuse to give money to the Government as they don’t trust them.

“That’s scary. Big corporations are giving, but the average person prefers to give to HeadKnowles, Rotary and the Salvation Army - not the Government. There’s a message there.”

Mike Lightbourn, Coldwell Banker Lightbourn Realty’s president, said of Dorian’s impact on the industry in Abaco: “As far as I know most real estate offices have been smashed, if I can use that word. There are no phones, and What’s App seems to be working best.

“It’s going to take a while, I’m afraid, and I don’t know how long it will be before we get infrastructure back in place - water, electricity. The market is dead now, as you can imagine. It’s going to be a slow climb back as people start to rebuild.

“I would say the damage is almost immeasurable. I was told by someone who flew over Hope Town yesterday that 10 percent of the houses have roofs on them.”

“Nassau is going to be shown to be a safe place to invest,” he {Carey} told Tribune Business. “Go heavy on Nassau because people are confident that hurricanes don’t impact Nassau like other islands.

Is Carey now adding a little something to the coconut water he drinks?

As expected, the despicable real estate vultures are already buzzing about over the dead carcass of Central & Northern Abaco.

Real Estate agents in general are bottom feeders, they know little to nothing about home construction and maintenance, they know little to nothing about ownership of the piece of land yet somehow they expect to charge you 6% of the price for walking you around and blowing smoke up yours. The lawyer actually makes sure the property has a clear title and registers the deal, the banks appraiser actually makes sure the property is the value of the price you're paying and a home inspector is the one who tells you about the condition of the structure.

Anyone who pays a 6% commission to a real estate agent in the Bahamas today needs to have their head examined and no one should sign an agreement with any of these useless greedy vultures. There are many websites on which you can easily list your property for sale or seek to buy a property, including high-end properties. Uploading video and photos of your property has never been easier. Less than half-a-day's research online could literally save you from being fleeced of thousands of dollars by an unnecessary and useless real estate agent.

Ruthless greedy bottom feeders. Will sell anyone asack of crap if they can. Should be ashamed. I blame the last real estate collapse on them. Only for a commission. Along with the new breed of real estate investors who are creating a homeless crisis. Stupid is as stupid does. I would like to see one person just say NO

An old adage attributed to a Rothschild that seem to hold true even today, " when there is blood in the streets, time to buy" in this case,land... Never thought I would see this in my lifetime ...wowwww.

Feel free to buy all the marsh land you want.

owners will have to decide what they wish to do... hold on and rebuild or sellout and call it quits.. at tge end of the day, its their decision ... nobody can steal anyone else's property.. the legal documents didn't disappear with the storm.. they should be on file in the registry i believe..

Are you kidding?! You obviously have no idea how easy it is for official legal documents to be made to disappear from just about any government office. Happens all the time and usually a corrupt lawyer is somehow involved. Even case files of impending court cases are well known to frequently go missing. It will be interesting to see how many Quieting of Title Notices appear in our local gazettes over the next few years with respect to land in Northern and Central Abaco, Elbow Cay and parts of Grand Bahama. Just about any honest lawyer will tell you that many of our government's digital imaging systems have not been up to stuff. If you have a mortgage loan you should be able to appeal to the lender for an official copy of your title documents.