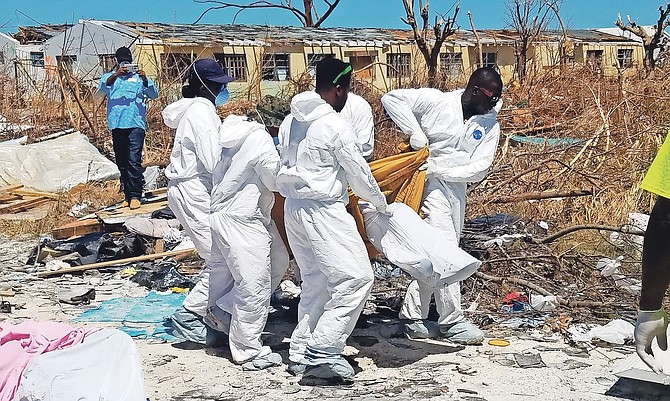 FORMER Prime Minister Hubert Ingraham believes the death toll tied to Hurricane Dorian is in the “hundreds”, giving credence to widespread public opinion that the government has understated the number of lives lost to the deadly storm.

“I speak for myself on the hundreds and I don’t make wild statements,” the former North Abaco MP said yesterday. “I don’t make uninformed statements.”

The death toll associated with Hurricane Dorian has been one of the sticking points of this humanitarian crisis, with the Minnis administration having to repeatedly defend its reporting on the number of casualties. While the government has said death numbers were expected to increase as crews continue to search ruins in Grand Bahama and Abaco, the pace of the official death declarations has been slow. Cabinet ministers said Tuesday the process won’t be rushed and will be handled meticulously.

Yesterday, Mr Ingraham said Dorian inflicted unprecedented devastation on the northern Bahamas and took “hundreds” of lives in Abaco and claimed “significant” others in Grand Bahama.

He said: “Well we have not had devastation of this size before. Abaco has a significant population and so does Grand Bahama. We are not accustomed to having substantial deaths during hurricanes in the Bahamas.

“Generally speaking, they have been very low numbers single digits at most. Whereas in this case hundreds of people have died in Abaco and there are significant numbers in Grand Bahama.”

Asked to explain these comments further, Mr Ingraham said: “It is my opinion. The opinion of Hubert Alexander Ingraham (and) based upon information that I have, based on my knowledge and what not, that hundreds of people have died.

As of Monday, the official death toll was said to be 50. Minister of Health Dr Duane Sands warned last week that the final death count could be “staggering”.

According to Mr Ingraham, there have been some on the ground who have criticised the government’s strategy to get people out of high-risk areas ahead of Dorian making landfall in Abaco.

“So when you talk about mandatory evacuation, we’re talking about places to which people can go and be safe and to give them confidence that they can go to these places and be safe. One of the points about Abaco is the criticism I’ve heard is many of the persons who died are Haitian nationals, many of them are of Haitian decent who are Bahamians citizens who are lawful residents.

“So having taken that into account, the reality is if they had been spoken to in a language I’m told that they could better understand, Creole, that more of them may well have sought shelter from the places. That is one of the things that some people have said did not happen that ought to have happened.”

However The Tribune, while in Abaco ahead of Dorian’s landfall, witnessed officials speaking Creole and accompanied by officers as they warned shanty town residents to evacuate to safer areas. At the time, from this newspaper’s observations, many of them took the warning to evacuate lightly.

Mr Ingraham also said: “Of course governments have tremendous influence and authority without the use of force, just by virtue of being the government and so the government can maximise the number of people who evacuate from a place.

“There will always be some stubborn people who are not going to go no matter what happens but you can get a vast majority of people to follow you if you tell them where they’re going to go, how they’re going to get there. Have you got a safe place for them to go?”

As reports have persisted that many people died in shanty towns in Abaco, the debate has focused on the question of mandatory evacuation. In response, the government has announced the completion of an amendment to the Disaster Preparedness and Response Act to give the law teeth. If passed, the prime minister will have the ability to declare a local disaster area and make the necessary orders for mandatory evacuation.

Speaking on this issue, Mr Ingraham said: “Let’s get something straight - all mandatory evacuation means is that the government says you must move. If you do not move at a certain point in time we are not going to come to come get you, but we cannot make you move.

“How can the government pass a law that says if you do not come I’m going to arrest you, hand cuff you and carry you where? To a shelter and have the police watch you or take you to Fox Hill prison? So mandatory evacuation means that the government will say move, urge (or) urge you to move (and) if you don’t move I am not going to be able to come and get you at a certain time.

“But don’t believe any story that says I’m going to lift you up and carry you. That ain’t going to happen. It doesn’t happen in America.”

In the days ahead, Mr Ingraham said the country would have learned a valuable lesson. That is to take account of the need to have safe storm shelters in respective islands.

With Hurricane Dorian barreling down the illegal Haitian communities on Central and North Abaco, Papa Ingraham ran for the hills and failed to tell them how to go about evacuating their shanty towns that were sure to perish.

Come on papa, I expect better from you! Yes, we can ASSUME that the death toll will be in the hundreds, but we have to speak to what is confirmed and verified. Those bodies have not been recovered and until such time that they have, we can only go on the official count. Also, everyone along the coast and low lying areas were warned to move, I even saw footage of a Haitian Seven Day Adventist Pastor going into the Haitian communities advising the people to move, so don't say that they were not told in Creole. That's nonsense!

It appears that you may have a beef with the good doctor based on the comments that you gave in the Tribune's other article involving yourself and former Prime Minister Christie. If you do, put it aside for now, you have had your time, let Doc chart his own course and if he fails, let the people move him. No need to exasperate the situation any further. By the way, this is coming from someone who supported you throughout your term in office.

Ma comrade Papa Hubert, while I too believe the dead numbers will exceed the government's official count "50" - but think based on what I'm hearing from sources on ground the Out Islands, the final count will end up being more closer to the lower "100" range, we pray, yes, no...indeed every person found alive is life win Out Islanders living with the taxing stress the unknown ....