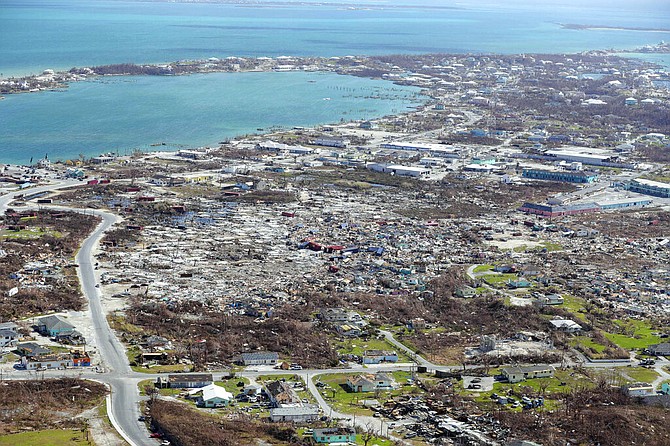 In this photo by the Dutch Defence Ministry taken on Wednesday, the aftermath of Hurricane Dorian is seen on the island of Abaco. Two Dutch navy ships have arrived in the Bahamas to help with the relief operation after the region was devastated by Hurricane Dorian. The Defence Ministry says that around 550 military personnel who arrived Wednesday on board the ships Snellius and Johan de Witt will deliver aid to residents on Abaco. (Sjoerd Hilckmann/Dutch Defense Ministry via AP)

LIVE UPDATES FOR FRIDAY CAN BE FOUND HERE

7pm UPDATE: A tropical storm warning has been issued for several of the northwestern islands, including the Abacos, Berry islands, Bimini, Eleuthera, Grand Bahama and New Providence.

The U.S. National Hurricane Center says a tropical cyclone is expected to form in the coming hours near the northwestern Bahamas. The system is emerging about 235 miles (380 kilometres) southeast of Great Abaco Island. The disturbance has maximum sustained winds of 30 mph (45 kph) and is moving to the northwest at 8 mph (13 kph).

Forecasters say the system could become a tropical storm within the next day or so. Heavy winds and rain are expected within the northwest Bahamas by late Friday, except for Andros Island.

6.25pm UPDATE: PRIME Minister Dr Hubert Minnis has expressed disappointment and surprise in his predecessors, Hubert Ingraham and Perry Christie, over comments they made suggesting he has ignored their capacity to help the country recover from Hurricane Dorian. In an extraordinary statement released Thursday evening by the Office of the Prime Minister, Dr Minnis called their comments misleading and referred to them as an “unnecessary distraction.” Full story HERE

5.20pm UPDATE: Parts of the Bahamas could be set for heavy downpours due to a cluster of showers and thunderstorms.

• From the Associated Press: U.N. Secretary-General António Guterres says he is flying to the Bahamas on Friday to express "deep solidarity" with its people and to raise awareness of the need for international help following the devastation of Hurricane Dorian.

Guterres told reporters Thursday that the Category 5 hurricane, the worst-ever to hit the Bahamas, is "a clear illustration" of the impact of climate change along with cyclones in Mozambique, drought in the Sahel, fires in the Amazon and the Arctic, melting glaciers, and the bleaching of corals.

He said "climate change is running faster than we are, and we need to have a much more ambitious approach in what we do in order to defeat climate change."

The secretary-general is hosting a climate summit for world leaders on Sept. 23. He said he's seeking commitments to carbon neutrality and more ambitious plans to reduce emissions.

• The number of missing persons registered with the government is going down daily. After beginning the process of cross-referencing the different databases, the number is down to 1,300 from 2,500 yesterday. The process is ongoing and the Department of Social Services is working with the police to aid in identifying persons accounted for.

• There are 150 people in shelters in Grand Bahama who being supported by the government. 2,000 remain in shelters in New Providence. These numbers have stabilised over the last few days.

• SOME 2,500 people have been registered as missing after Hurricane Dorian ravaged Abaco and Grand Bahama, though the official list has not been cross-checked against records of evacuees and people staying at shelters - full story HERE

• PRIME Minister Dr Hubert Minnis defended the government’s response to Hurricane Dorian during a national address last night, insisting officials reacted as quickly as possible to the Category 5 storm. He announced that Jack Thompson and Algernon Cargill have been appointed hurricane relief and redevelopment coordinators in Abaco while Senate President Kay Forbes Smith has been appointed coordinator for Grand Bahama - full story HERE

• ALTHOUGH retired from public life, former Prime Ministers Perry Christie and Hubert Ingraham have made themselves available to the government to assist how they can with the restoration efforts in Hurricane Dorian ravaged islands - full story HERE

• FORMER Prime Minister Hubert Ingraham believes the death toll tied to Hurricane Dorian is in the “hundreds”, giving credence to widespread public opinion that the government has understated the number of lives lost to the deadly storm. “I speak for myself on the hundreds and I don’t make wild statements,” the former North Abaco MP said yesterday. “I don’t make uninformed statements.” – full story HERE

• From the Associated Press: Two Dutch navy ships have arrived in the Bahamas to help with the relief operation after the region was devastated by Hurricane Dorian.

The Defence Ministry says that around 550 military personnel who arrived Wednesday on board the ships Snellius and Johan de Witt will deliver aid to residents on Abaco island.

The Johan de Witt is a transport ship that uses landing craft to bring supplies to shore, while the Snellius surveys underwater damage and obstacles in a first step to clearing access to ports and harbours on Abaco.

The ships also are carrying building materials, food and water that can be flown in by helicopters.

Best thing Hubert and Perry can do is fund raise. Lord knows this county is going to need it....

We have many homeless now, open it to them...

Already I am getting reports that on at least one settlement that although few comrade policeman's have now showed up, they are standing around not appearing be doing much, yes, no ...

Neither PLP nor FNM nor NEMA nor the total culmination of Government agencies can handle what needs to be done. Let the private sector tear into this situation without government interference and things will happen 10 times faster. The micromanagement in government at every level is strangulating everything. And they don't know squat.

Ingraham and Christie are cold hearted Bastards to undermine a sitting prime minister in such a disaster. What single man could cope with all that has occurred, especially with inheriting the mini me and micromanaging layers of the civil service that they both created? Disgraceful with Ulterior and self serving purpose evident. Shut your damn pious traps and get dirty like the rest of us fixing our own corners of this disaster. Politics by your hands is now beneath the oldest profession in the world.

Dominica did a better Job without all this bickering.

When the Reconstruction and Redevelopment Authority is established appoint Hubert and Perry as the receptionists.