Minnis Asks - How Can You Help? 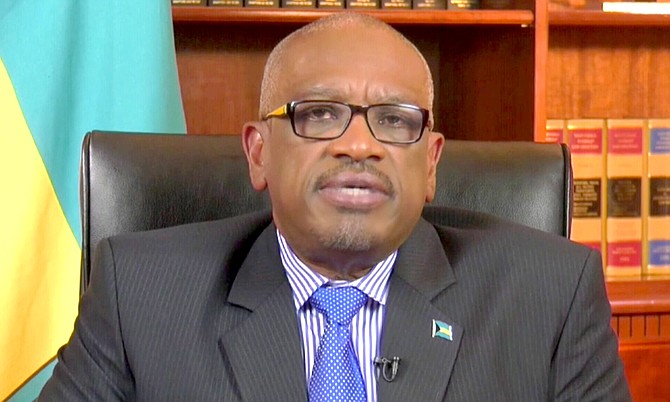 He announced that Jack Thompson and Algernon Cargill have been appointed hurricane relief and redevelopment coordinators in Abaco while Senate President Kay Forbes Smith has been appointed coordinator for Grand Bahama.

He said a national day of mourning is being planned and has ordered that flags be flown at half-mast on public buildings.

The government’s response to the storm has been criticised by some Bahamians and scrutinised by the international press. Some said it took too long to mobilise first responders. Several Abaco residents said insufficient law enforcement officers led to looting while some relief providers have complained about red tape and disorganisation.

Last night, Dr Minnis said his administration is shredding the red tape that has frustrated members of the public who want to help.

“At the invitation of the government of the Bahamas, we asked the US Coast Guard to immediately go into action, using their helicopters and other resources,” Dr Minnis said.

In private, officials have noted the country lacks valuable resources like helicopters for such disasters.

The prime minister said the government is working to set up and secure temporary housing and shelters on the affected islands for people who lost homes.

He praised the United States, saying President Donald Trump has authorised the full support of the US government for this country and noted that disaster management experts from the US are in the country to provide their expertise.

“One of our closest allies and neighbour, is the United States of America,” he said.

“The president of the United States, Donald Trump, has proven to be a true friend to the Bahamas, during this dark hour.”

He also said: “Because of their specialty equipment and resources, the US Coast Guard has been leading air rescuers and transport within the disaster zone. USAID is providing significant relief supplies. Members of the FBI are here too along with other US rescue, aid and security officials.”

He also thanked the United Kingdom, which has sent its Royal Navy; CARICOM, which has sent security forces and aid officials; the Canadian government and the Royal Dutch Navy.

He called on residents to help.

“Instead of criticising those who are trying their best, day after day, in government, charities, churches and volunteers’ efforts, let us all join hands and hearts to focus on the needs of those who are suffering,” he said. “Those whose lives are devastated need hope, love and generosity, not needless negativity.

Describing the destruction Dorian wrought, Dr Minnis said much of Abaco “no longer exists” while East Grand Bahama “has been laid to waste.”

“No living Bahamian has ever seen anything like this in their lifetime,” he said. “But as horrible and vicious as Hurricane Dorian was, the bravery and resilience of the Bahamian people is even more powerful.”

A private accounting firm will have oversight of storm relief donations to the government and will report on how the money is being spent, Dr Minnis said.

Its really simple. In a small country where everyone knows someone who has been affected. The only solution is outside help. Hard for someone to volunteer or turn up for work when they are trying to locate a relative.

Of course for this help to be received, there needs to be a suspension of the mindset that outsiders are invaders. Take the help and be gracious

I hate to be skeptical, but I am not going to believe the words of government until I see it in action. And it must be seen over and over again. Basically, barges of materials need to be allowed to sail from departure port to recipient with no government intervention. No stopping in West End ''to clear customs" they need to open the borders basically. Some will say that is going too far. In my 50+ years I have heard government make hundreds of promises and have witnessed precious few actual follow throughs. My prediction is that there will be mass frustration by the civilian population, the government will not let go of control. The local government boards will still be limited to naming streets in their town while Nassau decides the rest. Prove me wrong Minnis, prove me wrong. Please prove me wrong.

Whilst it sounds good, the items at some point must be cleared by Government. They need to know what is coming into an area. Maybe they should do minimal spot checks but they do need to check.

@Jack Arawak, the government should not let go of control. This is not a free for all. There still needs to be checks and balances. Come on, you know better than that!

The government certainly let go of any and all control over the enforcement of our immigration laws because it suited their interests, not our interests. So now our great secret is out to the rest of the world that the Bahamas has become a satellite state for Haiti within the Caribbean region.

We're just fed-up with successive incompetent governments (PLP or FNM) deciding what and who they want to control for their own political purposes and self-gain with little regard for the interests of the Bahamian people.

Man why you keep leaving China out in your conversations.

Nothing but the usual you know what.

Locals are trying to help, many of them but they cannot because NEMA will not get out of the way.

Highly unlikely ,,and if it is Galanis I will think the same thing as when P Chirstie put Shane Gibson in charge of relief funds when the storms hit when the PLP was in power ,,talk about fox in the hen house

Yes, I think the colony's 'Most Honourable" Comrade Prime Minister, has the concreteness about heself to know exactly what Abacoians and Grand Bahamalanders - be's thinking for 8+ long mornings, afternoons and nights, post Hurricane Dorian - Why in the name Jesus, hasn't we own government come help and save the lives so many thousands we Out Islanders, yes, no .... PM, you must forthwith instruct the Speaker to recall the Populaces House of Assembly to respond all things post Hurricane Dorian ....

The private accounting firm that has oversight of the funds should do the reporting on how funds are spent. Very few trust anything the government would have to say about how funds were spent, based on their track record!

There's no private accounting firm with control over anything when it comes to the actual receipt and disbursement of donated funds not to mention the massive amounts of non-monetary goods and relief supplies. PM Minnis and DPM Turnquest will, true to form, try to control as much as they possibly can themselves. We all now how that goes.