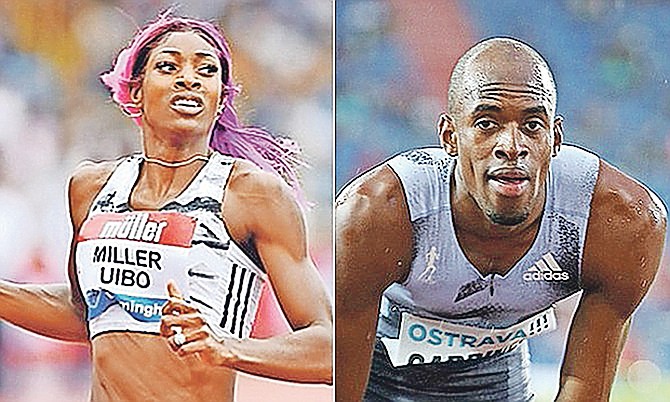 A national fund-raising effort, in conjunction with the viewing of the performances of quarter-milers Shaunae Miller-Uibo and Steven Gardiner at the IAAF World Championships, is expected to take place at the Thomas A Robinson National Stadium to assist those persons affected in Abaco and Grand Bahama in the aftermath of Hurricane Dorian.

Quinton Brennen, the general manager of the National Sports Authority, said they have combined their efforts with a local to put on the “Power of One” beneficiary weekend from October 3-5 to coincide with the IAAF World Championships, scheduled for September 27 to October 6 in Doha, Qatar.

“We came up with the date, which is just one month since the passing of Hurricane Dorian, to put on the event for the people of Abaco and Grand Bahama, who have been traumatised,” Brennen said.

“The first event is a watch party and a concert. We have never done a watch party in this country, so we are inviting everyone to come out and cheer on our own Shaunae Miller-Uibo in her quest for the gold in the women’s 400 metre final and we will do the same for Steven Gardiner.”

Miller-Uibo, still undefeated since her attempt for the 200/400 metre double at the last World Championships in London, England in 2017, is expected to be competing in the final of the women’s 400m at 4:50pm EST on Thursday, October 3.

Brennen said gates will be open at 3pm with just $1 entry fee to view the race and for those that don’t have it, they are requesting that they bring a canned good or two to assist in the food drive for the victims of the hurricane.

On Friday, September 4, the “Jesus in the Park” concert will take place at the stadium when the top gospel artists in the country will be performing.

Like they do the night before with Miller-Uibo’s race, those in attendance will get to see Gardiner perform in the final of the men’s 400m at 3:20pm EST.

The gates, however, will be open at 7pm for the “Jesus in the Park” concert and the entry fee is free.

But a love offering is expected to be taken for those attending the concert.

And on the final night on Saturday, October 5, the all-Bahamian organic Bahamian Down Home Concert will take place.

With the first performance scheduled for 6pm, Brennen said they will start receiving the general public as early as 4pm. The cost is only $10.

“All of the proceeds will go towards the Hurricane Dorian relief efforts,” Brennen stated. “There is nowhere you can go and get this level of local entertainment on one show for this price.”

The NSA and the Ministry of Youth, Sports and Culture will be staging the event with the support from organisations such as Head Knowles, the Kiwanis Club of Nassau, Cable Bahamas and the Lyford Cay Foundation.

“Everybody is involved in it and they are giving us their sanctioning to go ahead with it,” Brennen said. “It encompasses just about every aspect of our society as we join forces for such a major worthy cause.”

While Bahamas Association of Athletic Associations president Drumeco Archer has gone on record to say that if they don’t get the projected $116,000, then the team won’t travel to Doha, Brennen said they are preparing as if the team will be going.

If the team gets to travel, Miller-Uibo and Gardiner, the Bahamian dual 200/400m national record holders, are expected to lead the Bahamas’ charge in Doha. A 10-member team is expected to compete in the championships.