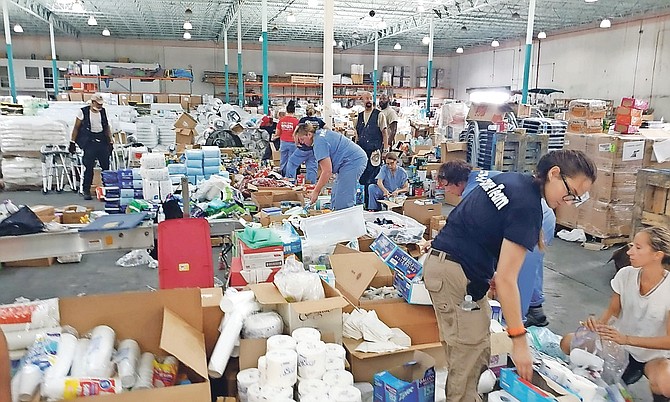 Once the packages were put together and sorted, they were loaded onto trucks and taken into various neighbourhoods throughout the island. Escorted by RBDF officers, NEMA representatives went door-to-door, handing out supplies to each resident in each neighbourhood.

“Instead of having the supplies remain in the warehouse, we want to make sure that once they get in, they are delivered to the communities,” said Senator Thompson.

“These supplies that we see in this warehouse came in last night, so it is critical for us to ensure that if they come in today that by tomorrow they go out.”

Mr Thompson said that while NEMA has set up a number of distribution centres throughout the island, they are aware that a number of people lost their vehicles during the storm as a result of flooding.

“We ascertain the areas and communities in Grand Bahama that were hardest hit by the hurricane and so we want to get to those people first. This is a disaster, and it takes a lot of organisation and planning and that’s what we’re doing today.

“But the most important thing that we can do is get these supplies into the hands of the people who need them.”

The effort was a massive operation, with over 100 volunteers who were busy unpacking, sorting, packing and loading up trucks. In addition to local and NEMA volunteers there was also a group of volunteers at the warehouse from K1 Direct, an NGO and a regional response team based in St Martin whose specialty is assisting with distribution during a crisis. They are presently in Grand Bahama to assist NEMA with distributing supplies to victims hit by Hurricane Dorian.

“The packages include items for a household of four, for four days,” explained Priya Thirumur, the vice-president of K1. “It includes everything from food, to cooking supplies, to hygiene products. From my experience, in a disaster such as this, distribution is the most challenging and logistically complicated process. One of the things that has really impressed me in coming here to the Bahamas is that NEMA and ESF7 are very proactive. Everything that comes in every day is going out to the community. With more manpower now, we are able to get more stuff out more quickly.”

Tammy Mitchell from NEMA said that the supplies are going to residents from East End to West End, in every community. She said supplies are even being distributed as far as Abaco and Sweeting’s Cay and that while the intention is to get items out as quickly as possible, there is still a process that must be followed.

“We still have to check items, we still have to ensure that they are safe to go out to the community,” said Ms Mitchell. “As we’re packaging, nothing is being left and no home is being left out. Every item that we’re taking in, we are trying to get to the homes. We know that this island has been hit very hard, but we’re doing our best to get all of these items out. But we have to make sure that the process is being followed. We’re working from sun up to sun down.”

As the first truck load of care packages pulled out of the parking lot and headed into Hawksbill, Mr Thompson was there and he assisted the RBDF officers in handing out the supplies. As one of the hardest hit communities, the residents of Hawksbill expressed gratitude for having the supplies come to them.

Residents in Hawksbill who were busy on Saturday still removing soaked and mildewed furniture and sheet rock from their homes, and dumping them in the front of their yards, stopped their work and made their way to the truck in the streets to collect their relief supplies, thankful that the aid came to them.