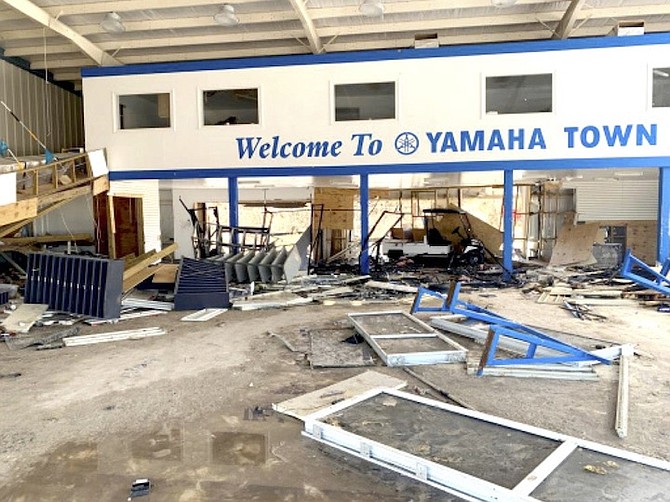 Abaco's Yamaha dealership yesterday said up to 70 percent of its Hurricane Dorian losses were incurred from the looting of 103 engines worth a collective $1m.

Stephen Albury, the Marsh Harbour-based company's principal, told Tribune Business: "We are looking at about $1.4m to $1.8m in losses in inventory as a result of Hurricane Dorian, with $1m of that estimate being the result of the theft of 103 Yamaha engines between Tuesday and Thursday of last week at our store in Abaco.

"We have good information that the bulk of the missing engines may be in the Sandy Point area in the south, and we are currently working with the police - particularly the Central Detective Unit (CDU) in New Providence," he added.

"We had to file a report with the CDU in New Providence because the police presence in Abaco is not being co-ordinated properly. Everyone is being allowed in and out of the central area of Marsh Harbour, and no one is setting up checkpoints in the area to manage the flow of persons in and out."

Mr Albury added: "I've been told by the police that they have found a few of the engines, as well as a few of the suspects have been caught, so we're hoping that the ones already in custody will talk and that would help us to find the other persons involved in the theft of these engines.

"I was told by the police that five of the missing engines were found in a dump truck in the Murphy Town area, as well as a few more that were recovered in the junk yard next to a Bahamas Power and Light (BPL) station."

Mr Albury said the company had also "lost a great deal more" as a result of backhoes and cranes removing debris from around its warehouse. He confirmed that "everything is destroyed" in Marsh Harbour, with the only building left standing being the Maxwell's supermarket.

However, Mr Albury said all his staff and family members are accounted for and safe.

"What I would like is for the communities in Abaco to come together as a group, and allow the foreign aid groups stationed on the cays to assist with rebuilding. We can't sit around and wait for the Government to rebuild Abaco, as it would simply just take too long," he added.

"What we also have to keep mindful of is that many of the people in Dundas Town and Murphy Town have no insurance coverage for their businesses, so we must come together."

Marsh Harbour's on the ground painting a truer picture with no partisan political agenda advance Comrade Stephen, will not transform well fit neatly into what PMO script writers does wants colony's populaces, visitors and investors buy into, yes, no ....

“... will not transform well fit neatly into what PMO script writers does wants colony's populaces ...”

Any translators on duty? WTF language is this?

Bro. Have you ever written a sentence that makes sense?

Look on the bright side they won't be needing to steal the foreigners motors for a while.