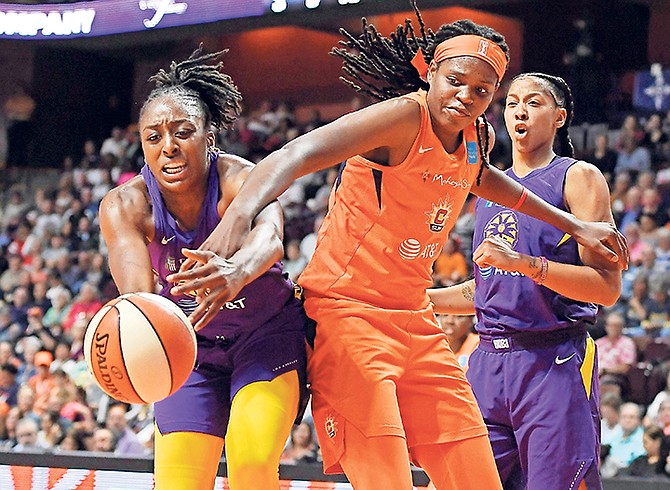 UNCASVILLE, Conn. (AP) — Alyssa Thomas had 22 points and grabbed 10 rebounds to lead a balanced Connecticut offence and the Sun opened the WNBA semi-finals with an 84-75 win over the Los Angeles Sparks last night.

Jasmine Thomas scored 19 points, Jonquel Jones had 16 and Courtney Williams had 15 for the Sun, who won their first playoff game since 2012.

Connecticut trailed by three points at halftime, but scored the first nine points of the third quarter.

A layup by Courtney Williams just before that quarter’s buzzer sent the Sun into the final 10 minutes up 59-58.

Connecticut never trailed in the fourth, outscoring the Sparks 25-17 over the final 10 minutes.

The Sun, who lost their final two regular-season games, had not played since September 8 and came out slow, missing their first four shots.

But Alyssa Thomas quickly found her form, scoring the Sun’s first nine points and had 13 as Connecticut took a 21-14 lead after a quarter.

Connecticut led by as many as 11 points in the second, before Nneka Ogwumike led the Sparks back. She had 13 points in the half, hitting six of her seven shots and the Sparks took a 40-37 lead into intermission.

Sun: Connecticut has won 24 games this season, the most since 2012, which also happens to be the last time the franchise was in the conference semis. The Sun lost in the conference finals that year and have had just 2 playoff games since, losing to Phoenix in the first round each of the last two seasons. Sparks: LA won two out of three from the Sun in the regular season, but fall to 1-2 in Connecticut. It was Chiney Ogwumike’s first playoff game in the arena since being traded from Connecticut to LA in the offseason. She was loudly booed during the player introductions and whenever she touched the ball.